I’ll say this about Ryan Murphy’s new Netflix drama Hollywood: The costumes are fantastic. With its characters decked out in fedoras, three-piece suits and bejeweled ball gowns, the 1940s period piece co-created by Murphy and his Glee co-writer Ian Brennan — debuting this Friday, May 1; I’ve seen all seven episodes — gives us a much-needed dose of old-school glamour during these sweatpants-heavy quarantimes. Ah, but if only the rest of the series lived up to the clothes. This sprawling, ambitious look at the actors, producers and studio executives that created the film industry’s Golden Age sets out to rewrite history, but it gets too bogged down in overwrought sentiment to reach its lofty ambitions.

The setting is post-World War II Los Angeles, with throngs of wannabes crashing the gates of the fictional Ace Studios seeking fame and fortune in “the pictures.” David Corenswet, blessed with matinee-idol looks and dimples seemingly chiseled out of granite, leads an ensemble cast as Jack Castello, a war veteran and aspiring actor who gets hired to pump gas at an L.A. fueling station that, um, pumps a lot more than just gas. Facing a mounting pile of bills and with twin babies on the way, Jack reluctantly agrees to dip his toe into Tinseltown’s sleazy underbelly to earn a buck. 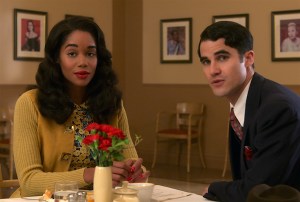 This feels like a passion project for Murphy: an affectionate ode to the glitz and glam of the silver screen, but also a clear-eyed rebuke of the racism, sexism and homophobia that plagued a supposedly open-minded industry. (Plus, it offers a few fun Easter eggs for Hollywood history buffs, with cameos by the likes of George Cukor and Tallulah Bankhead and a twist on Rock Hudson’s origin story.) The usual Ryan Murphy formula is firmly in place here: bitchy one-liners, struggles for LGBTQ equality, grandiose speechifying where characters directly voice their innermost beliefs and desires. But it often falls victim to Murphy’s worst storytelling instincts, with too much telling instead of showing and themes plainly spelled out and underlined in the dialogue. (The opening credits have the cast of showbiz hopefuls literally climbing a ladder, for crying out loud.) 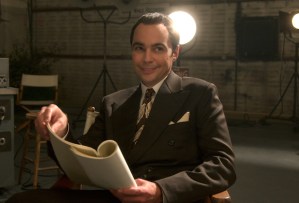 And while it doesn’t shy away from the cutthroat corruption and hypocrisy rampant in the studio era, Hollywood reveals itself to be painfully earnest and indulgent in the end. The later episodes take an abrupt turn towards fantasy: The good guys start winning, as Murphy offers a revisionist take on what Hollywood should’ve looked like back then. It’s an appealing idea, but the result is incredibly corny, and the wish-fulfillment victories feel conjured up out of thin air rather than earned. (lt’s almost a throwback to the maudlin studio pictures of that era, complete with sweeping violins on the score.) Plus, the wicked humor typically found in Murphy’s work is largely missing, so the reliance on raw sentiment is all the more glaring. But hey, there are plenty of half-naked men to ogle along the way!

Murphy has been a prolific producer for a decade now, and his output has been especially strong as of late: FX’s Pose has blossomed into one of TV’s finest dramas, and his first Netflix series, The Politician, had some intriguing wrinkles to it. (It completely vanished from the pop-culture conversation shortly after its debut, though.) Hollywood comes as a disappointment, then, in spite of its stellar cast and admirable ambitions. It’s kind of like some of the big-screen icons that rose to fame in the early days of Hollywood: plenty of gloss, but not enough substance.

THE TVLINE BOTTOM LINE: Ryan Murphy’s Hollywood boasts an all-star cast and top-notch production values, but the story gets stuck in gloppy sentiment.