This week on The Flash, Barry argued that “Iris” isn’t his actual wife. But when it came time to make his case, did the evidence reflect poorly on him? Plus, which blast from the past made a surprise appearance?

Kicking off what was without a doubt the strongest episode of Season 6B, Cisco fired up the artificial speed force he built “based solely on the teachings is history’s most evil speedster,” only to watch it rev up… and then peter out. What’s the missing element? Barry is too distracted to care much. Even when Cecile asks if he wants to go see Iris, he shrugs it off, only sending along the message that he misses his missus. Mirror Iris and Kamila meanwhile report to Eva that the plan is going well, that The Flash’s speed is being steadily drained. Eva aka “Mother” announces it is time to prepare for the next phase, which involves the ladies’ “brother,” Singh — and a surprise asset. 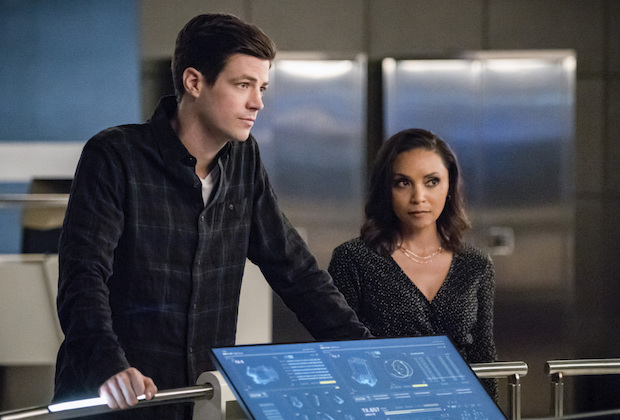 Barry meanwhile springs on Cecile volumes and volumes of hypotheses, theories and white board scribblings proving that “Iris” isn’t really his wife. And though he can rule out Everyman, doppelgangers and shapeshifting Martians, he isn’t quite sure what “it” is. Further bolstering Barry’s case is that photo Kamila took, which got uploaded to the Citizen‘s cloud. Barry, Cecile and Nash thus stage an intervention at STAR Labs, where they invite “Iris” to reveal who/what she is. Barry fires up a prismatic ray that should replicate the effect seen in Kamila’s photo… except it doesn’t. Worse, when Iris turns it on him, Bar turns all pixelated and stuff! As such, it is Barry who gets meta-cuffed and thrown into the Pipeline, suspected of being the actual phony here. (In flashback, we see that Eva reached through a mirrored tray and swapped the light gun with a jerry-rigged version.)

Using his CCPD credentials to secure him and the Citizen gals a visit to ARGUS, Mirror Singh, Iris and Kamila pay a visit to the incarcerated Ramsey Rosso aka Bloodwork! Their mission here is admittedly wobbly — something about a drop of his blood being needed to make the mirrors passable for Eva…? — but it’s a spine-tingling sequence as Mirror Kamila sacrifices herself to short out the force field, after which Bloodwork beasts out a bit. Ultimately, Rosso re-imprisons himself (knowing full well there are walls beyond these walls), but not before leaving a glop of his goo for Mirror Iris to collect.

Seemingly having sensed, via her meta powers, that something truly isn’t right about Iris, Cecile trusts her gut and frees Barry from the Pipeline. Barry speeds to the loft, where he catches Mirror Iris getting the 411 on how Bloodwork’s goo will transmogrify the mirror… or something. He asks, “Where’s my wife?” But Mirror Iris apparently heard knife, because her arms morph into big, slicing, Terminator 2-style blades, with which she begins using to turn the hubs into Swiss cheese, at times even using nearby mirrors to “reach around” and jab him in the keister! For her finishing move, Mirror Iris shatters the mirror above Barry (kinky loft!), and the shards turn into blades as they rain down on the punctured, power-sapped speedster. Adding salt to fresh wounds, Mirror Iris taunts Barry about how oblivious he has been, sharing too-good-to-be true pancakes and his b-e-d (where they have s-e-x) with her all this time.

Luckily, the real Iris is (tied up) in the Mirrorverse, laying witness to what is happening. Realizing the strong connection between Eva and her minions in the real world, Iris starts effing with her captor’s mind, teasing her about her pathetic pining for Joseph. Eva vigorously denies carrying a torch, and her scattered brain begins to impair Mirror Iris. Barry senses a change afoot, likely at the real Iris’ doing, so he tells Mirror Iris he knows a part of his wife’s heart is inside her. He encourages her to “be more” than what she is, but she has to “want it, to choose it.” Eventually, Mirror Iris channels Kelly Taylor and says, “I choose me!” — after which, with a final push from an outraged Eva, she shatters into shards. The mirror then turns into Bloodwork-y goo, through which Eva steps to confront and slice up Barry some more. 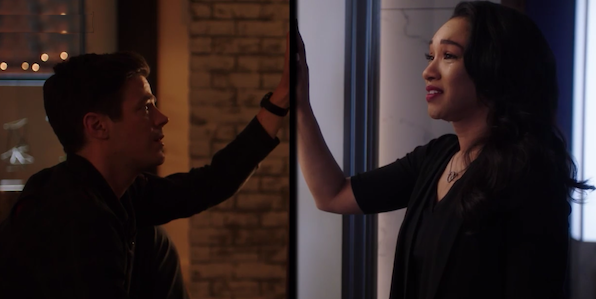 Eva gloats that Barry is powerless to stop her, nor should he, seeing as she has multiple insurance policies trapped in her realm — including Iris and Singh. She announces that she has a whole world to liberate, before stepping away, as Barry passes out. Later, Barry comes to, crawls over to the mirror and speaks out to Iris, hoping that she can somehow hear him. And wouldn’t you know it, Iris is doing same from the other side! Together, they finish each other’s sandwiches, saying, “I just need you to know I love you, that our love is constant across dimensions and across time… to the end of the world and back.” Iris pledges to find Kamila and Singh on her side, “but most of all, I’m going to find my way back to you.”

(Elsewhere, Caitlin briefly slipped into an ice coma, and now needs her mother’s help to rightly recover from her old light wound.)