Warning: The following contains spoilers for Tuesday’s Legends of Tomorrow. Proceed at your own risk!

Just when we thought Legends of Tomorrow was finally going to give us the Zari 2.0/Nate romantic relationship we’ve been waiting for, Tuesday’s episode instead left us with another potential pairing to ponder: Zari 2.0 and… Constantine?!

While trying to find the third Loom of Fate ring, the unlikely allies were transported to a 1910 boarding house where, at first, they mostly bickered about their plan. Constantine underestimated Zari as nothing more than a social media influencer, while she grew impatient with the sorcerer as he failed to locate the ring. When a group of Encores showed up at the boarding house, Constantine ordered Zari to stay put, but she proved herself capable by dressing up as Cleopatra and using her skills to influence the Encores. Then after the two opened up to each other about their emotional pain, Constantine showed Zari a way out of the house. But rather than escaping, she came back to save Constantine’s life once more, using the air totem to deflect a bullet. In the intense aftermath, the two stood close and leaned in for a kiss — until Constantine spotted the ring.

“I think they kind of hate each other, but… there’s a kind of attraction there that surprises them both, and I think it actually surprised both Matt [Ryan] and me, too,” star Tala Ashe tells TVLine. “Living inside these characters, we were like, ‘This doesn’t work, really, on the page,’ and then when we actually started doing scenes together, we were like, ‘Oh, there’s actually something really interesting happening.’ There’s a kind of electricity. Both of these characters challenge each other in an interesting, attractive, kinetic kind of way.”

Below, Ashe discusses the duo’s “inconvenient attraction” and what it means for Zari and Nate. 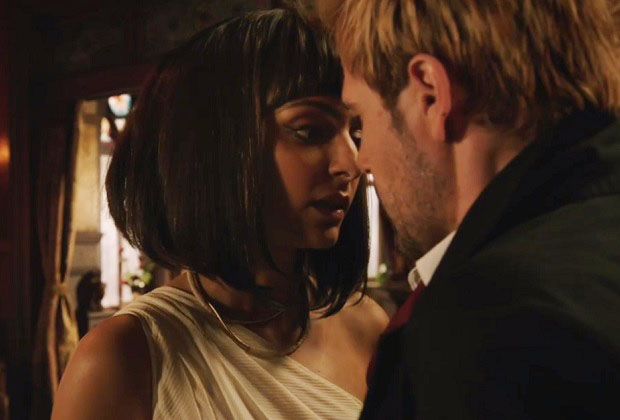 TVLINE | The almost-kiss took me by surprise, even though I spent the entire episode wondering if I was imagining a vibe between the two of them.
They’re kind of fighting what is a confusing attraction for both of them and actually kind of an inconvenient attraction, to be honest, for both of them, given the circumstances and given the Nate of it all. Constantine is not looking for a relationship, not that that’s what this is. It is sort of like an inconvenient inconvenience for all involved, I would say.

TVLINE | What were your and Matt’s reactions when you saw that moment in the script where they almost kiss?
As actors, when you see something like that, it becomes something that you realize, like, you have to earn that moment. You kind of have to build the connection and the relationship and the arc of the story in order to… hopefully earn that. I think we were more thinking about it in those terms. I really love working with Matt, and we sort of have a similar vocabulary. We both come from the theater world. So we talked a lot about what’s really going on between these two. Is it love? Is it an attraction?… We really did think very much about the arc of the story in this episode and moving forward with them.

TVLINE | Was that a one-off, in-the-heat-of-the-moment type of thing, or are we going to see that attraction between the two of them explored further?
Again, I think it’s an inconvenient attraction, but I think it will kind of show itself in certain ways as the season moves forward. And again, I think it does complicate things with the Nate and Zari relationship… It’s not the last that we see of it.

Legends fans, what did you think of Zari and Constantine’s surprising almost-kiss? Are you into the pairing, or are you still rooting for Zari and Nate?