If you were curious just how (ahem) close Earth-Two’s Laurel and Tommy were, this deleted scene from Arrow‘s final season is about to clear things up.

Arrow Season 8 opened with our Oliver Queen (played by Stephen Amell) deposited on Earth-Two’s Lian Yu, from which he was rescued and as such was assumed to have survived the Queen’s Gambit long-ago sinking. In reality, Oliver was on a secret mission for the Monitor, to retrieve dwarf star particles that only existed on that Earth.

Nonetheless, a resurrected playboy billionaire is to be lavishly feted, and at one point during said soiree, Tommy (aka that universe’s Dark Archer, played by Colin Donnell) makes sure that Laurel (aka the vigilante Black Siren, played by Katie Cassidy) knows that the bar is stocked with her wine of choice, pinot noir.

As broadcast on The CW in October, the duo’s banter ended there, followed by a clink of cocktail glasses. But in the extended scene above — from Arrow: The Eighth and Final Season (available on Blu-ray and DVD April 28) — Tommy has a bit more to say, some rrrrribald reminiscing to do. Press play above to watch the complete scene, then read on for more. 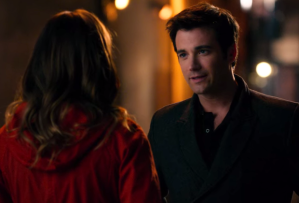 If the dialogue in this extended scene gave you a sense of deja vu — as the “pinot noir” reference did, when the Season 8 premiere originally aired — it is by design. The playful “lapse” debate was a word-for-word callback to one of the final scenes in the series’ October 2012 pilot, when (Earth-One’s) Tommy and Laurel politely disagreed about how much of an “us” they had become in presumed-dead Oliver’s absence (see photo at right).

In addition to all 10 episodes, Arrow: The Eighth and Final Season features a “Best of DCTV’s Comic-Con Panels 2019” featurette, plus the Arrow: Hitting the Bullseye special and other deleted scenes. The Blu-ray set also has a bonus disc that boasts all five parts of the “Crisis on Infinite Earths” crossover plus a half-dozen related featurettes.

(If you buy something through our retail links, TVLine may earn a commission.)