It’s hard to believe that a show as young as NBC’s Good Girls would ever consider offing its No. 1 antagonist, especially when actor Manny Montana adds so much juicy chemistry to the mix. By the end of the hour, we learn that Rio does, in fact, live to see another day — but Beth proves she’s got the gumption to take out her blackmailing boss for good.

The episode begins just four minutes before the hit is supposed to go down, and the women long for it to all be over. Ruby dreams of being a good person again. “Just some normal mothers with their lucrative side hustle,” adds Beth. “Minus the serial-killing, extortionist psychopath.” If only.

Agent Donnegan reviews a list of women who were in the salon on the day of the robbery. Her colleague Henry mentions the church group’s salon trip, and the dogged Donnegan wants to know who planned it.

Beth dances her way through her front door and pops a bottle of champagne, but a booming voice kills her buzz. “What are we celebrating?” It’s Rio, and of course he wants to go for a ride. They pull into a car wash, and as the car is enveloped in darkness, he reaches into the glove compartment and pulls out… a wad of cash. He puts it in a brown paper bag and slips it to someone outside of the car. He tells her she needs a system if she’s going to continue being in business with him, but when she refuses to tell him where her share is going, he says he can’t cut her in anymore. 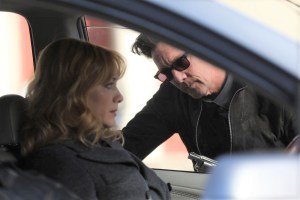 The women go see James Fitzpatrick (aka the man who was supposed to kill Rio); instead, one of his employees give them an expense list totaling $11,000 worth of bizarre amenities, including omakase. They follow him, and once they’ve been made, James tells them the contract has been terminated because they weren’t honest about their relationship with the target. He wants to know who had a fling with Rio because he doesn’t do jilted lovers. Once they say they’re not paying for his incidentals, he threatens them with a photo of someone’s removed tongue, which thankfully, we don’t see.

Meanwhile, Ruby and Stan plan a dinner for the family that donated Sara’s kidney. Stan is uncomfortable, but Ruby refuses to call it off because “our souls could use some housekeeping.” They find out that the donor family literally has nothing; they sold their car and only got to the Hill’s thanks to the kindness of strangers and hitch-hiking. Ruby and Stan reflect on how their guests are good people. “How do we get back to that?” Ruby asks, but there’s no clean-cut answer. Just more turmoil and guilt.

Dean’s struggling with his new job as a driver for food delivery service, so Beth pitches an idea to Rio: They can run the money through a spa dealership. Car washes, she says, are high on the government’s hit list for laundered bills. Hot tub dealers? Not so much. He’s silent at first, which is very on brand, but then tells his guy to pay her. Back on the payroll? Check. New system to wash counterfeit cash? Double-check.

High on a win, she visits James again and he details all the times when Rio is alone and vulnerable. The man has clearly done his research. When Beth hands him an envelope of cash, he asks what it’s for. “Missed opportunities,” she tells him. As she’s walking out, he gives her a time and says he’ll text her an address.

Wowing at the beautiful breakfast spread Ruby has prepared, her guest flat-out asks her for a car. Ruby explains how she and Stan work triple shifts and max out credit cards to get by, but then the woman pulls out the big guns: “Your daughter is sleeping safe in her bed.” Talk about a guilt trip.

Beth meets up with James in an abandoned apartment across from a busy street. He’s setting up a sniper rifle and Rio is right in his cross-hairs. “Say when,” he says. Beth is surprised, and thinks for a second before saying, “Do it. Now.” The gun fires, but when she looks through the microscope, she sees a paintball splattered against a car window. A car that is not Rio’s. “You’re ready,” James says. “I’ll put you back on the schedule.”

After Annie unfortunately fails her GED test, Dr. Josh comes to cheer her up. The two head to a bar to unwind, where she laments the wasted time she spent studying. The two get closer, physically touching after a few laughs, but then he drops a bombshell: He proposed to his girlfriend. (Does anyone out there care about this will-they-won’t-they sitch? Can we just say they won’t and move on, already?)

We close with Donnegan and Henry reviewing a suspect who’s been a long-standing church member and has nothing in her bank account. Donnegan isn’t convinced, but Henry discovers she just bought a car… with all cash. “Guess where she works?” he asks, throwing a bottle of Creamsicle Sunset nail polish across the room.

Is Ruby going to take the fall? Will the show actually pull the trigger on Rio? Drop your thoughts in the Comments below!