The CW’s Batwoman swung back into action this Sunday night — that is, once Kate did what she needed to do to feel worthy of suiting up for her city.

Still lamenting her role in Dr. August Cartwright’s death (and after almost accidentally killing a rando hoodlum), Kate took a knee as the caped crusader, leaving Gotham defenseless for a week. Though the seeming return of one of Batman’s foes, The Detonator, seemed poised to nudge her back into action, Kate instead tried to draw out the baddie as her real estate mogul self. Eventually, though — upon seeing a flimsy wannabe Batwoman nearly die in Mary’s clinic — Kate suited back up, as The Detonator wired up victim after victim with an explosive vest they can either die in, or press a button to detonate a bomb planted elsewhere in Gotham.

When Jacob ultimately became a target, Batwoman as well as Luke zeroed in on the mad bomber — aka the Crows’ Agent Robles. It turns out that Robles was also behind the murder of Lucius Fox, at the bequest of Tommy Elliott. After Batwoman subdued Robles, Luke was spoiling to put a bullet into his father’s killer. But Kate, after being repeatedly waylaid by her own guilt, intervened by spitting out that she killed Cartwright. Using her confession as a cautionary tale to ward off Luke from also ending a life. And sure enough, Luke spared Robles, as he and Kate dragged the bomber away to safety as his latest creation (safely-ish) exploded in the Wayne Enterprises garage.

TVLine spoke with Camrus Johnson about Luke’s brush with murder, his Batwing dreams, the team’s newest addition and the (early) finale coming down the pike.

TVLINE | That was an intense arc you just wrapped up, diving into Luke’s angry, vengeful, punchy side. Do you feel like a weight has been lifted off of him now?
I hope so. I really loved that Luke finally got to show a bit of that anger that he’d been keeping pushed down for so long. After his father died, I’m sure he blamed a lot of that on himself. And then [the alternate Earth’s] Beth died, and he blamed a lot of that on himself. There’s been all this anger, so it was really cool to have a chance to see him release some of that. Obviously we didn’t even see what would happen if he took it all the way, if Kate didn’t talk him off that ledge, but I hope we get to see more of those surprising colors to him moving forward.

TVLINE | Might there be an additional wrinkle to this story, or is the case of his father’s murder now done?
That mini-arc is done, but the overall arc of Luke trying to fill his father’s shoes and become the new Lucius of the Batman enterprise, that will be a huge arc of the entire series. So that’s nowhere near over. And as for his relationship with his dad, we’re going to dive more and more into that — the legacies and the lessons and all the things that Lucius left behind, and who Luke is trying to be.

As far as who killed his dad, we got the answer to who did it and who called the shot, but I feel like there’s an even bigger story behind that, of who told the person to call the shot.

TVLINE | Agent Robles said that Tommy Elliott was after Lucius’ journal, which Luke told Kate was an “instruction manual” for every piece of Wayne tech. Is that the launch of a grand new mystery for the rest of the season?
Mmm-hmm, yep. There’s so much more to the Lucius and Luke story. Lucius had so many other things, secrets that he left behind, so that’s the next piece of connection that we get between Luke and his dad. What is this notebook that he has, and what is Luke’s relationship to it? And how can Luke help uncover this mystery, as his son?

TVLINE | Along those lines, the synopsis for the next episode says that Luke and Julia will help recover “one of the most important items from her cousin’s arsenal.”
Right. What we’ll see is that although Luke doesn’t think that he measures up to his dad, and doesn’t think that he will ever be who his dad is, he’s always working hard to be the next Lucius. And that’s one of the reasons he’s so hard on Kate. He wants her to be the new Batman, and if that’s the case this gives him the chance to be the new Lucius. 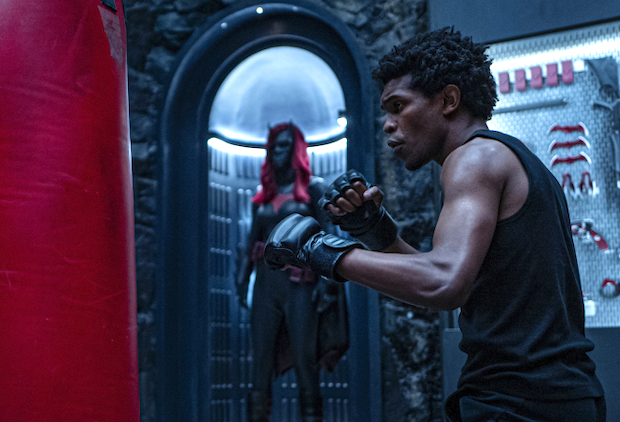 TVLINE | Well, is this “new Lucius” also on his way toward becoming a character in his own right? Perhaps Batwing?
Man, I hope so! [Laughs]

TVLINE | You were working that bag.
I was working it man, that’s for sure. I love that they included that, because as you probably know, Luke was a professional boxer in the comic books. I’ve been wanting to box on the show for a while, and I’ve actually been boxing myself for quite some time. I stopped for a minute, and then I started taking it up again right before the quarantine happened. When I saw Luke boxing on the show, it makes me happy. I was a little out of practice when we shot it, but as soon as the quarantine is lifted I aim to get back in the gym and get my technique back.

TVLINE | The scenes that you and Ruby [Rose] had, in the garage and then back at the office, felt like Luke and Kate’s most adult, serious conversations thus far.
I think so, too. Like I said before, since Luke had been suppressed and sort of keeping his emotions away, he’s always been this rock for Kate. He’s been the person she can vent to, he’s always talked her off the ledge, he’s always given her advice — and this episode we finally get to see it going both ways. They’re here for each other, and we sort of needed that moment. The reason that scene is so adult is because they’re both finally playing both parts of the conversation. 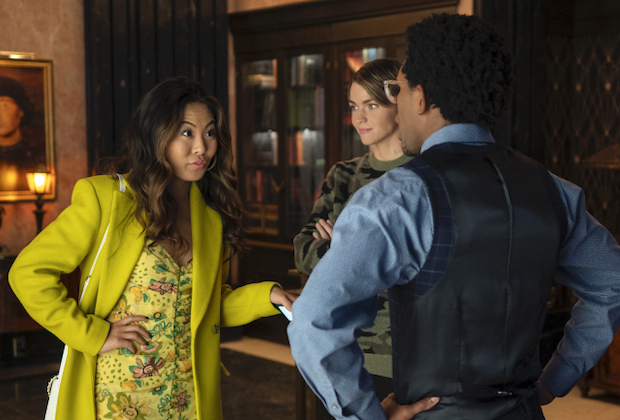 TVLINE | On a much lighter note, Mary (Nicole Kang) is now in the loop. In the next episode, will Luke still be dancing as fast as he can, or has he begrudgingly accepted it?
I think it’s somewhere in the middle. [Laughs] I mean, he really likes Mary, but he also knows that Mary annoys him. So, he’s accepting of her on the team, but he’s also very wary. He doesn’t want another casualty. But he also understands how smart she is, and how willing she is to fight. So he is somewhere in the middle. Maybe she will be good for the team, but at the same time, I’m in charge. I don’t completely trust her with saving the world, but I trust her with maybe helping us save the world. I think it will take some getting used to, some convincing that she has a strong place on the team.

TVLINE | I guess she would be the team medic? And maybe also run their Instagram?
That’s what I’m thinking. [Laughs] No, every team needs a medic, we need a doctor. The other great thing is that Mary is a genius, so she’s another brain on the team. Because although Kate is a smart cookie, she doesn’t have the kind of brain that Luke and Mary have. Whenever we have a blindspot, Mary can be the person that fills it from now on.

TVLINE | Lastly, what kind of ersatz season finale will we be getting? (Batwoman came up two episodes short, after the pandemic shut down production in mid-March.)
Honestly, man, I love this finale. I wouldn’t say I like it more than the finale we had planned, but I will say that when I saw the end of Episode 20, I gasped. [Laughs] It’s really awesome, and I think the fans are going to be pretty happy with what they see. I personally was very impressed that we did what we did at the end of Episode 20. I was very taken back, like, “Wow.” Although I’d love to shoot Episodes 21 and 22 — and I still hope those stories come, because those episodes are freaking fantastic –– I am totally OK, at the current moment, finishing the season with [Episode 20] because I think it’s a pretty incredible cliffhanger.