THE PERFORMANCE | From the very first scene, we knew Wednesday’s episode of Mrs. America would be a rough one for Ullman’s activist, Betty Friedan. And though we didn’t relish watching Betty get overshadowed, dismissed and pushed to the brink of an asthma attack after a very public gaffe, we did delight in the stunning performance that resulted from Betty’s crummy week.

Until now, we hadn’t seen much of Betty’s softer side; the miniseries’ first three episodes framed her as an outspoken, confident feminist who didn’t second-guess herself very much. In fact, one of Ullman’s most captivating moments in “Betty” was her character’s debate with Phyllis Schlafly, in which Betty succinctly steamrolled over many of Phyllis’ anti-ERA arguments. Ullman paced across that debate stage with a casual bravado, imbuing Betty’s words with just the right amount of bewilderment at Phyllis’ incendiary talking points.

But Ullman shone even brighter when Betty said nothing at all. Throughout Episode 4, Ullman’s best acting choices were the ones made silently: the look of disappointment on her face when Betty’s blind date called Gloria Steinem “very pretty”; her fond expression as she reflected on a talk show appearance from years before; the quiet frustration at not being taken seriously by her feminist allies. Then, after Betty humiliated herself by calling Phyllis a “witch” at that debate, she snuck away to the bathroom where Ullman noiselessly communicated her character’s shame and regret.

About halfway through this episode, Margo Martindale’s Bella Abzug calls Betty a “force of nature” — three words that we’d just as soon use to describe the woman who plays her. 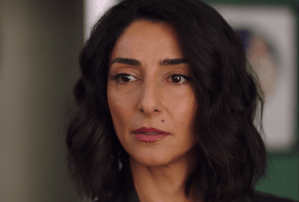 HONORABLE MENTION | Speaking truth to power can sometimes come across as easier done than said when used for a TV storyline. But as NCIS: New Orleans‘ Special Agent Hannah Khoury took on a deplorable bigwig, Necar Zadegan explored every nuance of the precarious process. From intrepidly rifling through years’ worth of evidence to mindfully reaching out to women who, like her, had been marginalized (or worse) by Deputy Director Ezra Van Cleef, Zadegan communicated Hannah’s laser-like focus while also making clear that she knew how big a bear she was poking. But when push came to shove — and Van Cleef shoved back — Hannah dug in her heels and left no doubt that she had the power player dead to rights. Even so, as Van Cleef huffed off, there was something about Zadegan’s composure that signaled, “That was not easy. But I did it.” 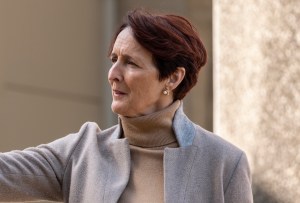 HONORABLE MENTION | As Killing Eve‘s icy MI6 officer Carolyn, Fiona Shaw has been a model of deadpan professionalism for three seasons now. But the death of her son Kenny revealed a tiny gap in Carolyn’s sturdy emotional armor this week, and Shaw responded with her most probing work yet. At first, it was business as usual for Carolyn, fussing over the music at Kenny’s memorial service and brushing off all offers of sympathy. But Shaw let Carolyn’s mounting grief slowly creep across her face, almost imperceptibly, as if Carolyn was fighting back her own feelings… and losing. Finally, Carolyn teared up ever so slightly while alluding to her son’s death as she sat in her car listening to mournful music. Shaw never let a single tear roll down her face — Carolyn would never! — but her eminently restrained take on the mourning process still packed a massive emotional punch. 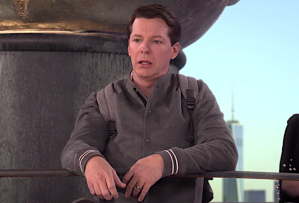 HONORABLE MENTION | Not only did Will & Grace’s finale let Sean Hayes remind us that he can fire off zingers as fast and furiously as a ball launcher, it gave him a last chance to show off his physical-comedy prowess. (A weak-kneed Jack made it through his Broadway debut as a sailor, only for the curtain call to turn him into a puddle of seaman.) But the bit that really spoke to Hayes’ brilliance was a recurring joke in which Jack was reminded of his past — present? — jobs. As his brain sped through his resumé, his portrayer’s face registered confusion (“Wait, am I” still a nurse?), relief (“No”), shock (“Yes!”) and, finally, uncertainty (“Maybe”). It was great shtick, delivered with the precision of a total pro.