Chris Evans’ latest character may not throw around a star-spangled shield, but he’ll try to be a hero all the same.

Evans — best known for his work in those little-seen, indie Marvel movies — headlines the Apple TV+ miniseries Defending Jacob, which dropped its first three episodes on Friday. (Subsequent installments will be released weekly.)

Before you give us your thoughts on Episode 1, let’s break down what happened in the series premiere:

Based on William Landay’s 2012 novel, Defending Jacob stars Evans as Andy Barber, an assistant district attorney in Massachusetts who is leading the investigation into a 14-year-old boy’s recent murder… only to learn that his son, Jacob (Jaeden Martell, with whom Evans co-starred in Knives Out), may have committed the crime.

When we first meet Andy, he and his family have clearly been through the wringer already: He’s getting questioned at a grand jury indictment related to the case, and though he says his family was happy before this turmoil unfolded, it’s clearly taken a toll on Andy to be the subject of news headlines for months.

Then, we flash back to 10 months earlier — and the Barbers do seem happy. Andy blasts AC/DC’s “Back in Black” for Jacob when he won’t get up for school. His wife, Laurie (Downton Abbey’s Michelle Dockery), starts her morning with a run and a history podcast. Jacob does some last-minute studying for a vocabulary test. It’s all very suburban.

But later that morning, Andy is called away from the courthouse to visit a crime scene, where he learns that Ben Rifkin — a classmate of Jacob’s — was stabbed to death. Meanwhile, Jacob’s school goes on lockdown after Ben’s body is found (and, suspiciously, Jacob seems like he wants to admit something to his dad when Andy calls to check in on him, but Jacob thinks better of it and drops the subject). 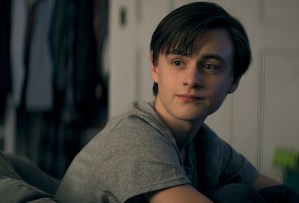 Actually, there’s quite a few red flags surrounding Jacob in this premiere: He doesn’t seem particularly rattled that a boy his age was suddenly killed (he found Ben to be sorta arrogant, in fact); the day after Ben’s death, Jacob’s friend Derek oddly doesn’t acknowledge him on the way into school; and when Andy questions all of the kids at Jacob’s school, looking for usable intel about Ben’s murder, a student named Sarah notably asks Andy, “Have you talked to Jacob about all this?” as though Jacob might know more than he’s letting on.

Aside from his chat with Sarah, though, Andy isn’t initially given any real reason to suspect his son. Rather, he’s more focused on arresting a man named Leonard, a sex offender who moved to town more than a year ago and can potentially be tied to the crime. But at the end of the premiere, Andy receives an email from an anonymous sender, directing him to an Instagram post from one of Jacob’s classmates. The post is a photo of Ben Rifkin, overlaid with “#RIPBen” text — but buried among the many crying-emoji comments is a response from Jacob, who wrote, “Ben is dead. Why are you writing him messages? Acting like his best friends.”

A few students responded to Jacob’s comment, calling him out for his insensitivity. And then there’s a highly concerning reply from Jacob’s buddy Derek (the one who recently ignored Jacob at school): “Jacob, everybody knows you did it. You have a knife. I’ve seen it.”

Shocked, Andy goes up to Jacob’s bedroom — while Jacob is in there, sleeping! — and quietly looks through his things. There’s no knife in Jacob’s desk or the closet… but when Andy opens the drawer of Jacob’s bedside table, he does find a knife, tucked away in a rolled-up sock.

OK, your turn. What did you think of Defending Jacob’s premiere? Will you keep watching? Cast your votes in our polls below, then drop a comment with your full reviews.