Between the custody battle for baby May Ling, Lexie Richardson’s recent abortion and the truth about Mia’s relationship with Pearl, you might have completely forgotten that Little Fires Everywhere has been building toward a massive blaze at the Richardson house.

Fortunately, the Hulu drama revisited that disaster before Wednesday’s finale was over, revealing at last who was responsible for burning down Elena and Bill’s home. But I’m not sure which fire did more catastrophic damage: the literal flames that took down the house, or the explosive fight that threatened to ruin the Richardson family forever.

Read on for the details of “Find a Way”:

THE MCCULLOUGHS | The courtroom fight for May Ling is also resolved in this finale, though the eventual outcome isn’t really what either mother anticipated. During the final day of testimony, Bebe’s lawyer questions Linda about why May Ling’s race and Chinese culture aren’t a bigger part of her upbringing; in a particularly tense moment, the lawyer asks Linda why she changed May Ling’s name to Mirabelle if the baby was allegedly “perfect” when Linda and Mark took her in. Linda gets visibly flustered while on the stand, and though she tries to make a compelling closing argument for herself, the judge dismisses her before she can finish.

Unfortunately for Bebe, Linda’s shaky testimony doesn’t do enough to sway the judge: Linda and Mark win custody of May Ling, and Bebe is completely gutted, sobbing and wailing on Mia’s floor that night. Later, after Bebe has gone home, Mia tries to assure Izzy that Bebe will find a way to recover from this devastation, sharing an anecdote about a prairie fire that she once saw in the desert while pregnant with Pearl.

“Sometimes, you have to scorch everything to start over,” Mia tells Izzy. “Bebe will find a way.” And Bebe does find a way the following night: She takes May Ling back. While Linda and Mark are asleep at home, Linda wakes to the sound of May Ling crying on the baby monitor, and she gets up to check on her — but Mark persuades her not to go, fully confident that May Ling will stop crying if they give her time to settle. And now that they’ve won their custody battle, Mark believes they can stop worrying that someone will try to take May Ling.

Linda acquiesces for a while, but when she can’t get back to sleep, she goes to check on May Ling anyway… and moments later, she storms back in, sobbing to Mark that May Ling has been taken. And she’s right: In the morning, Bebe is in her car, glowing as she looks down at May Ling, who smiles back up at Bebe. 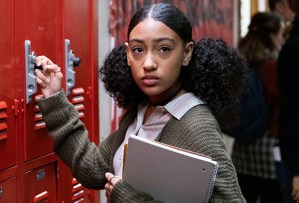 THE WARRENS | Meanwhile, even after Bebe’s custody battle concludes, Mia has a lot on her plate, namely Pearl’s lingering resentment toward her for not telling the truth about their past. At first, Pearl just gives her mom the cold shoulder after hearing the truth from Elena — but later, when Pearl realizes that Mia is doing some kind of art project that mocks the Richardsons and life in Shaker Heights, she blows up at her mom and insists that she give Pearl’s dad a call to tell him what really happened. A nauseous-looking Mia says she can’t do that, but she works up a little courage after Pearl warns that Elena would be happy to do it.

The next day, Mia rings the Ryans, for whom she was carrying Pearl all those years ago. Madeline answers the phone, and when Mia gets too nervous to say a word, Madeline guesses that it’s Mia calling — and Mia immediately hangs up.

As for Pearl, she’s in a pickle of her own. Moody, who is furious to learn that Pearl and Trip have been seeing each other, confronts both of them at the same junkyard where he took Pearl in Episode 1. But before Pearl or Trip can get a word in about the circumstances of their relationship, Moody implies that Pearl is a slut for getting involved with his brother, and a full-blown fistfight breaks out between the Richardson boys.

Also of note: Earlier in the episode, before there was a verdict in the May Ling case, Elena had paid a visit to her friend at Planned Parenthood, hoping to dig up some dirt on whether Bebe Chow had ever tried to abort her pregnancy. When Elena’s friend briefly left the room to see a patient, Elena did some snooping through her friend’s office… and she found a file marked “P. Warren,” leading her to assume that Pearl recently had an abortion, when it was really Lexie.

Later, Elena pays a visit to the rental property, and she drops the bomb on Mia that Pearl had an abortion — that is, until Mia reveals the truth that it was really Lexie’s visit to the clinic, which Lexie probably would have divulged if Elena were a supportive mother. As you might suspect, Elena doesn’t handle that very well, and she promptly kicks Mia and Pearl out of the house; she wants them gone by morning.

That night, when Pearl comes home, Mia finally tells her daughter the whole truth about why she fled from the Ryans, admitting that she helped Bebe because she wanted to prove she did the right thing by keeping Pearl in the first place. As Mia tearfully grapples with her decision, Pearl assures her that she would always have chosen Mia as her mom, if given the choice… and after they’ve finished reconciling, Mia reveals that they need to pack their things and leave Shaker Heights. (Pearl doesn’t seem all that surprised by this news, and she doesn’t even want to say goodbye to Trip, insisting that she’d rather just remember Shaker Heights as the idyllic home it used to be a few months ago.)

The women make quick work of packing up the rental property, and they leave the key in the Richardsons’ mailbox on their way out of town. And though Mia assumes that Pearl will want to hit New York next and meet the Ryans, Pearl has another destination in mind, which we later learn is Mia’s parents’ house. And when they finally arrive at the Wright residence after another long road trip, Pearl asks her mom to read a poem she wrote during the drive. Mia agrees, realizing as she reads it that the poem is about Shaker Heights, Mia’s relationship with Pearl and their unconventional life together.

“If we can finally see the lies and the town and the cage we’re inside of, we can see so many other things, too,” Mia reads in voiceover. “We can see the door — a way out. And we can fly away.” And with that, Mia closes Pearl’s notebook, wipes her tears and goes to join Pearl inside her parents’ home. 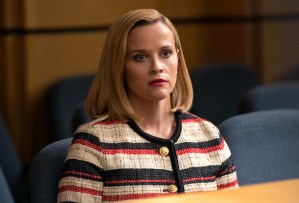 THE RICHARDSONS | Things do not, however, end so optimistically for the Richardson clan. Though Elena clearly feels vindicated by the McCulloughs getting custody of May Ling, it’s what happens after the hearing that really messes up the family.

In fact, in the span of one evening, the following secrets come out: Moody informs Izzy that Pearl had an abortion, which leads Izzy to realize it was Lexie who was actually pregnant — and later, Lexie comes clean to Elena about both the abortion and the Yale essay topic that she stole from Pearl. Meanwhile, Izzy reveals that she and her friend April were dating for a full year, and Bill finally tells Elena that he knows she had dinner with her ex in New York. (That last revelation tees up a major fight between Elena and Bill about the sacrifices they’ve made for their family, prompting Bill to go for a drive to clear his head. “Maybe it’s about time I got myself a pacifier, too,” Bill says on his way out, suddenly making himself interesting in the last few minutes of the show.)

On their own, perhaps these unearthed family secrets wouldn’t be so bad. But when Izzy realizes that Mia and Pearl have suddenly left town — thanks to Elena — she’s inconsolable. She grabs a can of gasoline from the garage, douses her bedroom curtains with it… but before she can strike a match, Lexie interrupts her plan, calling the rest of the family into Izzy’s room. Elena is livid when she realizes what Izzy intended to do; Izzy is equally enraged that her mom forced Mia and Pearl to leave town, which ticks off Trip and Moody, too. But when Elena yells that she never wanted Izzy in the first place, horrifying her three other children, Izzy has had enough: She grabs her backpack and leaves the house — seemingly for good — despite Moody’s tearful protests for her to stay.

Then, after Izzy has taken off, Lexie reveals all of her recent mistakes in an emotional confession to Elena, begging her mom to understand that “I’m not f—king perfect.” But Elena won’t have it. “YES, YOU ARE!” Elena literally screams at Lexie before closing herself in her bedroom… and now Lexie has had enough.

Furious that her mom won’t let her have flaws, Lexie begins pouring the gasoline around Izzy’s room, and she won’t let her brothers stop her. “Maybe Izzy’s the only one who actually had it right,” Lexie tells Moody and Trip, reminding them how Elena has destroyed everyone around her. And though they seem alarmed by Lexie’s rage at first, Moody and Trip quickly get on the same page: The three siblings communicate with each other silently, giving one another a firm nod, and then they each set a small fire (sorry, a little fire) in their own bedrooms. There’s not even much time to take in what they’ve just done; as the house quickly goes up in flames, the siblings get Elena out of her bedroom, and all four of them head outside as fast as they can. (Bill, for his part, gets home from his drive just in time to see the blaze at its peak.)

And now, we’re back where it all started, with Elena sadly staring at her charred home. But this time, when the authorities question Elena about who might have started the fire, we hear Elena’s response. “I did it,” she says, sharing a knowing look with Bill (who doesn’t seem too rattled that Elena is taking the fall).

Later that morning, Elena goes searching for Izzy, who seems to be on a bus headed out of Ohio. But Elena first goes to the rental property to look for her daughter, and instead, she finds the house is empty, save for Mia’s very last art project: a miniature replica of Shaker Heights, covered in white flour. As we hear the voiceover of Mia reading Pearl’s newest poem, Elena weeps as she walks around the property, taking a long look at Mia’s display. In the center of the project, there’s a tiny golden birdcage, which contains the lone feather of a cardinal that Izzy had tried to nurse back to health when she was a child. Elena takes the feather and looks at it somberly, then whispers to herself, “Izzy.”

OK, your turn. What did you think of Little Fires Everywhere’s finale? Book fans: Did you enjoy Hulu’s adaptation overall? Grade the episode in our poll below, then drop a comment with your full reviews.