CBS’ SEAL Team, with three new episodes left to air in Season 3, has put much of Bravo Team in flux, juggling difficult decisions both professional and personal.

Sonny Quinn, for one, was detoured away from the latest deployment to J-BAD (as punishment for a midseason bar brawl) and instead assigned to his home state of Texas. There, he has been forced to revisit his prickly relationship with his father Emmet (played by John Savage), as well as his cut-short connection with childhood friend Hannah (Rachel Boston).

Might this begrudging homecoming actually wind up benefiting Sonny? And will be rejoin Bravo in battle before the season reaches its slightly early end? TVLine spoke with AJ Buckley ahead of this Wednesday’s episode, airing 9/8c on CBS. 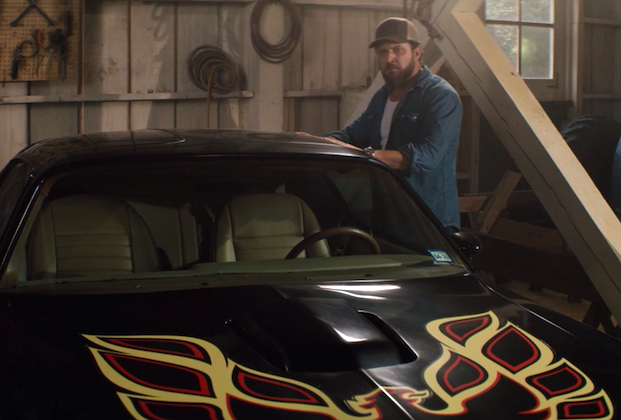 TVLINE | How might things change for Sonny and his dad now that he’s seen that Emmet actually has been taking care of that sweet ride in the barn?
How cool is that car? When I showed up on set, Spencer [Hudnut], our showrunner, was like, “I’m not going to tell you the details of what the car is, but I got you the sickest ride.” So whatever the reaction is [on-screen] was me actually seeing the car for the first time. Meanwhile, the crew and everybody were like, “Dude, that car!” It reminded me of the Trans Am Burt Reynolds drove in Smokey and the Bandit.

As far as Dad goes, I was really excited that we got John Savage. He’s such a talented, old-school character actor, and I’ve been a fan of his for a while, so it’s been great, man. And any time you get an opportunity to go deeper and peel back the layers of the character whose shoes you have been wearing for so long is really exciting, as an actor. Spencer told me that this would be happening in the later part of the season, that we sort of see what’s behind Sonny and why he is the way that he is. All while there’s so much change going on for everybody.

TVLINE | I was talking about that with Max [Thieriot]. Every Bravo member has balls up in the air.
Yeah. Change is good for everybody, but it’s just how you deal with that, and I think Sonny is not one to like change. He very much likes his routine and likes to be with his brothers, and now he’s sort of been ripped away from them. He’s forced to look at who he is, and he can potentially see a lot of himself in his dad for the first time. He’s like, “I could potentially end up alone,” and I think that scares him. He realizes he’s got to do some work within, and that’s where the Hannah character really comes into place. She’s played by Rachel Boston, who’s so awesome to work with, and she is what really brings out this vulnerable side of Sonny that we haven’t really seen before. 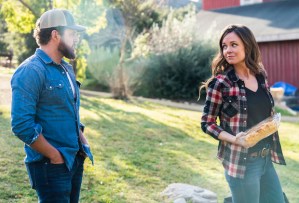 TVLINE | I was going to ask: When all is said and done, what role does Hannah play in this arc for Sonny?
She plays a big role. This is a really cool arc for her — and potentially down the road, too. There are some really cool dynamics there with her. She plays such an honest, strong Texas woman, and there’s a real history of them of being high school sweethearts. In a sense, I think Sonny’s always thought that she was “the one that got away,” so when they see each other for that first time, the connection was instant. They both sort of found each other at the right time in their lives again, and they plant a lot of seed, so to speak, for this to turn into a much bigger thing.

TVLINE | Are we going to touch on whatever the inciting incident was in the past that caused Sonny’s “disappearing act” from Texas?
I think they go into that, and a lot of it — not to give anything away — has to do with Sonny coming from, like, a broken home. There wasn’t much stability with his family, so I think he just sort of had that moment of, “I’m 18 and I’m going to go out on my own. Screw everybody else.” He’s the type of guy that never looked back, and he comes to realize that you should never do that.

You’ve got to be able to plant your roots somewhere, you’ve got to have somewhere that you call home that has stability, and I think enough time has passed where he realizes this is where his heart is and has always been, and we’re sort of now seeing the next chapter of his life. He still wants to serve his country and be on the team, but for the first time he’s able to look a little further past that, 5, 10 years from now, to where he could end up. I don’t think he’s ever had those thoughts before. 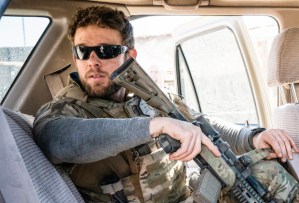 TVLINE | Meanwhile, can you tease what’s going on with Clay this week over at COP (Combat Outpost) Redding? He’s going through his own sort of “punishment,” for choosing STA-21.
Actually, it’s a really great episode for him. What’s cool is that the writers knocked it out of the park this season in that there’s a real ensemble piece going on with Ray and his family, with Jason and his decisions, and with Clay heading off to the next adventure per se. During that time, we’re put in places where we have to step outside ourselves and look at the surroundings and see why people in certain roles in their lives make the decisions that they do. Clay is having that experience, where some incidents happen [at COP] that make him understand who he is but also who Jason is as a leader, and why Jason makes the decisions he does. And for Sonny, it’s the same thing. Whether he likes it or not, the decisions that his dad made, he now most examine this time in his life and the situation that he’s in, and that’s going to redefine who he is in the years to come. 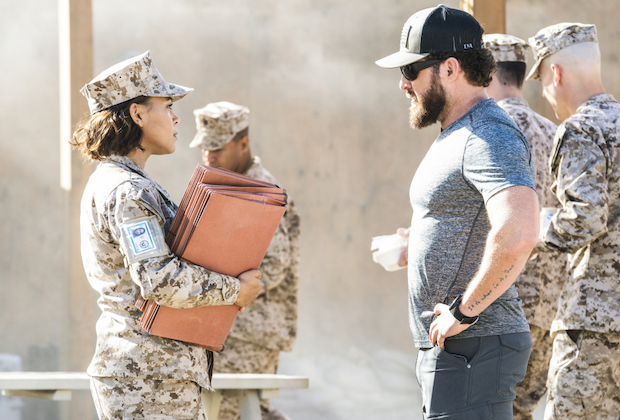 TVLINE | Of course I have readers emailing me, asking if things are 100-percent done between Sonny and Davis. What do you want to say to those people?
There’s going to be some tension. And there’s going to be a little triangle. There’s always the “Savis” love, as they call it. I love that they call it Savis, I crack up every time that I hear that. The question is, does time away make the heart grow fonder? Or does it allow people to grow and heal and find new love?

TVLINE | SEAL Team will air 20 episodes out of 22 this season. Will Sonny rejoin the fight by the end of the season (airing May 6)?
You will see Sonny, in his knuckle-dragger ways, kicking some doors down, for sure.

TVLINE | But back in J-BAD, not in some honky-tonk?
He will be back to his door-kicking ways with Bravo at some point, for sure.

TVLINE | It also looks like the Ambassador Marsden issue might not be over. That mission and her tragic death keeps turning up like a bad penny.
Yeah, there’s a lot of stuff we’ll run into. The home stretch gets really exciting.

What’s been cool, too, and the one thing I’m really proud of, is how our show hires more veterans than any other show. [EP/director] Chris Chulack and [showrunner] Spencer [Hudnut] have gone out of their way to do that. What’s also great is that a few people who are in Special Operations are in the writer’s room now, on staff, so a lot of the storylines and stuff are not on-the-nose experiences, but real-life things these guys have been through.

Also, we’ve had incidents where guys who were day-playing as stunts or whatever were talking to some of our team guys, and they would find out they were in the same battle together. In one of the coolest moments on set, two guys realized that they were at the same battle but had never met, they’d only talked to each other over radio. They were in a really hairy situation, but the team that one of the guys was on was saved by the other guy’s, and they never got the chance to say thank you. Once they did, they both got emotional, as they realized on our set that they met [over comms] and fought side by side. That’s why I love our job and our show so much, because we’re surrounded by these great men and women who have given up so much, and our show gets to tell those stories and be truthful to these people that we’re on set with every day. Everybody, all our producers and writers, have really kept their promise to make the show as authentic as humanly possible.

TVLINE | Last question, and on a much lighter note: Sonny’s always sucking down bottled beers. What’s really in there?
[Laughs] Usually, they do like, I don’t know whether it’s near beer or something…. But we’ll joke around, we’ll put something that tastes terrible in somebody’s drink and hand it to them in the scene. Usually, it’s Max [Thieriot] who does it. That guy is the No. 1 prankster, and I am always his target because I like to take naps, because I have three kids, and he always finds a way, when I’m sleeping, to not only prank me on something but record it and then post it on Instagram!