Lalo Salamanca is a force to be reckoned with… but then again, so is Kim Wexler.

Better Call Saul ratcheted up the tension to new heights last week as Jimmy and Kim got an unannounced visit from Lalo, who was convinced Jimmy was lying to him… and who had a gun not-so-subtly sticking out of his waistband. Lalo has been a revelation this season — a terrifying villain who always seems to be having the time of his life — and he’s as clever and resourceful as he is bloodthirsty, too. “He’s the smart one of the Salamancas, it seems,” Tony Dalton, who plays Lalo on the AMC drama, tells TVLine with a laugh. “Which doesn’t say much, but at least it’s something.” 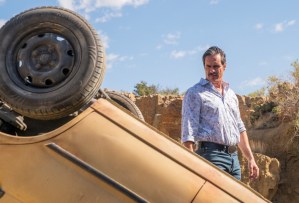 Dalton thinks Lalo’s devil-may-care approach to life stems from the high mortality rate for drug cartel kingpins like himself. “Most of these people know they’re going to die… Maybe this guy just doesn’t care because he knows he’s going to die. So I kind of approached it a little bit with that ease.” Lalo also demonstrated a shocking ease when he leapt a dozen feet down into a desert ravine — “That was a stuntman. I wanted to do that, but they said no” — and Dalton enjoys that almost supernatural aspect of his character: “I saw somebody comment that they like the character of Lalo because, besides everything else, he’s also one-eighth a superhero. There’ll be a little tiny thing [he does] where you’re like, ‘What the f–k?'”

Heading into that showdown with Jimmy and Kim, Lalo was planning to kill them both, Dalton believes: “I think that’s exactly what he was going to do. I think he couldn’t care less… He was like, ‘Look, before I go to Mexico, I’m going to go kill this guy because he lied to me.’ And then she showed up. ‘Oh, I’ll kill her.'” But before Lalo could strike, Kim stood up to him with an exceedingly well-reasoned legal argument that knocked him off his game. “Basically, Kim saves the day, you know? She steps up, and Lalo, at the same time as being offended, he kind of respects her a little bit. There’s this sort of, ‘Is she really talking to me like this? Does she know I have a gun right here?'” In the end, though, her argument convinced him to change his mind, Dalton notes, “[and he decided] to just spare his life and go home. I think in Lalo’s mind, it’s like, ‘Alright, alright, this was entertaining. Let’s go.'”

So with that immediate danger out of the way for Jimmy and Kim, what does Monday’s season finale (AMC, 9/8c) have in store for Lalo? “Lots of fun stuff!” Dalton exclaims — while adding that he can’t reveal too much, of course. “Pure, one hundred percent unadulterated entertainment. That’s what’s in store.”

Better Call Saul fans, drop your predictions for Monday’s finale in a comment below.