Better Call Saul wrapped up its penultimate season with a new scam in the making… and one key character in very deep trouble.

Jimmy and Kim are still reeling from their close encounter with Lalo last week; they watch him drive off, and Jimmy runs to the phone where Mike was listening. (“I heard enough to know she saved your ass,” Mike grumbles.) When Kim asks who that is on the phone, Jimmy spills the whole truth to her about what happened out there in the desert. But she doesn’t judge him, and they check into a swanky hotel for their protection. As she’s washing up, he works up the courage to ask her: “Am I bad for you?” She reassures him he’s not; he did “cross the line,” she allows, but she trusts he won’t do it again. He’s still worried, though.

The next morning, Kim is up and ready to go to court, but Jimmy wants her to take the day off and hang out with him: “Let’s John and Yoko this sucker.” Really, he’s concerned about her safety, but she thinks she’ll be fine and promises to keep an eye out. At work, she asks the public defender for more pro bono work, and he happily shows her to the file room where stacks of felonies await. Meanwhile, Jimmy charges over to Mike’s house and pounds on his door, demanding to know what’s going on. Mike softens when Jimmy admits he’s scared for Kim, and he lets him know that Lalo will be taken care of — tonight. 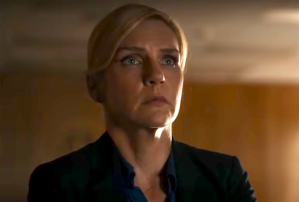 Kim also runs into Howard in the courthouse elevator, and when she tells him she left Schweikart & Cokely, he pulls her aside to express his concern for her — and to tattle on Jimmy for the bowling ball and hookers-at-lunch incidents. He expects Kim to be mortified, but instead, she laughs in his face: “That’s it?” Howard thinks Jimmy’s recklessness is rubbing off on Kim, but she stops him right there: “I make my own decisions. For my own reasons.” She insists she knows Jimmy… but Howard says the one who really knew Jimmy was Chuck.

When she gets back to the hotel room, Jimmy tells her Lalo is no longer a problem and they’re safe, and Kim breathes a huge sigh of relief. Jimmy is still worried and encourages her to go home, but she wants to stay and order room service — and come up with ways to keep torturing Howard. They giggle as they consider shaving his head… but Kim wonders: What if they framed him for something unethical, and Davis & Main would have to settle the Sandpiper lawsuit? Then Jimmy would get 20 percent of the common fund… or about $2 million, they calculate.

They treat themselves to an assortment of ice creams from room service and dream of what they’d do with the money. (Kim would open a pro bono firm; Jimmy just wants to buy a house.) But Jimmy doesn’t think they should go through with it. Howard would have to have done “something unforgivable” — episode title alert! — and his life would be ruined. Kim calls it just “a career setback for one lawyer,” though, which is nothing compared to the good they can do with the money. Jimmy gets blunt with her: “It’s not you. You would not be OK with it.” But she slyly replies, “Wouldn’t I?” And as she slips away to take a shower, he can only smile with admiration. Looks like she’s Mrs. Saul Goodman after all. 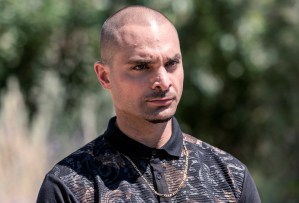 NACHO IS BURNT | Meanwhile, down in Mexico, Lalo brings Nacho down to his lavish compound, where he’s greeted warmly by his staff, including a kindly old chef who gives Lalo a maternal hug. (Gus is happy to leave Nacho down there as “a man on the inside” while he sends in a squad of gunmen to kill Lalo.) Lalo prepares Nacho to meet with Don Eladio and, if it goes well, to get “a bump up,” but Nacho receives a call from an unknown number. A voice tells him to get up at 3 am and unlock the back gate at Lalo’s compound; when he tries to ask questions, the unidentified caller hangs up.

Nacho’s meeting with Don Eladio goes well — Lalo presents the don with a shiny red sports car (“Magnum P.I.!”) with a box full of cash in it — but that night, Nacho sneaks outside intending to unlock the gate. He’s spotted, though, by Lalo, who just thinks he’s a fellow “night owl” and offers him a drink. Nacho thinks quickly and starts a grease fire in the kitchen to divert Lalo’s attention; when Lalo runs inside, Nacho unlocks the gate and lets the masked gunmen inside. Lalo’s not an easy one to kill, though: He uses a bodyguard as a human shield and spatters scalding hot grease in one gunman’s face to escape, scurrying into a secret hatch and through a long underground tunnel to get outside to freedom.

All they did was make him mad: Lalo gets his hands on one of their machine guns and, seeing a few of them crawling into his secret tunnel, fires a hail of bullets into it to snuff them out. Finally, he stalks the last living gunman — the one with the fried face — who insists he doesn’t know who hired them. “That’s OK,” Lalo tells him. “I do.” He has the guy call his boss and tell him the job is done, and he walks away with a newfound vigor, gazing upon the dead body of his beloved chef. Yeah, we’re not feeling so great about Nacho’s chances of surviving the final season, are you?

Alright, Saul fans, it’s your turn: Grade the finale, and Season 5 as a whole, in our polls, and then hit the comments to share your post-finale thoughts.