Whoa… Homeland definitely knows how to set up a finale, doesn’t it? Sunday’s penultimate episode put Carrie in an impossible position: either allow an unjust war to break out between the U.S. and Pakistan, potentially killing millions… or murder her mentor and close friend Saul Berenson. 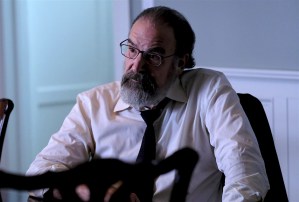 But first, a quick recap of what led up to that huge shocker of an ending: While Carrie stands accused of being an accessory to President Warner’s murder, she catches wind of last week’s suicide bombing that injured Jenna Bragg. She presses Saul about Yevgeny’s claim that he has a spy high up in the Russian government, and he denies it — but we see in flashback that he actually does. (Hey, that’s Ben Savage playing a young Saul!) With Jenna’s help, Carrie discovers the spy is a woman who currently serves as a translator for the director of Russia’s intelligence agency; she and Saul used a highly intricate form of communication where they would hide tiny notes to each other inside the spines of old books.

But Carrie still needs to know the spy’s name, or Yevgeny won’t hand over the flight recorder. She is led to a lavish but vacant home by a Russian liaison, who sets up a video call between her and Yevgeny. (Man, everyone is on Zoom these days.) Carrie tells him he was right about Saul’s Russian spy, and she knows how they communicate. He tells her the flight recorder is in Moscow, and he demands the spy’s name in exchange, which she still doesn’t have. She throws up her hands, saying there’s nothing more she can do, and pushes him to “do the honorable thing” and hand over the flight recorder, but he insists it’s out of his hands.

Yevgeny says there is one more thing she could do, though: “You can still take Saul out of [the] picture.” Huh? If Saul is dead, he explains, his assets would pass on to someone he trusts — namely, Carrie. So then they’d be able to “neutralize” her. Carrie fumes: “You f—king knew it would come to this.” But Yevgeny puts it as plainly as he can: “I hoped you’d find another way, but like you said, you’ve tried everything. What’s left?… Kill Saul.” And yep, that famous chin of Carrie’s is definitely quivering as she walks out.

Got thoughts on tonight’s penultimate Homeland? Predictions for the series finale? Drop ’em in a comment below.