A tween accomplice, a murder for hire and a nail salon robbery! Sunday’s episode of Good Girls certainly had something for everyone. The jam-packed hour clearly set the stage for the season’s latter half, including more from the fashionably-challenged new agent in town who’s keen on sniffing out our heroines (antiheroes?). Let’s see what’s got the ladies hustling this week, shall we?

Thanks to a police connection, Agent Donnegan has the women’s specific nail polish color recalled. She figures whoever is counterfeiting the cash will eventually run out of supply, and a desperate criminal might be easier to catch. In the very next scene, the ladies mourn the loss of their “butt-ass ugly color” (coined by Annie, of course), but Beth doesn’t flinch. The women have enough money to hire Max’s cousin, so it’s time for Plan B: order the hit on Rio. After that, their problems should disappear, right? (Fat chance. I’m guessing the women meet Agent Donnegan veeery soon.)

Back at Hill House, Stan is disappointed that Ruby won’t keep the ring he bought her. The push-and-pull dynamic between the two is building up, and eventually, it’s bound to explode. Ruby wants to make sure someone in their family is “good,” but Stan’s annoyed that Ruby won’t accept his lucrative (albeit, illegal) side-gig.

The women meet Max’s cousin at a diner, but the guy is a double-amputee. Specifically, he doesn’t have arms, which seem like necessary appendages for murder, right? He tells them he specializes in car bombs, but since Rio is hard to get close to, they need a sniper and he’s got a guy. Cousin doesn’t know how to contact this mystery man, but says the guy will find them. Okay. 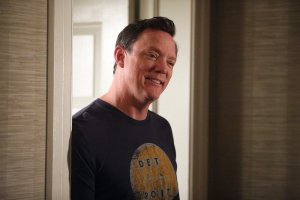 With their shade still MIA (it’s Creamsicle Sunset, for the record), the ladies test out other colors to find the closest fit. They hope their new blend will be passable, but when Beth delivers the goods, Rio picks up on it right away. After telling her to change it back, he says he doesn’t know how to incentivize her anymore. He offers her a gun and tells her to just finish him off. He forces her to pick it up, but she places it on the table and slides it back to him. Always one step ahead, he tells her it was the weapon he used to kill Lucy, and now, he’s got a damning new piece of evidence to hold over her head.

“Why did I touch it?” Beth asks Ruby and Annie. “I’m, like, so used to that man just handing me guns that I don’t even think about it!” Annie suggests they steal some more product from the nearby salon, but Beth says they can’t because the woman there saw their faces. “She didn’t see mine,” Ruby offers.

Through a church program, Ruby takes women from a local shelter to the salon to get dolled up. She uses her daughter as an accomplice to finagle a set of keys from an employee and make the grab. After the job is done, Sara demands to know what Ruby stole, calling her a hypocrite. Ruby then drops a truth-bomb on the sour Sara. “What, you thought kidneys grow on trees?” Ruby asks. “I made a choice, OK? To do something I thought I would never do. It wasn’t for fun or to have nice things. I bought you a second chance. I stole it. And I will be damned if I threw my soul away so you could turn out like this.” (Get her, Rube!)

Cousin’s guy texts her and wants to meet face to face before accepting the job. Turns out the job will cost $60,000, double what she was expecting. But it’s OK, he says. He’ll invoice her. (Who knew you could put murder on layaway?)

Dean tells Beth he quit his job and fesses up to kissing his boss. Beth pours a drink while processing the news. He says his boss tried to undo his pants, but he stopped her. Why, she asks. “Because I don’t want her. I want you. But I don’t really have the best track record, so I don’t expect you to believe me,” he says. “Beth, I really want to stay.” She believes him and tells him not to go.

In the closing moments, Beth delivers the latest drop-off to Rio, who asks her how she’s feeling. “Incentivized,” she responds with a devious smile.

Will the hit go down as planned? Could this show survive without Rio and Beth’s steamy chemistry? Hit up the comments and let us know your thoughts!