In the vein of classic TV love stories like Temptation Island, Love Island and that episode of Friends where Phoebe and Charlie Sheen get chickenpox and aren’t allowed to touch each other… comes Too Hot to Handle, a new reality competition featuring some of the hottest, dumbest people you will ever grow to care about.

The eight-episode first season, which hit Netflix on Friday, sends 10 international hotties to a “Retreat” in a remote location (psst… it’s Mexico!), where they think they’re about to spend the naughtiest summer of their lives. (They’re not!) But before we dive into the big twist, let’s take a minute to familiarize ourselves with the sides of beef at this non-buffet:

Ninety percent of the show’s best one-liners come courtesy of 19-year-old Chloe Veitch, a well-meaning lass from Essex who admittedly describes herself as “not the brightest spark… in the book.” (In her defense, books have words.) On the other end of the intellectual spectrum, we have tattooed New Jersey native Sharron Townsend, 25, who allegedly participated in Women and Gender Studies in college. He’s also an artist… and by that, I mean he says he takes pictures of his ding-dong next to air freshener cans for comparison.

Moving on, we’ve got London-based Kelechi “Kelz” Dyke, 27, who calls himself the “King of the Jungle” because The Lion King was always his favorite movie. (I just watched a lot of Dumbo growing up, so I don’t even want to know what my nickname would be.) He’s joined by Georgia peach Rhonda Paul, 27, and Matthew Smith, 29, a Colorado native who bears a striking resemblance to Jesus… until he opens his mouth and says things like, “Sexually, I’m a lot to handle.”

There’s also something bizarrely endearing about Harry Jowsey, 21, who takes every opportunity to remind us he’s Australian by yelling things like “Crikey!” at random. With the looks of a One Direction reject and the personality of a “cheeky cockatoo,” he’s definitely one to watch. (Spoiler alert: At one point in the competition, he becomes so desperate that he starts looking at fish… differently.) Also a hoot is Francesca Farago, 25, a Vancouver-based Instagram model who thinks her personality is her best asset, “but the eyes go to the boobs. But, like, my face isn’t too bad, I don’t think.” She’s a poet, really.

Other players include Nicole O’Brien, 23, a Catholic school escapee from Ireland; Haley Cureton, 20, a sexually fluid sorority girl from Florida who doesn’t even know what language her back tattoo is written in; and David Birtwistle, 28, a London-based fitness nut who fancies himself a quintessential British gentleman, the kind of person his mother would be proud of. (“But at the end of the day, hashtag David loves a sex party!” Charming.) 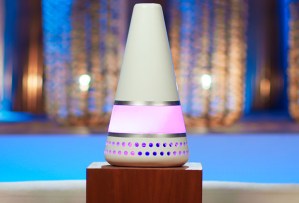 At this point, the players remain unaware of the show’s true purpose — to see which of them can successfully build meaningful relationships without making any sexual contact whatsoever. This becomes clear when [1] the guys celebrate finding a literal bucket full of condoms in their room, and [2] everyone gets so bored that they take turns kissing while blindfolded and try to guess whose lips they are. If this was any other trashy reality dating show, these shenanigans could continue without consequences. But as the contestants are about to discover, it is not.

The premiere ends with the group assembling for its first official sit-down with the show’s host, an Alexa-esque piece of equipment named Lana. As the cone-shaped overseer explains, “You are all aesthetically pleasing to the artificial eye,” to which everyone nods in agreement. That’s when she drops the rules of the game like a bombshell: For every sexual act — including kissing, heavy petting, full-on sex, or even self-gratification — money will be deducted from the group’s final winnings. Cue the meltdowns.

Your thoughts on Netflix’s latest reality TV sexperiment? Grade the premiere below, then drop a comment: Will you binge the rest of the season, or are you checking out of the Retreat?