Warning: The following contains spoilers for Thursday’s penultimate Will & Grace. If you’d rather watch now, read later, make yourself as scarce as Karen at an AA meeting.

As the Will & Grace revival neared its conclusion Thursday, at least three out of four of our main characters contemplated moving on up… as in, to upstate New York. And by the end of the series’ penultimate episode, two of them were as good as packed. Which two? As if you can’t guess, read on… 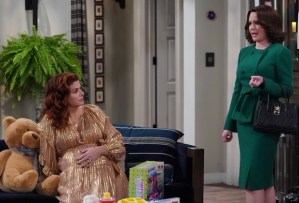 ‘SILENCE! YOUR SOCIAL BETTERS ARE HERE’ | As “New Crib” began, Will and Grace eagerly abandoned their plan to write thank-you notes for the shower gifts they’d received weeks ago in favor of accompanying Jack and Karen to Blattsville, NY, where a statue of our favorite tippler was being unveiled to celebrate her baseball team’s championship win. Once there, Grace was immediately taken with the town. How could she not be? It had a nail salon/Thai restaurant/post office combo — she could run her whole life from one chair! While she and Will set off to check out an open house, if only to get the mom-to-be a free brownie and a potty break, Karen wondered whether Stan had arrived yet the same way a teenage girl might wonder if the boy she likes was thinking about her. Nearby, Jack discovered that his tongue-scraper ad had made him not just a celebrity but an icon. In Blattsville, where his picture hung on the doctor’s-office wall, but still. He couldn’t wait to accept the City Council’s invitation to add his handprints next to Jim Belushi’s on the Walk of Fame. 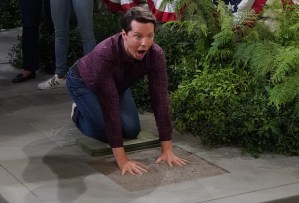 As Jack got down on all fours to make his impression, he marveled, “I have never felt so comfortable in this position.” Which gave him an idea: Should he and Estefan move to Blattsville? If they did, “I could wear big glasses and park illegally.” On the other hand, no, he was too big for that podunk little town. “I refuse to be stuck!” he cried. And, of course, at that point, he’d debated the matter so long that he was stuck — in the cement. Meanwhile, Will and Grace met realtor Ru (aw — Yvette Nicole Brown), who sensibly inquired whether they were there “to see the house, or are you brownie-and-pee people?” Rather than whizz in and out, Will and Grace turned their tour of the home into an improv game in which the last letter of whatever he said had to be the first letter of her reply. By the hardest, she managed to keep up till he used the word chapeau, and she didn’t know how to spell it. She did like the house, though. Noting how spacious it was, she remarked, “I’d love my Instagram to have a kid and a dog.” 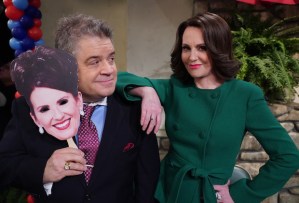 ‘THIS WOULD BE A GREAT PLACE TO RAISE YOUR FAMILY’ | After Danley introduced Karen while wearing a baby getup — as part of the bet that he lost with his crush — she covered for the fact that her “statue” turned out to be the size of a vibrator by surprising the townsfolk with a name change: Blattsville would henceforth be known as Karen Walkerland. In other words, she said, “now you all live in me.” Throughout Karen’s attempt to save face, Will and Grace were distracted by a text that she received from Ru about her offer on the house. Was Grace going to tell him she was moving to Blattsville, he asked, or “was I just supposed to figure it out when I stopped finding Cheez-It powder on the couch?” At the very least, he thought they’d have talked about her relocating a 40-minute train ride away. Now he was… at a loss. Throughout Jenny’s pregnancy, he’d always been able to tell himself everything would be OK because he and Grace were going to be together. (Don’t worry; they turned it around quickly.)

Post-ceremony, Karen was my-buzz-is-wearing-off bummed that Stan had been a no-show. “I really just wanted him to be proud of me,” she told Jack, “but I’m not even on his radar.” When Danley approached, Karen hid behind a mask of her own face and eavesdropped on his and Jack’s conversation — a revealing chat during which Danley disclosed that Stan hadn’t come because he was a total wreck. He loved and missed Karen so much, in fact, that he was down to four meals and two snacks a day! Needless to say, Karen was elated to hear that she still had a hold on her former husband’s heart. Back at the open house, Grace was withdrawing her offer when in burst Will — he’d changed his mind. And before you could say “Happy endings all around!” the besties had decided to put in an offer on the home together. If people talked, so what? They’d just say what they always did, Will imagined. No, not “Do you think they’ve had sex?” — the other thing: “It’s odd, but it works.” Would it still when one of them met somebody? “We’ll figure it out,” he promised, “then I’ll move in with him.” How could he be so sure he’d be the one to meet someone? “I’m a 9” in upstate New York, Grace said. “People don’t even think I’m pregnant.”

Considering the way the episode ended with Will picturing his little girl reading by the fireplace, Grace’s ginger-haired son beside her, we can safely assume that they’re going to live happily ever after, right? And Karen’s going to reunite with Stan? And Jack and Estefan will stay in Manhattan? (Somebody’s gotta run Coco’s!) Hit the comments.