Leave the country and never return, or turn herself over to the CIA for years of questioning and detainment: Lily’s current options on Devs aren’t looking too hot, if you ask us. While she thought she could beat Forest and Katie at their own game by refusing to step foot on Amaya territory, that went right out the window once Homeless Pete was revealed as another operative for the Russians. Will Lily be able to take down Devs and reclaim her life? The series finale (now streaming on Hulu) explains it all… sort of.

Score one point for Camp Determinism, because Lily does show up to Devs, and Forest is expecting her. “I don’t know what I am anymore,” she says. “Something that makes no decisions, has no choices, follows a path we can’t see. I’m not even choosing the words I speak now.” Lily’s adamant that the Devs creator has taken everything from her, but Forest denies it. “I can’t take what you never had. The sense that you were participating in life was only ever an illusion,” he says. And that’s the scary part about determinism. Per the philosophy, human beings have no free will; we’re just tumbling and fumbling toward pre-planned fates.

He also tells Lily that the name of the project is not Devs; the “v” is Roman, so it’s actually a “u.” Hence, it’s literally called “Deus,” the Latin word for “God.” They have, in a sense, created God from a machine.

Lily tells him that tech-company owners become fanatics, thinking they’re messiahs. Forest laughs it off, then says, “This is the moment you take the gun out.” It’s pretty tough to one-up your nemesis when he literally knows the future. 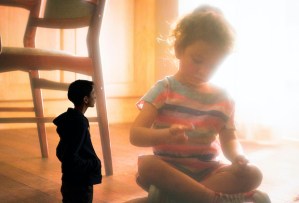 Despite his messianic foresight, Forest doesn’t try to stop Lily; rather, he shows her something. On the screen, they watch it all unfold. Lily holds Forest at gunpoint and demands that Katie open the cube. She forces Forest inside, and their future selves make the strange, hover-trip toward Devs’ exit. “You know what happens to messiahs, don’t you?” she asks. “They get resurrected.” She shoots him dead before the cube can reach the end. With the system’s vacuum seal broken, the cube crashes to the ground below. Lily crawls out, but ultimately, they both die. Snapping back to the present, she asks him if it can be stopped. The answer’s a big fat “no.” Strangely enough, Devs can’t see beyond that moment in time, either.

Like puppets on a string, they begin their pre-determined script, but instead, Lily throws a curveball. She tosses the gun out of the cube as the doors close. Forest and Katie are shook. “That’s not possible!” he exclaims with wide eyes. “You know the thing about messiahs, don’t you?” she responds. “They’re false prophets.”

Despite her efforts, Stewart hits a button, and the cube plummets to the ground anyway. Lily and Forest crawl out from the glass shards, but both appear to die. Katie, hyperventilating, asks Stewart why he did it. “Because I realized what we have done. Someone has to stop this,” he says. “Don’t blame me, Katie. It was pre-determined.” (If it was preordained, how did Katie and Forest not foresee Lily and Stewart’s actions? Was Stewart just correcting an overt flaw in the system by ensuring that their fates got back on track?)

Shortly after, we hear Katie’s voice from the visualization chamber, and Forest appears on-screen in the system. Katie confirms that Lily made an actual choice, which is why Devs couldn’t see beyond that point. The system is all knowing, “but only on Lyndon’s principle.” “I want ’em back so much,” says Forest. “Wish me luck,” he says as he evaporates.

Lily comes back to consciousness in her apartment with Sergei still alive. She’s freaked out and has her memories intact. The two arrive to Amaya for a totally normal day of work (not), and after saying goodbye to Sergei, she treks through the woods toward Devs. She comes to a clearing and sees Forest reunited with his family. Forest confirms that they’re in the system. It’s resurrection, as promised, he says. “See it as an afterlife. Paradise… You have your life back, Lily.”

Forest and Lily have been rebooted into a simulation, their memories serving as “the cross we have to bear,” according to Forest. They now exist in many worlds. Some are closer to hell, but this one is a paradise where they can live with their loved ones. As he speaks, we see the same conversation through multiple perspectives and moments in time. “I thought knowledge would be a comfort,” he says, noting that he also made a choice. “Thought I’d exercise a little free will.” There’s something special about her, and he didn’t want to change it. He then tells her to follow her own path. “Let’s get coffee sometime.” And with that, Forest heads back to his family reunion, leaving Lily reeling.

The series closes with Lily going to find Jamie, who is also alive and well in their newly rebooted playscape. She hugs him, as he confusingly stares into the distance.

Was this a satisfying conclusion? Where do you stand in the determinism debate? Grade the finale and series, then drop your burning questions and comments below!