FX’s What We Do in the Shadows this Wednesday scared up a couple of new supernatural creatures — to hilarious effect — with its double-episode Season 2 premiere.

But first, a catch-up on what the gang has been up to since we last tuned in. Guillermo has been fending off the vampire assassins who have been descending upon the house, dispatching with about a dozen so far while keeping their existence a secret from the others — lest he reveal himself to be a quite effective vampire killer. Nandor had a brief “enlightenment” when, in the midst of vaporizing, he got sucked into an air humidifier. Colin Robinson bought himself a hep convertible with which he blocks traffic to the Lincoln Tunnel. (Ugh!) And Laszlo and Nadja have been positively burning through new familiars, with six or seven consecutively perishing by a variety of amusing means.

But in Episode 1, Laszlo and Nadja (and Nandor for that matter) are beyond taken with their very latest familiar, Topher Delmonico (played by seer-of-dead people Haley Joel Osment), who to them is a most dutiful and dedicated servant… but in reality is just a slacker bruh with side hustles and zero dream of becoming a vampire one day. (He’d he quite content as a warlock.) Topher’s indifference to all that Guillermo holds so dearly greatly irks the latter. One evening, Topher accidently gets electrocuted — but rather than simply mourn him, Nadja gets the idea to have a necromancer, Wallace (Doctor Strange‘s Benedict Wong), resurrect him. Laszlo is wary of this souvenir-hawking “shyster,” and rightly so. After Wallace pockets the vital $350 (cash) and pulls himself away from his text messages long enough to bring the dead back to life, it soon becomes apparent — at least to Guillermo — that Topher is now a ravenous zombie.

Nandor & Co. shrug off Guillermo’s theory, until the two familiars get into it a bit, and Guillermo drives a stake into, and then accidentally high-fives the arm off of, Topher. Zombies are gonna zombie, though, so the fight carries on and on and on, until Nandor steps in and, after several tries, puts an end to Guillermo’s attacker. Afterward, the vampires demand a makegood from Wallace, but settle for semi-personalized license plate keychains. 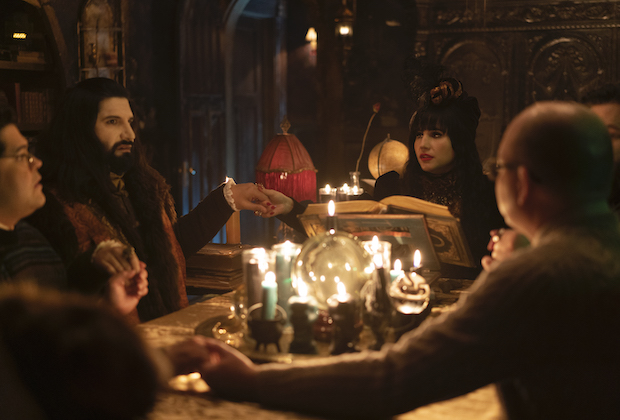 Episode 2 of the new season introduces into the house a ghost — and we in turn learn that while vampires and werewolves and even a “badabook” are very real things to Nandor & Co., the bloodsuckers do not believe in spirits. That is where they draw the line, Guillermo marvels. Nadja nonetheless conducts a seance that summons, no, not the burrito Guillermo had for breakfast, but the spirit of Jeff aka the reincarnation of Nadja’s Gregor. Nadja, though, has no patience for Jeff’s “unfinished business,” seeing as without a corporeal body, there is no Gregor in him.

Jeff’s appearance, however, gets the roommates thinking about whether, being quite dead themselves, they have their own “ghosts” out there — and a second seance indeed makes their spectral doppelgangers appear. Nandor is unable to communicate with his (outside of “Good morning”), having forgotten his native language; Nadja gets along famously with hers, after a brief clash over the former not fulfilling her potential; and Laszlo… well, his ghost’s unfinished business involves the epic, unfinished orgasm he was having at the time Nadja killed him.  And since his ethereal mitts can’t quite get the job done, maybe Laszlo himself can land a not-so-proverbial hand…?

In the end, Nandor comes to realize that his ghost longed to be reunited with their beloved (but tasty) steed, John (sp?); Nadja opted not to let her ghost go, so instead she is inhabiting a creepy doll; and Laszlo… well, let’s just say the ceiling of his study is a complete mess of… “ectoplasm.”

Oh, and as for Colin Robinson? Now experimenting with life-draining humor, he closes out the second episode by conjuring his dead grandmother, if only so that he can get someone to finally ask him what “updog” is.

What did you think of Shadows‘ double-episode return?