CBS’ NCIS brought Season 17 to a(n early) close with an episode that ultimately sent Gibbs on a 5,000-mile journey, but not before he took an even bigger step — by opening up to a colleague.

The ersatz season finale (four episodes were left unfilmed, due to the pandemic-related shutdown) found Gibbs’ team laboring to verify the claim of a 95-year-old man (guest star Christopher Lloyd) who tried to use a purloined Purple Heart to secure his ashes, upon his eventual death, a place in interment at Pearl Harbor. Tried as they may, the team could not place this Joe Smith aboard the USS Arizona on Dec. 7, 1941, despite his insistence that he had used his older brother’s ID to sneak into service.

In the absence of physical evidence, the special agents again and again pressed Joe Smith to regale them with detailed accounts of his actions during the attack on Pearl Harbor, but the nonagenarian kept mum. Eventually, though, Gibbs compelled the man to open up — and that, he did, with a vivid, heartbreaking monologue about how he just barely survived the Day of Infamy, while his best buddy did not. Afterward, upon carefully clocking Joe Smith’s right arm that long ago had been scarred with burns, Gibbs had the idea to have it x-rayed. And embedded deep inside, Jimmy found shrapnel that was proven to be from the bombed Arizona.

Joe Smith died shortly after sharing his story with Gibbs. But before Gibbs escorted the vet’s ashes to Pearl Harbor, he decided that he, too, needed to open up about his own wartime experiences, in Kuwait. “Hey, McGee…. You got a minute? I want tell you something about Joe. Something about me.” And so he invited McGee to grab a seat in his living room and hear what he had to share about how war changed him. How “you come home, and you’re like half a person.”

TVLine spoke with NCIS co-showrunner Frank Cardea and co-EP Gina Monreal, who wrote “The Arizona,” about Gibbs opening himself up in such a meaningful way, who that random agent “Omar” was, and what this season’s actual finale would have — and to a degree, some day will — look like.

TVLINE | Do you think that the Gibbs from three or even two years ago, even if he went through this Joe Smith experience, would have opened up to McGee in that penultimate scene?
FRANK CARDEA | I don’t think he would have. I think we have seen a new Gibbs this year.
GINA MONREAL | I completely agree. I completely agree. To me, this was a way of doing a father story for Gibbs. He sees his father in Joe, he looks at his bracelet several times, he says, “That’s how these guys are,” WWII vets. He’s talking about his dad in a certain way. It’s an opportunity for Gibbs to connect with someone like his father, and through this story he does open up. But the Gibbs of three years ago might not have gotten there. He’s definitely evolving.
CARDEA | I’ll let you in on a little anecdote: the original cut of this episode was 13 minutes longer. Sometimes they run a little long, but this one ran really long, so we had to cut some moments that I miss. But it was really important to me, that scene with McGee. We could have easily cut from “Joe gets to go to Pearl Harbor” to Pearl Harbor, but it was so important that we kept that scene with McGee intact. A lot of people are going to be talking about the performance of Christopher Lloyd, and it is amazing, but for me the performance by Mark Harmon is the rock that keeps the whole episode together.
MONREAL | Totally. 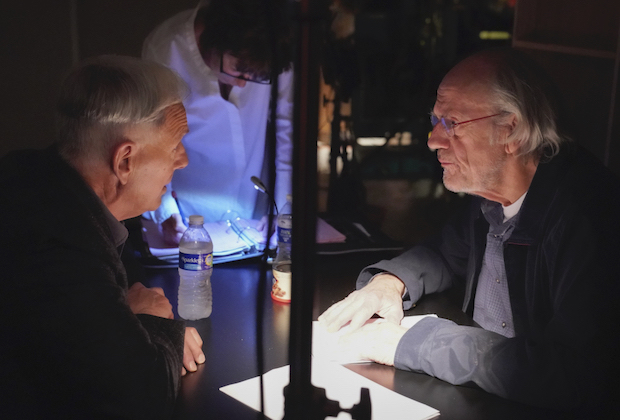 Harmon and Lloyd on set for ‘The Arizona’

TVLINE | I was watching Mark during Christopher Lloyd’s big monologue, and I don’t think I’ve ever seen Gibbs like that, where his eyes were almost wet. I was like, wow, this is really affecting Gibbs, and maybe even Mark.
MONREAL | And if you look at his performance throughout, what he does in the silent moments, how he reacts in between dialogue…. It’s just extraordinary.

TVLINE | Frank, nearly 400 episodes in, do you still get feedback from Mark? Like, “That was a real firecracker of a scene”?
CARDEA | Oh yes. [Laughs] Yes, yes, yes. Mark is great about it. Mark is an executive producer on the show and he very rarely gives you notes, but when he does it’s on himself. You may have noticed in the middle of the episode, Mark walks through the squad room and there’s an agent walking by and he goes, “Omar, I haven’t got time!” and he keeps walking. Well, Omar Lopez is the newly installed director of the actual NCIS, for real. (Lopez was sworn in June 2019.) It’s been a tradition with the show, going back to Season 1, that when the director of the agency comes to visit, we have him walk through the squad room, hand off a coffee or whatever. As I said, we were 13 minutes over but we kept Omar in, and the only note Mark gave us on the scene was, “You used the wrong take of Omar! He gave us a better reaction.” We ended up with the original take that the director put in, but we went around and around and around with Mark on that one.

TVLINE | Thanks for pointing that out, I was curious about conspicuous Omar.
MONREAL | We’re sure people will be wondering. [Laughs]
CARDEA | The other great story about Omar is that he came to visit in Season 1 — when he was a probie. This is how long the show has been on. He was a JAG lawyer who joined NCIS 17 years ago, back then he visited the set with someone else, and now he’s head of the agency.

TVLINE | At the time production shut down, where were you at with the four unaired episodes?
CARDEA | [This week’s] was supposed to be Episode 20 of 24. We had two days left to shoot this episode when the decision was made that we had to shut down, so we made the executive decision to shoot on a Saturday, which is never done [on our show]. Saturday, March 14 was our last day of shooting, and the post-production parts were all done remotely; it’s amazing what you can do nowadays.

Episode 21 was two days away from production. The sets are built and now locked up in our stages, the locations were pulled, the actors had been cast…. That’s probably what we will shoot first [whenever production resumes]. Episode 22 was going to be our 400th, which we had special things planned for and CBS was throwing a big party for us…. But it will happen. We have a lot of flexibility to air the first five or six episodes [of next season] in any order we want, but we will still shoot 400 as the second one and air it as the second one. (Get details on the Episode 400 storyline.)

TVLINE | Did the originally envisioned season finale end with a big reveal/development, or a life-and-death cliffhanger?
CARDEA | The envisioned season finale did not have a cliffhanger ending but was planned to have a very surprising ending. More of a reveal/development, as you phrased it. We do plan to go forward with that episode in the early part of Season 18, but will probably reevaluate the ending when the time comes.