A new spinoff of The Bachelor puts a musical twist on the familiar dating show formula, with aspiring musicians competing to find love and achieve stardom… but is it all just a little too “Shallow”?

Yes, the spirit of A Star Is Born looms large over The Bachelor Presents: Listen to Your Heart, with the contestants all looking to find that Jackson-and-Ally chemistry with someone special. (But they know that movie’s love story didn’t end too happily, right?) Host Chris Harrison cops to the Star Is Born connection from the start of Monday’s premiere, admitting that they’re trying to “conjure up a little more of that magic” while a very “Shallow”-like acoustic guitar riff strums on the soundtrack. (One guy even declares in the preview, “It’s just like A Star Is Born!” OK, we get it, ABC.)

Listen to Your Heart throws 20 single men and women, all musicians, together in the Bachelor mansion, where they’ll pair up and perform duets together — and if they can’t find a match, they get sent packing. The crop of singles includes military vet Brandon, musical theater nut Bekah (who yells at herself in the mirror, “You deserve love!”), yoga instructor Savannah and American Idol also-ran Trevor. (Hey, Katy Perry thought he was hot!) They all pile into the mansion, minus the usual limo arrivals, and Savannah gives off a villain vibe right away. (“I think my confidence is intimidating… if I’m looking for just a pretty face, like, let me go find the people back at my modeling agency, you know?”) 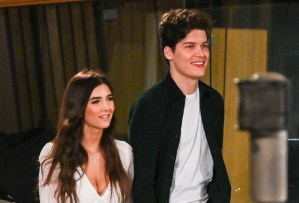 Ryan and Jamie pair off right away, and he opens up to her about his childhood brain seizures… but her eye wanders as soon as Trevor walks through the door. Rudi, meanwhile, is a handful: She is 24, and she is tired of dating already, guys! (She kind of seems like a Bachelor super fan who snuck into the mansion just to make catty comments.) She and a bearded dude named Matt quickly hit it off, though. And to fill the douchebag quotient, Michael shows up and sings in possibly the weirdest voice I’ve ever heard about his “hot touch.” (He also blatantly hits on Savannah with this can’t-fail pick-up line: “I like your looks. A lot.”)

More contestants keep streaming in, including long-haired hat aficionado Sheridan and Connie Britton clone Julia. Once everyone’s in the door, Chris Harrison tells them how this will work: They’ll go on dates each week, and yes, there will be rose ceremonies. With 12 men and 8 women, that means four guys are going home at the first cut. (Dun-dun-dun.) That inspires Sheridan to pull Julia aside, and they seem like they’ll be one of the core couples… until Brandon steps in and catches Julia’s eye, nabbing the season’s first kiss. Ryan and Jamie share a cuddle and a kiss, too, but soon after, she and Trevor bond over their shared love of… yep, A Star Is Born! While Ryan tinkles away on the piano, Jamie sneaks into the hot tub with Trevor for a steamy make-out session. (Jamie, it’s the first night. Slow down, girl!)

To maximize the drama, the first date card goes to Ryan, who picks Jamie to join him at a recording studio at Capitol Records and record a cover of John Mayer’s “Gravity.” They kind of freak out — they’re both big John Mayer fans — but they pull together a nice version and then enjoy a rooftop kiss at sunset. Meanwhile, back at the mansion, Matt gets Date Card #2 and picks… not Rudi, but Mel! (Guess Rudi rejecting his kiss the night before really backfired on her.) While Rudi complains to the other girls and (literally) sings the blues, Matt and Mel enjoy a private concert from the Plain White T’s. 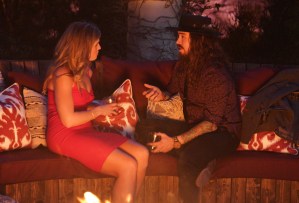 Some cracks start to form ahead of the rose ceremony: Sheridan sees Julia locking lips with Josh, so he pulls her aside to compose a song together — and they kiss, too! Matt admits he and Mel didn’t have much chemistry on their date, so he decides to “circle back” with Rudi, and he stammers through an quasi-apology as she hammers him for leading her on. Trevor senses Jamie slipping away, so he plays her a song (of course) and they make out a little more (of course). She’s confused, guys! At the rose ceremony, Savannah picks Brandon, Mel picks Gabe, Bekah picks Danny, Bri picks Chris, Cheyenne picks Matt (!), Julia picks Sheridan… and then there’s Jamie.

After looooots of build-up, Jamie hands her rose to Trevor… but then Rudi gives her rose to Ryan, so he’s sticking around anyway. (Thanks, producers!) That means Michael the smoothie and three other guys we barely met are going home… and in next week’s preview, a new girl shows up to accuse Trevor of being a serial cheater. So that’s fun!

Alright, Bachelor Nation, it’s your turn: Give the Listen to Your Heart premiere a grade in our poll, and then hit the comments to share your thoughts.