Villanelle isn’t clowning around this season on Killing Eve… well, OK, she kind of is, actually.

The effortlessly chic murderer for hire played by Emmy winner Jodie Comer returns for a new season of globetrotting kills this Sunday (BBC America, 9/8c), and that means new accents and costumes — including one mission at a kid’s birthday party that has Villanelle and an associate dressed up like party clowns. Depending on how you feel about clowns, it might be Villanelle’s most terrifying disguise yet… and it wasn’t Comer’s favorite, either.

“I actually have a newfound respect for clowns after wearing that costume,” the actress tells TVLine with a laugh. “We shot that in Barcelona, and it was so hot. I don’t even know what material that costume was made out of, but it was not breathable, and those shoes are so hard to walk in. When I left the set that day, I was like, ‘You know what? Hats off to them, that they manage to stay smiling and entertain kids, when actually it’s just pure misery underneath.'”

When she’s not suffering in clown makeup and big floppy shoes, Villanelle gets an unwelcome blast from the past with the arrival of Dasha, played by Harriet Walter (Succession, Downton Abbey), a legendary killer in her own right who wants to bring Villanelle back to work for The Twelve. As new head writer Suzanne Heathcote explains, “I was really interested in a female handler who [Villanelle] had a begrudging respect for… Dasha, in her day, was brilliant, the best, and has made Villanelle what she is today, in terms of her skill.” But, as Comer warns, “this woman is extremely dangerous and playing her own game.” 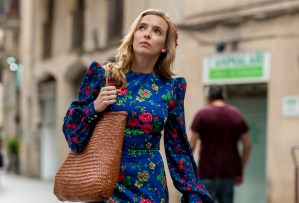 Villanelle wants to play her own game in Season 3, too: After years of being a hired gun, she’s looking to take on a more executive role as a handler. “She’s kind of done being controlled,” Comer hints. “There’s always someone who is the puppeteer and is making her do what they need to do, and you can see how that slowly, slowly chipped away at her.” And as executive producer Sally Woodward Gentle notes, last season’s betrayals by Eve, Konstantin and MI6 helped her realize “that actually, she was a very, very small piece of the puzzle, and that she could be manipulated, and she could just be abandoned. She doesn’t want that anymore. That would be massively damaging to her ego as well.”

Season 3 also gives us our deepest insight yet into who Villanelle is. In the second half of the season, starting with a pivotal Episode 5, she goes on a personal journey to reconnect with her roots, Comer says: “She’s having a complete identity crisis at this point and dealing with a lot of her own personal stuff… It felt right to give this character some more depth, and that’s something I was definitely craving to do.”

Check back on Sunday for TVLine’s thorough breakdown of the Killing Eve season premiere.