Warning: The following contains spoiler’s for Thursday’s emotional episode of Station 19. If you’d rather watch first, read later, drop this recap like it was hot. 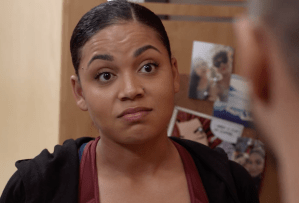 ‘STOP NAMING INAMINATE OBJECTS AFTER WOMEN’ | As “I’ll Be Seeing You” began, while Pruitt played poker in the firehouse’s kitchen with some (literally) old buddies, Emmett told Travis that he didn’t want their relationship to be over, and Vic balked at finding Jackson working out with Ben in the gym. She couldn’t move into his house without telling him, but he could move into hers? Later, after he took a shower and emerged “from a wall of steam like some kind of sexy ghost,” she laid down some ground rules: He could never sleep at the firehouse, he could never be naked there, and dammit, he had to stop smilking (half-smiling, half-smirking like he knew something she didn’t). Clearly, it wasn’t as over for the two of them as, for Dean’s sake, I had hoped. Also clear: Barrett Doss is a gift from the romcom gods.

Shortly, the old flames (can I call the senior firefighters that?) turned on the radio to listen in as the A team reported to a storage facility in order to extricate someone stuck in one of the units. Only it turned out to be three guys, one of whose cigarette had started a fire… which had then spread through the vent to other units. Gah, it’s never simple for the A team! And it would soon get even more complicated. When Travis went to ventilate the building’s roof, he found that it was unstable; if he so much as stepped on it, he’d fall through. So they’d have to chainsaw through the walls to let smoke out. One more thing, said the facility’s owner. Everybody hadn’t been evacuated: He hadn’t seen Luke, the homeless fellow that he secretly allowed to live in a unit. See? Never simple for the A team! Never even just minorly challenging! 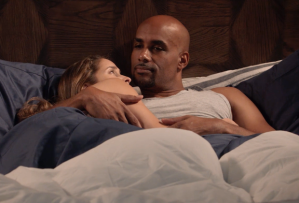 ‘I DON’T WANT TO GET MARRIED TO CHECK A BOX ON AN HR FORM’ | When Andy reentered the facility to help her peers look for the missing person, Sullivan flashed back to a pillow talk that he’d had with his girlfriend. In it, he swore not to repeat his forebears’ mistakes by putting his job first. “I love you,” he said, “and I want to marry you.” Back in the present, new dad Dean panicked when he and Vic found Luke… unconscious and bleeding in a unit that was blazing. Yeah, Dean was really feeling the pressure not to die on lil’ Pru. In an adjacent locker, Jack and Andy discovered a bunch of propane tanks! I repeat: Gah! As Ben and Jackson treated Luke, Avery worried about Vic and marveled that Bailey had been able to deal with her husband running into fires. Uh, she hadn’t, Ben pointed out. She’d had a heart attack. Hilariously, Jackson was taken aback to have to intubate the patient; he was used to that being done for him. So this was “kind of like having a Lamborghini mechanic tune up a pickup truck,” he said, adding quickly, “Please do not tell Vic I just said that.”

While Ben and Jackson operated on Luke with Maggie’s help via monitor (was that Zoom?), the propane tanks blew, knocking the wind out of Jack and Andy. Overhearing on the radio back at the station, Pruitt took off for the scene. Soon, it seemed that all of the firefighters that were still in the storage facility were lost. Every hallway looked the same, especially now that they were filled with smoke. “Is this how we die?” Emmett asked Travis before collapsing. Outside, Sullivan put Maya in charge of the exterior as well as the interior so that he could go in and save the woman he loves. In another flashback, Andy confessed that she’d recently slept with almost-ex-fiancé Jack, and Sullivan admitted that he’d stolen fentanyl from the PRT. And OD’d. And almost died. And when he made amends for that, he might lose his job. Definitely beat Andy’s revelation that she had 100 pairs of socks because she hated doing laundry!

‘SOUND THE DAMN BELLS’ | Inside the burning building, Sullivan had no sooner found Andy than their way out was block by flaming debris. Jack, down to his last lungful of air, collapsed. Really, they were all in dire straits in there. When Pruitt showed up, we caught glimpses of the wedding he’d never get to attend, a City Hall service at which he gave away the bride. But at least, thanks to him, there could be a wedding at all. Before he ascended to the roof to ventilate it or and die trying, he asked Maya to “tell Andrea that every single thing I did her whole life, I did because I love her.” With that, he stepped out on the roof and began bashing at it until he himself fell through to his death. He’d given not only Andy but all of the firefighters trapped inside the building the gift of life. When the smoke cleared and they made their way outside, Andy spotted her father’s baseball cap and knew in an instant that he was gone.

So, what did you think of Pruitt’s last stand? Will Sullivan really be fired when he comes clean? And how freaking funny were Vic and Jackson? (And that’s coming from someone on Team Dean/Vic!) Hit the comments.