With network shows wrapping early and endless streaming options at our disposal, the communal viewing experience is becoming a rarity. Enter the TVLine Binge Club, a new opportunity for everyone to get back on the same page — or at least the same channel — to reflect on classic shows that once brought us all together.

Let’s get this out of the way right out of the gate: Felicity‘s ratings did not plummet in Season 2 because Keri Russell cut her freakin’ hair. It’s an attention-getting (read: lazy) headline and a fun piece of TV trivia, but it’s not true. Felicity‘s viewership plunged because someone at The WB thought it’d be a swell idea to move the show from Tuesdays, one of the network’s highest-rated nights, to Sundays, the net’s worst-performing evening by a mile. As a matter of proven fact, the series’ ratings downturn was already well underway when Russell’s titular character debuted her new ‘do in Season 2’s third episode. One had absolutely nothing to do with the other.

Among the unfortunate byproducts of this false narrative’s 20-year propagation was that it overshadowed the season’s real headline: Felicity Season 2 was a masterpiece. Series creators J.J. Abrams and Matt Reeves followed up the show’s breakout, Golden Globe-winning freshman year with a superior sophomore run. (Disclosure: I am developing a TV series with Abrams’ Bad Robot and HBO Max about my childhood.) Not only did Year 2 feature Russell’s strongest work on the series, but it yielded many of the show’s most memorable episodes — so memorable that it was almost impossible to limit TVLine’s Binge Club assignment to just five (which is why I cheated and went with six-plus). 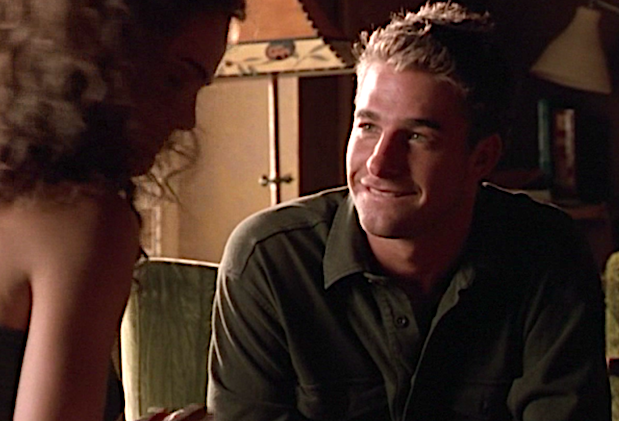 1. “SOPHOMORIC” (S2, E1) | Fans waited four months to find out if Felicity chose Ben or Noel, so what’s another 12 minutes? That’s roughly how long Abrams (who penned the episode) teased out the cliffhanger’s resolution in this ingeniously structured hour that found Felicity slowly, agonizingly recapping her summer to Sally and a hilariously impatient Javier. When we finally learn that she chose Ben (woo-hoo!), and that the pair are officially a couple, the reveal — which is sealed with a literal kiss — is as satisfying as it is swoon-worthy. And Russell perfectly captures Felicity’s bliss. “I can’t believe I used to hope I’d just run into him,” she gushes to Sally. “And now here we are kissing in the backroom and making plans.”

Her dream fairytale ending quickly devolves into a nightmare when she begins to assess the collateral damage her decision wrought — and this is when “Sophomoric” goes from great to utterly superb. The heretofore optimistic, romantic hour takes a foreboding turn, giving rise to a string of scenes that are alternately heartbreaking, darkly hilarious and downright vicious. The interplay between Russell and Scott Foley’s bitter, scornful Noel is particularly brutal. Sample dialogue: “I was a little annoyed at first wondering what positions you guys were in… whether he was on top or you were on top.” When all three members of the triangle have a run-in later in the episode, the wickedly crafted insults fly so fast and furious one can barely keep up. The tension inevitably begins to take its toll on the newly-minted super couple, leading Ben to invade Felicity’s privacy by covertly listening to her latest recorded message to Sally (in which she suggested she might be falling in love with him). And with that, the season’s audaciously dark turn officially takes root.

Other observations from “Sophomoric”:

* The original opening title sequence never fails to emotionally trigger me, in all the best ways. Felicity debuted not long after I graduated college and while I was in the midst of navigating my first serious romantic relationship (and subsequent breakup).

* Amanda Foreman and Russell give a master class in comic timing in the scene where Meghan humiliates Felicity during their first meeting as co-RAs.

* Michael Pena makes his debut as Felicity-crushing Burky, and I totally forgot he was on the show!

* I also had forgotten that Felicity and Ben did not consummate their relationship right away. That’d be downright scandalous in today’s young adult TV sphere.

* The episode reminded me how refreshingly quiet and meditative the show is. The characters rarely scream and dialogue is given room to breathe. It is the perfect tonic for these scary, uncertain times. 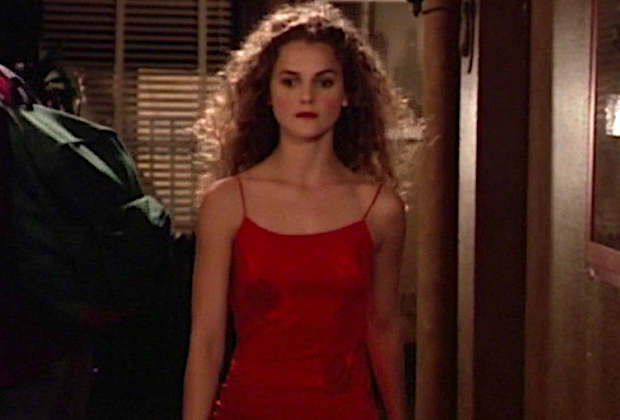 2. “THE LIST” (S2, E2) | The infamous haircut episode succeeded not in spite of Felicity’s extreme makeover but because of it. Regardless of whether you loved or hated the new ‘do (and we’ll get to that in Episode 3), there is absolutely no denying that Felicity’s impulsive decision to drastically alter her appearance made sense narratively. It felt like something Felicity would do, especially when you consider what preceded it.

And there was a lot that preceded it, so much so that referring to it as the “haircut episode” is a bit disingenuous since the trim doesn’t take place until the hour’s closing minutes (and the big reveal itself is held until Episode 3). “The List” is primarily about the gradual demise of Felicity and Ben’s short-lived romance, and our heroine’s resulting epiphany. Their breakup is messy, complicated and heartbreaking, and so beautifully rendered by Russell and (the underrated) Speedman. The Act 1 scene that begins with Felicity looking on as Ben unenthusiastically thumbs through photos of their summer together and ends with the pair reluctantly agreeing to part ways was a triumph of not only acting but of direction (by Barnet Kellman) and writing (by Jennifer Levin), too.

* Meghan-centric cold opens bring me so much joy, and this one — which finds the wannabe witch reneging on a deal with Felicity to reveal the contents of her mysterious box — is no exception. So much of it is in the abrupt timing of the cutaway to the opening title sequence.

* Felicity’s high-voltage red-venge dress stands the test of time, oh yes it does.

* The sight of Felicity sitting alone in Bryant Park biting into that sad chicken salad sandwich after getting stood up by Ben still fills me with rage. The first time I saw it, I nearly decamped to Team Noel. (Relax, I said nearly). At least now I know there’s a huge payoff coming in “The Aretha Theory” (more on that later).

* The episode’s one flaw: Felicity awkwardly referring to the barber shop/hair salon where she got her massive trim as “the haircutting place.” Yeah, that’s not a thing anyone says. 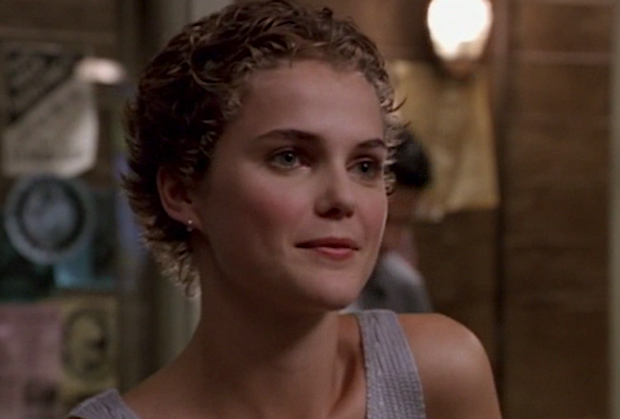 3. “ANCIENT HISTORY” (S2, E3) | The haircut blowback actually was ignited by the show itself. The episode opens on Meghan’s horrified reaction to the new ‘do — “Wow, bad,” she sneers at her roomie  —and you gotta give the show credit for getting way out in front of the forthcoming backlash, even if it was done unintentionally. It takes guts — not to mention a healthy sense of humor — for a show to stage such a mammoth twist and then immediately torch it. (For the record, I never felt strongly one way or the other about the actual haircut. It was… fine.)

And the hits keep coming. After receiving a smattering of positive feedback from Burky and Ruby (Amy Smart’s debut!), a still-sour Noel gives the trim an enthusiastic thumbs down. “It’ll grow out, right?” he asks, before shrugging, “So you have a bad hair year. Go buy a hat.” Nasty Noel is my favorite Noel, partly because it brings out Fiery Felicity. And “Ancient History” is an embarrassment of Nasty Noel-Fiery Felicity riches.

In the wake of her physical transformation, Felicity makes a momentous decision that has significant repercussions throughout the rest of the series: She drops pre-med to focus on her unexplored love of art. That puts her squarely back in Noel’s orbit and leads to at least three acidic confrontations before the pair finally conducts a long overdue and wonderfully awkward come-to-Jesus talk about the Ben of it all. That, in turns, sets up the wholly satisfying and deeply emotional climax wherein Noel comes to his ex’s defense during a brutal art history class takedown. Felicity’s subsequent heartfelt apology brings their three-episode feud to its very natural-feeling conclusion.

Other observations from “Ancient History”:

* Felicity and Noel make better friends (and occasional frenemies) than lovers, and this episode proves it.

* The first seeds of the winsome Noel and Ruby romance are planted here.

* Felicity cements her gay-icon status when Noel’s crush Brigid (without a T) reveals she’s a lesbian and in a long-distance relationship with a woman, and our girl barely bats an eye. When Felicity replies with an empathetic, “That must be tough… ” we think she’s referring to her sexuality, until she adds, “Being in a long-distance relationship.” I love her so much I can’t stand it sometimes.

* Silence is golden again: The dialogue-less scene wherein roomies Sean, Ben and Julie just casually go about their morning routine is so incredibly effective I nearly forgot how much I despise having roommates.

PROCEED TO NEXT PAGE FOR THE REST OF OUR FELICITY SEASON 2 DISSECTION!