The flashing blue lights and pulse-pounding music are back: Who Wants to Be a Millionaire returned to primetime on Wednesday night… with a new face in the host’s chair.

Jimmy Kimmel takes the reins from original host Regis Philbin in ABC’s revival, which marks the first time Millionaire had aired regularly in primetime since 2002. (We should note, though, that Millionaire continued in syndication until last year, with Meredith Vieira, Cedric the Entertainer, Terry Crews and Bachelor host Chris Harrison all handling emcee duties.) Kimmel might not be as giddy as good ol’ Regis, but he did offer up a few choice zingers throughout the premiere: “Tonight, we are gonna party like it’s 1999 with the return of the most dramatically lit show in history,” he quipped in his intro.

The revival puts celebrities in the hot seat, answering multiple-choice trivia questions to win up to $1 million for their favorite charities, and there are a few small tweaks to the format: One of the lifelines is now “Ask the Host,” so contestants can ask Kimmel to weigh in, and they could also bring a friend along to help them with the first 10 questions. Wednesday’s premiere featured Modern Family star Eric Stonestreet — appropriately, since Millionaire followed the Modern Family series finale — and SNL veteran Will Forte. (The effect of the coronavirus pandemic was evident as well: The episode was filmed without an audience, and Kimmel elbow-bumped Stonestreet as he arrived on stage.) 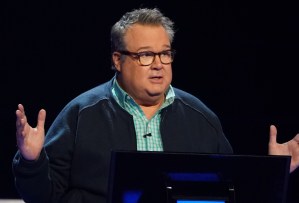 Stonestreet went first, playing for his sister’s Kansas City-based charity Building Hope for Autism, and he zipped through the first eight questions with help from Modern Family writer Danny Zuker. He got tripped up, though, on a question about HBO’s Succession (!) and had to burn the “Ask the Host” lifeline to get the correct answer from Kimmel. (He could’ve asked us!) After 10 questions, Stonestreet traded his 50:50 lifeline to keep Zuker around for one more question, and Zuker helped him secure $64,000 with a correct answer about postal abbreviations. A question about Oscar-winning films was a nail-biter, with Stonestreet spending his “Phone a Friend” lifeline and Kimmel taking a very rude commercial break mid-answer, but Stonestreet ultimately got it right and secured $125,000. A toughie about the Statue of Liberty’s official name, though, led him to bow out and take that $125,000 home to his sister’s charity. Nice job, Fizbo!

Forte took his turn late in the episode: Playing for the Pangea Network and bringing in his dad Reb to help, Forte hesitated on the very first question — admittedly a curveball about the Brad Pitt film Ad Astra — but recovered and cruised to the $1,000 mark before getting cut off by the end of the episode. He’ll be back next week… but will you? Give Kimmel’s performance as host a grade in our poll, and then hit the comments to share your thoughts on the newly revived Millionaire.