CBS’ S.W.A.T. team this Wednesday raced to find former unit leader Buck after he fell conspicuously off the grid and they came to realize he planned to harm himself. As that manhunt played out in flashback, we saw each team member discuss with a counselor the mental and emotional difficulties inherent to their line of work, all the while never quite disclosing Buck’s ultimate fate.

Midway through the hour, Buck (played by Louis Ferreira ) was tracked down via telephone — alive, at a diner, but unwilling to hear out Hondo (Shemar Moore) and put off what he intended to do. Deacon (Jay Harrington), luckily, found his longtime friend and colleague seated by a river bed, handgun at his side. And though Buck seemed quite resigned to end his life, Deacon’s words, as well as those from his successor Hondo and protege Jim Street (Alex Russell), eventually convinced him not to — if only because of the immense sense of loss he would leave friends and family with.

S.W.A.T. showrunner Shawn Ryan, of course, broached this topic during his time on The Shield, where — no spoilers, for anyone mid-quarantine binge — suicide ended the lives of at least two characters.

“I don’t know that we did the research on The Shield that we did on S.W.A.T.,” Ryan shares with TVLine. “Those were stories that we sort of approached from a plot standpoint, but in this case, it really stems from the research we did. For example, I was stunned to learn, as we say in the episode, that more officers die by their own hand than in the line of duty. And I’ve always been fascinated, going back to The Unit, by this mental price that first responders — whether they are in the military or in law enforcement — pay, and the anguish they go through, to do the jobs we expect them to do, to keep us safe.”

Ryan says that S.W.A.T. as a rule affords itself extra prep time “to do things like big stunts, or find big locations that are hard to get” — or, this case, to study a topic like police depression and suicide. To that end, he tasked writer Ryan Keleher to “find out who the right people are to talk to, talk to everyone you need to talk to, and then let’s find out the best way to tell the story.” 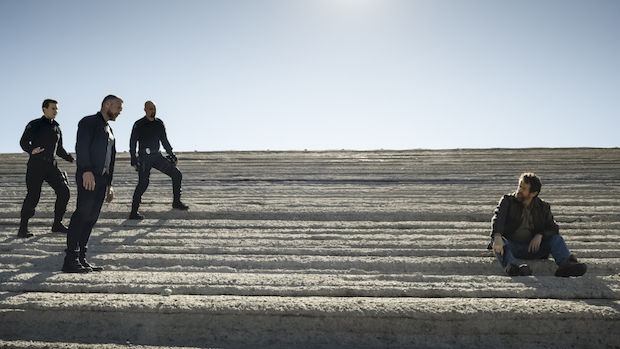 As for the tactic that Deacon, Hondo and Street employ to eventually save Buck’s life — essentially making it about them, and the deep loss they would have to live with — Ryan says, “A lot of time these people are feeling so alone and isolated they’re not acknowledging the importance they have in other people’s lives.”

Ryan cites The Bridge, a 2006 documentary about people who have leaped off the Golden Gate Bridge. Among the small percentage who wind up surviving the jump, some have said “almost immediately there was instant regret. Like, ‘I don’t really want to die.’ So the officers talking to Buck really put the emphasis on what this act would do to them and their loved ones, because a lot of people who are in crisis are only considering their own pain.” 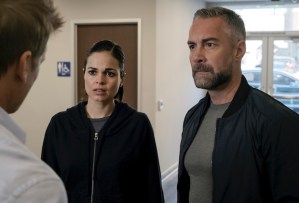 Though Buck will live to see another day, the somber episode was not done serving up stark realities. Because at the very end of the hour, during his one-on-one session with the counselor, Deacon confided, and broke down emotionally in the process, that he similarly has thought about ending it all, specifically at the time last season that his family was in dire financial straits. And with the fact that Hondo was given command of S.W.A.T., instead of him, forever on his brain.

“The Hondo stuff from the pilot, I told the writers I’m never going to let that go,” Deacon’s portrayer, Jay Harrington, tells TVLine. “He took my job — I get to have that. So when we had an episode where I was talking a guy out of shooting himself, and I said, ‘I may or may not have once had a gun to my face as well,’ I pushed for that, and I was glad that they did that as a bit of an Easter egg we could get to someday. And sure enough, here we are.”

How did Harrington get himself to such a place of pure vulnerability? “I tapped into some personal stuff that I’ve gone through,” he shares. “Before S.W.A.T., I hadn’t worked really in a couple of years. Things were tough out there. And I was getting married, bringing someone else into the mix for the first time. [As an actor] there are times when it’s feast or famine, and when it’s famine and you’re by yourself, you’re like, ‘I’ll get by.’ But bringing someone else in… there are pressures that come with that.”

“When we were shooting it, I didn’t know I was going to get emotional, because that’s a tough thing to do, especially time after time after time, take after take…,” Harrington continues. “I just wanted to bring the reality of what we worked on for the Deacon character all these years.”

On a far lighter note, Harrington suggests that in talking to the camera for that first-person reveal, “I was tapping into [his two-season comedy] Better Off Ted, where I would speak right to the fourth wall and break it!”

Moving forward, Harrington says that Deacon’s commitment to ongoing therapy will not go without further mention.

“We have an episode coming up where a uniformed officer on a scene loses a partner, and I sort of take her aside, saying, ‘There are people you can talk to.’ The way they had written it was, ‘I’ve talked to her, and she’s helped me,’ but I asked, ‘Can we change the tense? Can it be, ‘I think I’m getting better’? ‘I think it’s helping me’? Because I didn’t want it to be tied up in a bow.”

Deacon taking that step, Ryan says, represented “one of the main goals with this episode — to show that it takes real strength and courage to say, ‘This is how I’m feeling, this is what I’m contemplating, and I need help.’ You wouldn’t have a problem saying, ‘I have cancer and I need a doctor’s help.’ Your brain is part of your body, and it is something that needs attention just the same.”