As Last Man Standing entered the homestretch of its eighth season, cast member Amanda Fuller found herself behind the camera for the very first time.

Fuller, who plays Mike and Vanessa’s eldest daughter Kristin, tells us that she first approached the producers about directing an episode in Season 7. “They were very responsive,” she says. “Unfortunately, I had asked too late in the season to get a slot, so they said we’d have to make it work next season, and here we are. It happened, and it was amazing, and I can’t wait to do it again.”

Below, Fuller tees up her directorial debut (airing Thursday at 8/7c) — which in part finds Kristin’s husband Ryan on edge after agreeing to take a psych exam administered by brother-in-law Kyle — and previews what’s ahead for her very pregnant character as the Fox comedy approaches its season finale. 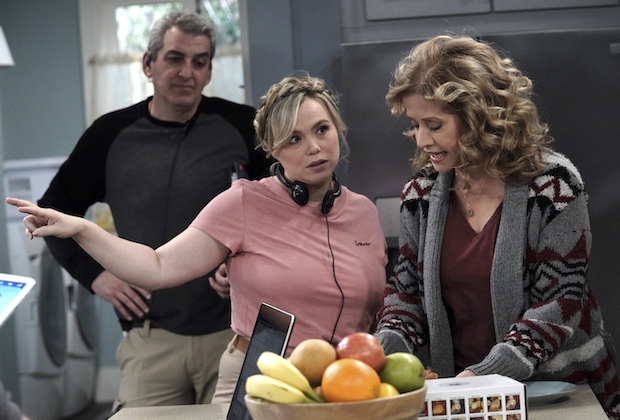 TVLINE | This is the first episode of Last Man Standing that you’ve had the privilege to direct. Was that something you’ve been itching to do?
I’ve been directing stuff for my own pleasure for the better part of a decade — short films, web series, passion projects of my own — and I never really thought of pursuing it professionally. I was not the kind of actor growing up that was like, “What I really want to do is direct.” That wasn’t my focus. I loved acting so much… My biggest hobby was photography, so I’ve always been behind the lens taking photos, and I realized that directing is just an extension of that, and combines it with all of the other things that I’ve been trained to do my entire life with acting. It wasn’t until a couple of years ago on Last Man that I thought, “What better place to start doing it professionally than here?”

TVLINE | Give me a sense of what prep looked like for you.
Primarily I shadowed [our main director] Victor Gonzalez, but I also shadowed Andy Cadiff [who directed five episodes this season]. It was challenging with a [new] baby [at home], because any time that I wasn’t on set, I wanted to be with him — especially the last couple weeks prior to my episode when I launched into full-time prep mode, and I called [on] my husband [for support]. 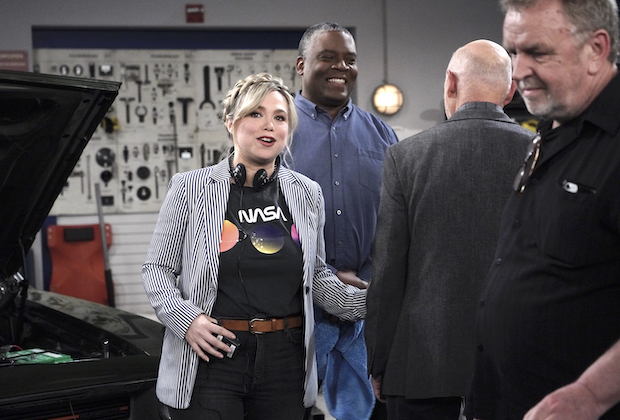 TVLINE | Did you find it helpful to see how Gonzalez and Cardiff operated?
[What] I learned by shadowing, versus actually doing it, is that you can shadow as much as you want, but your own style and your own methods are going to be so different from whoever you study. My biggest takeaway from doing this was to not try and be Victor Gonzalez when directing, but to figure out my own way of communicating with these actors who are my family, and the camera crew who are family to me but never had me in this position before. But I learned so much from watching other directors, especially in this [multi-camera] format. I’m used to doing single-cam. With all the stuff I’ve ever done on my own, I’m the DP, I’m the camera operator, I’m doing everything, so for me the challenge was to [adjust to] multi-cam, which is four cameras at all times and getting all of the coverage. It was more like a math equation than anything, [and] just kind of retraining my brain to work like that. [Multi-cam] is a very specific look and feel, so I tried to honor that as much as possible.

TVLINE | Did you find it difficult to switch back and forth between directing and acting on tape night?
No, not specifically. I love a challenge… If anything, the prospect of having to run back and forth excited me. I was happy that I at least had a couple scenes. I was worried they were going to write me out, or have me in just one scene that was pre-shot and I wouldn’t have to do anything during the live taping. In this case, I had to put on a pregnancy belly because I already had my baby [in real life], and Kristin has not, so it was quite the quick change, and it was a thrill. I would go back and relive that night over and over again if I could. 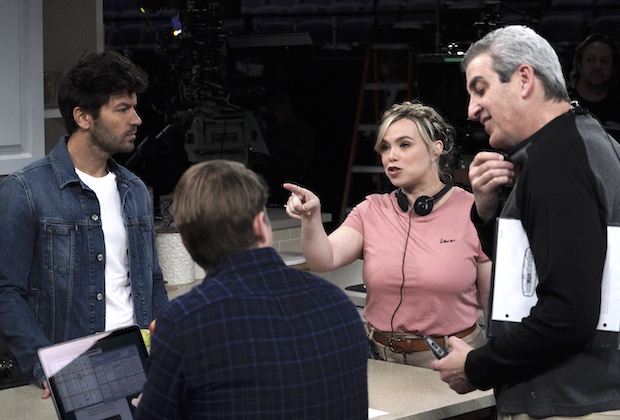 TVLINE | In the episode, Ryan takes a psych test administered by brother-in-law Kyle. How does he react when he gets the results?
However you would imagine Ryan would react to being called not chill. [Laughs] You’re in for a treat, for sure, because [Jordan Masterson] takes it and runs with it. We’ve grown to embrace the more silly [side to his character] the more outlandish they make him, and it was really fun to play [opposite] that.

TVLINE | You only got to shoot 21 of 22 episodes this season due to the production shutdown. What was the atmosphere like on set during that last tape night? Did everyone have a sense that this was probably going to be the last one for a while?
No… That last tape night, I don’t think any of us thought it would be our last. There was no talk of that. It wasn’t until Friday, after rehearsing [Episode 22] for a few days, that we were all like, “Um, how are we going to do this?” And that was only three days after our last tape night, so that’s how quickly [things changed]. We made the decision to not do it in front of a live audience on Friday, but it wasn’t until Sunday night that we actually shut down, the night before we were supposed to shoot it. So it all happened really fast. My dressing room is still intact. None of us, as far as I know, were able to go back and empty out our dressing rooms. Fox was like, “Don’t come back on the lot,” and that was it.

TVLINE | What can you tease about Episode 21, which will now serve as your makeshift finale?
The baby’s coming. I mean, the whole season’s sort of been leading up to it…

TVLINE | Was the birth of the baby going to factor into the finale that you didn’t shoot?
Yeah, it was heading that way. [Laughs] I mean, we’ll see in the last episode that we did shoot that the journey has begun.

TVLINE | So there’s still a bit of a finale vibe to it?
I would say so. It’s funny because leading up to it, I was saying it would be really cool if they made the birth a two-parter, and generally they don’t do anything that I think they’re going to do. In this case, I was close to what they [had in mind]. It’ll feel like a cliffhanger, I think, for sure.

Press PLAY on the clip below for an exclusive sneak peek at Thursday’s episode (in which Mike, Chuck and Joe crack wise as they continue to work on their car restoration project), then hit the comments and tell us if you’ll be tuning in for Fuller’s directorial debut.