Wedding bells are ringing in lieu of fire alarms on this Wednesday’s Chicago Fire (NBC, 9/8c) — but will the groom make it to the altar?

During Cruz’s last shift before his nuptials to Chloe (guest star Kristen Gutoskie), Firehouse 51 is dealt an unexpected challenge when a group of protesters chain themselves to the station’s firetrucks in an attempt to get their own community’s firehouse reopened. As the situation grows more and more complicated, you might be left wondering, “Will Cruz make it to his own wedding?” showrunner Derek Haas tells TVLine.

On top of dealing with the protest, Cruz also has a small case of wedding day jitters. “He’s nervous about all of it,” Haas says. Plus, there’s a glaring absence among his groomsmen: “He’s sad that his best friend [Otis] won’t be there. It’s a lot for him.” 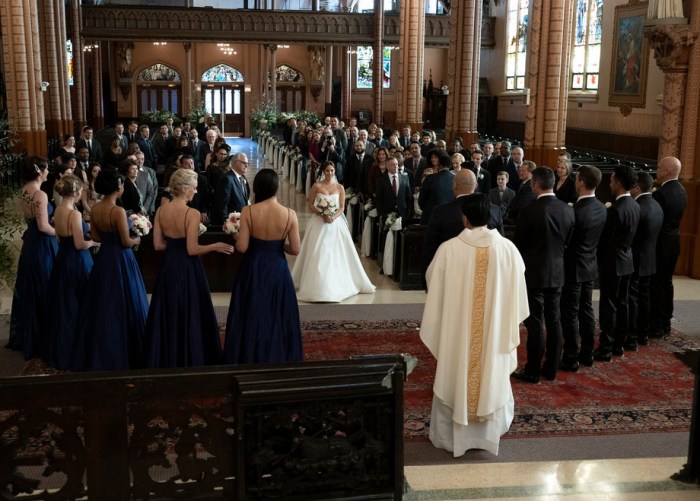 So for Cruz and Chloe’s long-awaited vows, Haas decided to go grand with an extremely meaningful venue. “We’ve never done a church wedding,” he explains, “and this is set in the firefighters’ cathedral, which keeps a perpetual flame lit for the firefighters who fought the Great Chicago Fire [in 1871]. It’s very beautiful.”

Elsewhere in the episode, the death of Brett’s biological mother Julie is “eating at” the emotionally distraught paramedic, Haas previews, before adding that “there is another complication — with Scott, the father of her half-sister — that happens.”

And just like she has for months, Brett will lean on her captain, Casey, for support. “He’s been there for her this whole time. That isn’t going to change,” Haas says. “Where it goes from there, you’ll have to watch and find out.”