With her house completely emptied thanks to Rio’s retaliation, Beth now knows the danger in duping a madman. But that doesn’t mean she’s going to stay submissive forever. A slimeball from their past unwittingly helps repair their relationship with their crime boss, but these Good Girls are playing a long game. They’re making nice before they get even.

Three months in the past, we find Boomer eating an indulgent last meal (or 10) at a diner. He’s surely acting weird (even for Boomer), inhaling pancakes and getting face tattoos before heading into the slammer to do some time. Looks like this loose end will continue being a thorn in the ladies’ sides.

It’s Ruby and Stan’s anniversary, and the two wax poetic about their dream celebration. Although they can’t afford to rent a Bentley and stay in a presidential suite, they know they deserve it. Instead, they settle on splitting the cost of a new hot water heater, which is slightly less romantic than balling out like the power couple they are.

While sitting around a diamond folding table in Beth’s empty abode, the women cut a plan to gain back Rio’s trust. They’ll earn a fair share of the money, with no skimming, then use the profits to hire a hitman and take Rio out. “It’s all I could come up with at 4 am on an air mattress,” Beth exclaims. She gets dolled up and meets up with Rio to chat. She asks him if they can “just go back,” and he says she has to earn that. “I’ll do anything,” she says, while he stares her down with his bedroom eyes. (Funny how his bedroom eyes look almost identical to his “I might murder you in your sleep tonight” eyes.) Rio knows she’s valuable, so he asks if she still has her minivan… 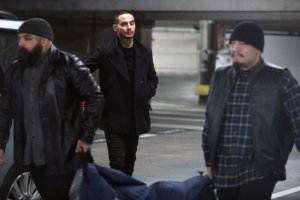 As the women sit near a field in the middle of nowhere, a man crawls out from a sewer grate behind them. He’s donned in orange, dripping with mud and… it’s Boomer! With Annie’s former boss in tow, they’re pulled over at a police stop; the cops are looking for a few guys who may have jumped a prison wall. It’s a tense moment as the officer peeks into the van, but the ex-prisoner is safely concealed in a hockey bag. When the coast is clear, Boomer says he was promised passage to Canada if he started a fire in the correctional facility, but he has one request: He wants to see Nana before he goes. Annie convinces the others to let him have one hour with Grams.

It turns out they’re a few days too late: Nana died in her sleep a week before. Boomer then wants the ladies to drive him to a lake to scatter her ashes, but Beth’s running out of time and patience. She threatens to chuck the ashes into a dumpster if he doesn’t get back in the hockey bag. “If we didn’t have enough reason to go to hell…,” quips Ruby.

The women drive to meet Rio, who then takes possession of the hockey bag. Beth’s crew is officially back on the payroll, but as for Boomer, Rio has different plans for him.

When Ruby gets home, Stan has prepped a karaoke machine along with lights and streamers, and the two get down to some Salt-N-Pepa. He gives her a brand new diamond ring, which she refuses. She thinks he’s in over his head with the private parties he works, but Stan is over trying to do the right thing. A screaming match shows us what we already knew: this marriage is still at odds.

After being pressured by Ben regarding his unprofessional relationship with his patient, Dr. Cohen realizes he shouldn’t be studying with Annie during their therapy appointments. To further her GED prep, he then introduces her to a tutor who also happens to be his girlfriend. The look of hurt is all over her face. Afterward, she takes Nana’s ashes to the lake, breaking down as she scatters them, then laugh-crying as a gust of wind blows them in her face.

In the closing montage, the ladies are back at work, printing cash and drinking booze. The product is looking primo, but as we admire their crisp bills, so does a new duo of agents. They know it’s from Detroit, and based on the chemicals used, they know it was made by a woman.

Will the women kill Rio by the end of the season, or will the new investigators take them all down before that happens? Drop your thoughts in the Comments below!