What is with American Idol and cliffhangers this season? After making us wait a whole week to learn of Dillon James’ fate, the show threw yet another curveball on Sunday, extending the battle for the Top 20 — and moving it to a totally new arena.

With only one spot remaining, the judges revealed that they can’t (and won’t!) choose between the two remaining contestants, Grace Leer and Lauren Mascitti. In the judges’ defense, both women are 28-year-old country powerhouses from Nashville, so comparisons are bound to be drawn. That said, I’m not really sure why they weren’t both sent through to the Top 20 over some of the previous contestants that the judges weren’t 100-percent certain about. And there were several of those.

Anyway, it’s now up to viewers to go online and vote for the performance they preferred — Grace’s killer rendition of “(You Make Me Feel Like) A Natural Woman,” or Lauren’s crowd-pleasing “Two More Bottles of Wine.” Again, I feel like both Grace and Lauren deserve to be in the Top 20 over some other contestants that were sent through before them, but if I must pick a side, my vote goes to Grace. Which singer gets yours?

OK, now that we’ve gotten that drama out of the way, let’s talk about the singers who will proceed to the Season 18 live shows (whenever those end up happening):

DILLON JAMES, 26 | I won’t even bother discussing Dillon making the Top 20; that result was a foregone conclusion, and it was ridiculous of Idol to build a cliffhanger around it. What I will discuss is how Dillon’s open shirt gave us our first real extended look at his full chest tattoo — a detailed depiction of Christ’s crucifixion — and it is a sight to behold. Happy Palm Sunday, everybody.

FRANKLIN BOONE, 27 | Just when I thought my love for this humble genius had reached its full capacity, he went and crushed John Mayer’s “Daughters” with his own baby girl in the audience. My only complaint is that I wanted to see more of his performance. A true musician, this one. Watch:

JULIA GARGANO, 21 | For some reason, I felt a wave of emotion wash over me before Julia even started singing — an inexplicable feeling that Katy Perry also appeared to experience. I was annoyed (again) that the show cut away from her performance right at the song’s apex, but she still gave us plenty to enjoy. The judges gushed over her classic sound, with Luke Bryan even naming her a frontrunner. Click here to watch.

ALIANA JESTER, 19 | Just when I thought I’d heard the last of “This Is Me” from The Greatest Showman, along came Aliana. Given her track record thus far, it wasn’t a surprise to see her sent through to the Top 20, though she’s someone I still feel like we haven’t gotten to know quite yet. Click here to watch. 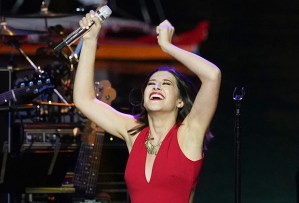 SOPHIA WACKERMAN, 20 | Not only did Sophia secure a spot in the Top 20, but Idol‘s new queen of hairography also earned a special place in my heart when she chose to perform the underrated Nick Jonas bop “Levels.” Seriously, why did she seem so surprised by her results? Click here to watch.

KIMMY GABRIELA, 17 | Kimmy exhibited such impressive control over her voice with a Demi Lovato ballad, she earned an actual chef’s kiss from Katy. That said, Katy worries that she still doesn’t know who Kimmy is as an artist, cautioning her to start thinking about “the whole package.” Click here to watch.

CYNIAH ELISE, 18 | Sure, Cyniah fumbled some of the lyrics to “Lady Marmalade,” but she still killed it up there. Frankly, she could call me by the wrong name and I would just accept that as my new identity.

MAKAYLA PHILLIPS, 17 | Since Luke named his personal frontrunner this week, I might as well name mine. Makayla is 100-percent the one to beat in this competition, which she proved with an insane performance of Demi Lovato’s “Sorry Not Sorry.” In fact, I’m sorry not sorry to say that she sounded better than Demi herself.

LAUREN SPENCER-SMITH, 16 | Major confidence is required to pull off an iconic song like Aretha Franklin’s “Respect,” and that’s exactly what the competition’s youngest remaining singer brought to the stage this week. She was proud of her performance, as she should be. Watch all Cyniah, Makayla and Lauren’s performances:

OLIVIA XIMINES, 17 | If Idol doesn’t work out for Olivia, she should head to Broadway and audition for TINA: The Tina Turner Musical. Everything about her performance of “Proud Mary” was on point, from the costume reveal to the exhausting choreography. And, of course, the vocals. I will say this, though — it’s adorably naive of Olivia to think the girls in her dance troupe kept her Idol journey secret. I’m sure everyone at her school knew she was there. Click here to watch.

ARTHUR GUNN, 21 | Prior to the dramatic cliffhanger, Sunday’s episode ended on a pretty chill note, as Arthur lulled the crowd with Bob Marley and the Wailers’ “Is This Love.” Even the judges were jamming along, later commending him for developing a palpable connection to the music this week. Katy thanked him for being a “pure light” in the world, and it’s hard to disagree. Click here to watch. 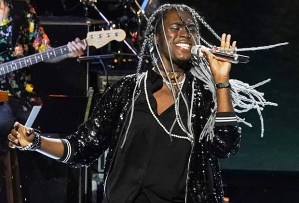 Unfortunately, not everyone made it to the Top 20… er, Top 21. We said goodbye to Genavieve Linkowski, whose performance of Lauren Daigle’s “You Say” was too safe for the judges’ liking; Robert Taylor is still “all over the map” and lacks focus; Demi Rae let her emotions and nerves get the better of her; and Shannon Gibbons… Honestly, I don’t know what to say about Shannon. She crushed Adele’s “Send My Love (To Your New Lover),” and I figured she was a shoe-in for advancement.

Your thoughts on Idol‘s never-ending journey to the Top 20? Vote for your favorite remaining singers below, then drop a comment with your reaction to this week’s eliminations.