Thursday’s Station 19 dished out a couple of meals that were stressful enough to give even viewers indigestion and, for dessert, served up what might have been the most backhanded proposal of all time. Read on, and we’ll go over the menus from soup to nuts. 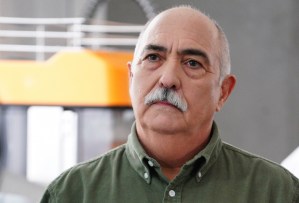 ‘VACATIONS ARE SO STRESSFUL’ | While, as Travis called her, “poor, broken Maya” struggled to relax on her vacation with Carina, a nervous Sullivan and Andy sat down to lunch with her father, who immediately assumed that they’d eloped. Uh, no, Andy said. But they were dating. And in love, Sullivan added. “What’s that got to do with me?” Pruitt grumbled. The couple wanted to do him the courtesy of informing him before they reported their relationship to Dixon and Sullivan requested a transfer to another battalion. Wait, what? Andy said. This was the first she’d heard about that part. But they’d work it out, she was sure. When Sullivan excused himself to use the restroom, he overheard the chef calling ICE on a line cook who’d burned a steak. Sullivan said he hoped the guy hadn’t really done that, because if he had, and had an undocumented immigrant on staff, he’d face penalties — on top of being shut down for the fire hazards at which the battalion chief was staring.

Upon returning to the table, Sullivan was as shocked as Andy to hear her father defending ICE agents as honorable government employees just doing their jobs. “Like Nazis did their jobs,” Sullivan said. And he knew of whence he spoke — to his horror, he’d discovered at age 12 that his own grandfather had been a Nazi, and an unapologetic one. “He said,” Robert recalled, “sometimes a nation in crisis needs the patriot who does the unspeakable.” Yikes. Sullivan then pointed out that people don’t think it could happen here… when it is happening here. Right on cue, ICE arrived. Rather than let the line cook be hauled away, Sullivan and Andy took control of the scene — there’d been a fire when the steak had burned, so it was a Seattle FD matter. In fact, the line cook had been injured in the fire… yeah, that’s the ticket. Soon, even Pruitt had gotten involved and helped all of the undocumented kitchen workers, save for the line cook, leave the restaurant. 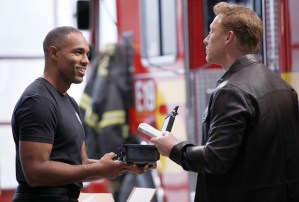 ‘CAN YOU TRAIN HIM TO BE LESS OF A DUDE?’ | Back at the station, Travis stopped by just to pick up his headphones and wound up being roped into having lunch with Dixon, Emmett and his longtime girlfriend Alicia, who was as sweet as she was clueless. As if it wasn’t awkward enough that Dixon expected Travis to help the inept probie add stripes to his uniform in a matter of months, Alicia cornered her new gay best friend to ask whether she should just propose to Emmett herself. In response, Travis told her that if she married Emmett, she’d be signing up for “a lifetime of heartbreak” — in more ways than one, he refrained from adding. She wouldn’t necessarily get to grow old with Emmett — firefighters don’t always get to grow old. And he would know — he’d lost his firefighter husband. In the end, she hugged her boyfriend’s booty call and thanked him for promising to look after Emmett. Uncomfortable to the nth.

While all this was going on, Ben met with former Grey Sloan colleagues in hopes of picking one to run the PRT with him. Owen was quickly scratched off the list. Teddy was too sleep-deprived as a new mom to consider it, she said. But Jackson had real potential. When he and Ben reported to the restaurant to treat the line cook’s “burn,” Avery immediately got the gist of the situation and helped get the “patient” to safety. Sure, he hadn’t actually done anything medical, but “we saved his life, his family,” he pointed out to Ben. “That’s a pretty good day for a doctor.” Meanwhile, Jack, bored with his roommate who was never around, hung out at Dean and Vic’s, and proved to be a natural with Pru. Bro, you’re not making her laugh, Dean insisted. “You’re making my daughter fart in her sleep.” What, like that isn’t a skill, too? Also of note: It wasn’t lost on Dean how much of the episode Vic spent wearing a towel. Yep, it’s just a matter of time for those crazy kids.

‘THIS IS NOT DISNEYLAND’ | As the episode drew to a close, Sullivan, leaving the restaurant with Andy, mentioned to his girlfriend that it had been his idea for Ripley to ask Vic to marry him — if they’d tied the knot, they would’ve kept their jobs titles, everything. Plus, “it might be nice for your dad to get to see that.” Sly, Sullivan. Very sly way of asking Andy to marry you without saying “will,” “you,” “marry” or “me”! At the station, Travis didn’t want to hear Emmett’s apology for the lunch from hell. Don’t be sorry to him, he spat, “be sorry to that lovely girl you’re destroying.” (Uh, nobody’s making you keep sleeping with Emmett, Travis.) As all of the firefighters responded to a five-alarm call, even Vic (still in that towel!), Dean felt the weight of new fatherhood and volunteered to stay behind to man the desk. Maya, too far away to be of any help, began to hyperventilate. And at the scene of the blaze, Jackson, still riding shotgun with Ben, crossed paths anew with recent ex Vic.

So, what did you think of “No Days Off”? Will we get a wedding this season? Will the probie survive? And what did you make of that look between Jackson and Vic? Are you, as I am, worried that he’ll be an obstacle to Dean/Vic?