Pauley Perrette is back on CBS in the new sitcom Broke, trading in her white lab coat for a Guns N’ Roses T-shirt as a blue-collar single mom whose life is turned upside down by the arrival of her (formerly) wealthy sister.

Perrette stars as Jackie, who’s facing some money woes of her own: Her microwave is on the fritz, so she warms up her son Sammy’s oatmeal with a propane torch. She gets a surprise visit from her glamorous sister Elizabeth (Another Period‘s Natasha Leggero) and Elizabeth’s husband Javier (Jane the Virgin‘s Jaime Camil) — or, as Sammy calls them, “Aunt Hoity and Uncle Toity.” Elizabeth has adopted a prissy British accent, and Javier’s loyal assistant Luis (Telenovela‘s Izzy Diaz) is in tow, but we soon learn they’re not just dropping by: Elizabeth privately sobs to Javier that they’re too good to go broke, after Javier’s uber rich dad abruptly cut them off. 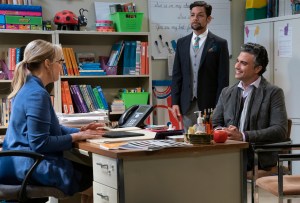 Javier promises to email his dad to get them more money, and even volunteers to take Sammy to school so Jackie and Elizabeth have more time to catch up. He takes Jackie’s place at a parent-teacher conference, charming the socks off of Sammy’s teacher and convincing her that Sammy’s animated videos, which the teacher considers a distraction, are actually the work of a budding genius. Meanwhile, Elizabeth accompanies Jackie to the bar where she works, and the sisters take turns hinting about their financial troubles before Elizabeth finally confesses: They blew through all of Javier’s trust fund, and they need to move in with Jackie for a while. Their bickering devolves into a physical fight, with the sisters tossing ice cubes and paper towels at each other in disgust. 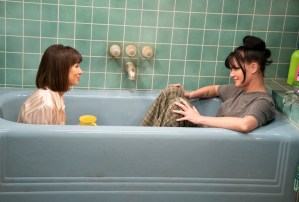 By the time Jackie and Elizabeth get home, they’re not speaking to each other — but at least Javier and Sammy are bonding. Luis fetches Jackie a “tea” that’s mostly whiskey and assures her that Javier is a good person: “His heart, there is none bigger.” She climbs into an empty bathtub with Elizabeth for a heartfelt “tub talk,” with Elizabeth apologizing for lording her wealth over Jackie in the past. Jackie’s still a little wary of them moving in, but Javier’s dad informs him via email that he won’t be sending any more money for at least a year… and Sammy shows them an animated video he made for class about how happy he is with his new family: “Now the house is loud and busy and fun again. And I hope it stays that way.” (Aw.)

Jackie agrees to let Elizabeth and Javier (and Luis) stay with them for now… just as a cute chihuahua named Bijou pops out of Elizabeth’s purse. Hey, the more, the merrier, right?

Grade the Broke series premiere in our poll below, and then hit the comments to share your first impressions.