Warning: The following contains major spoilers for The Magicians’ series finale. Proceed at your own risk!

The Magicians cast its final spell during Wednesday’s series finale, and it was a doozy: Using the world seed, Alice, Margo, Josh and Fen were able to create Fillory 2.0 (complete with a field of bacon!). But there was a complication: The quartet were unwillingly transported to the new land, with no way of returning, leaving their friends back home confused by their mysterious vanishing. Having lost the people nearest to him, Eliot became a professor at Brakebills — and found comfort in Charlton’s kiss! Meanwhile, Julia, Penny and newborn baby Hope Quentin (or HQ, as dad called her) set off traveling in search of their friends.

Then, in the final scene, new High King Margo prepared to release Fillory’s residents from the globe housing them. “You guys know our lives are about to get even weirder in some insane way that we can’t possibly predict,” Margo mused. But the others found comfort in that idea. “That’s how I know it’s our story,” Alice added, as Margo gleefully pressed the button on the globe and… cut to black!

Below, co-showrunners Sera Gamble, John McNamara and Henry Alonso Myers talk about the characters’ fates, what they would have changed about the finale if the series had been renewed and what they wanted to explore in a hypothetical Season 6.

TVLINE | I want to rewind to when you were first crafting the finale. What was your approach to it? And what did you know about the show’s future at that point?
SERA GAMBLE | We knew we were on the bubble. We knew that this might be our last episode. We’d hoped it might not be, but we knew there was a good chance it was, so we wrote an episode we felt could function both ways. And we tended towards scenes that would feel like they were series finale scenes, knowing that we would cut some of it in post if we were going to go on. So, really, what we did was write the most complete version [of the finale]. This is just the first time we’ve done that, and it turned out to be the series finale.
HENRY ALONSO MYERS | The only thing that is really different about what we did this year was, usually, at the end of every season, we flip the table over and pick up the pieces in the beginning of the next season. And the one thing that added on top of that was, in looking back at the series, we made an effort to really resolve some of the strong character stories that we’ve been building up for all the time that we’ve been working on the show. And while we did not resolve the plot, we felt like that left us in a position to have stories to tell. As a result of wrapping up the character stories, we felt like it’ll feel a lot like our people have achieved something. And while their lives will continue, as regular, real-life lives do, this journey that they’ve gone through over the last five years was not for naught. They actually came to a place and learned something about themselves. 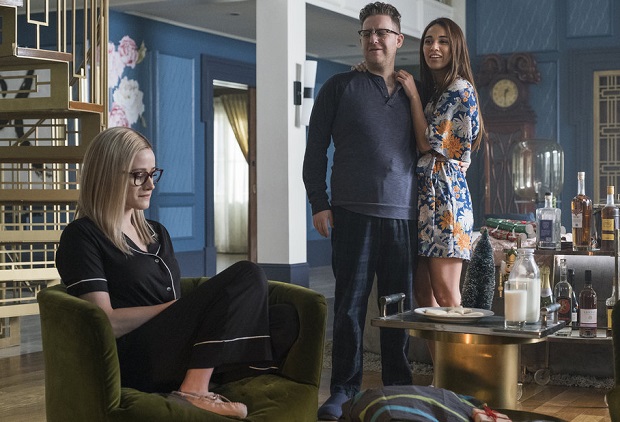 TVLINE | Sera, it’s interesting that you say that there were scenes that you would have cut if the show had continued. What were some of the things that you would have pulled back?
GAMBLE | I don’t know if it’s so much complete scenes. It’s more as we were getting notes from the writers on the episode, they were pointing out to us things that felt like they provided closure, or that felt, dare I say, more optimistic than our season finales usually are. [Laughs] We kept saying, “We’ll have to look at it in post, and we’ll know more about our situation then.”

TVLINE | Looking back on the finale now, knowing it’s the final episode of the series, is there anything you wish you had done differently?
JOHN McNAMARA | Yeah, I think we could have used one more musical number. [Gamble laughs]
MYERS | I don’t disagree with that. [All laugh] I wish we had time for that. I always wish that we had spent more money, although I feel pretty proud that we didn’t leave anything on the table.
McNAMARA | We cleaned up the money cupboard pretty well!
MYERS | As much as we could. We didn’t want to destroy [Fillory] in the finale and have it look cheap.

TVLINE | The finale does have a great sense of closure, and you do get a sense that this story has reached its end. But you can also see where it would be headed if there was a Season 6. What would you have liked to explore, storyline-wise or idea-wise, in a Season 6?
GAMBLE | I will tell you we had had those conversations. I feel like we definitely evoke more story and more plot. When you see where the characters are at the end of the episode, you can imagine where the story might go next. But I feel like, since this is our series finale, we should leave it at that and let the audience take from it what they want to take from it and imagine what they want to imagine. I feel like it’s now out of our hands and in the minds and imaginations of the people who are watching it. Do you disagree, gentlemen?
MYERS | I wholeheartedly agree, which isn’t to say that we didn’t have a plan. But I do think that that’s absolutely right. One of my favorite finales that I’ve seen was the finale for Angel, and one of the things I loved about it is this feeling like the world that they lived in would continue to fight, but they didn’t tell us how, and I kind of feel that way about The Magicians. I feel like the people that watch our show have this relationship with all of the characters in our show, and I feel like rather than tell them where it goes, I would love for them to imagine it. We have a version that we would have done, but I think that matters less than the possibilities that everything that we finished shooting suggests.

TVLINE | The final scene of a finale is so crucial. What did you want the significance to be of that final moment with the gang in Fillory and those final words that Alice utters?
MYERS | Sera and I passed that scene back and forth a bunch of times. The thing that I feel like she kept pushing to get in there, which I thought was really smart, was this feeling that these people were nervous and excited, but so happy to be together. That they’d come to a place where things were terrible, but it was always terrible, and that they finally recognized that, “well, yes, it’s terrible, but at least we have each other.” The thing where we got completely lucky was the last little look that Summer [Bishil as Margo] gives, which is just delightful and kind of encapsulates the entire series of The Magicians, as she presses this button that makes everything terrible. [Laughs] 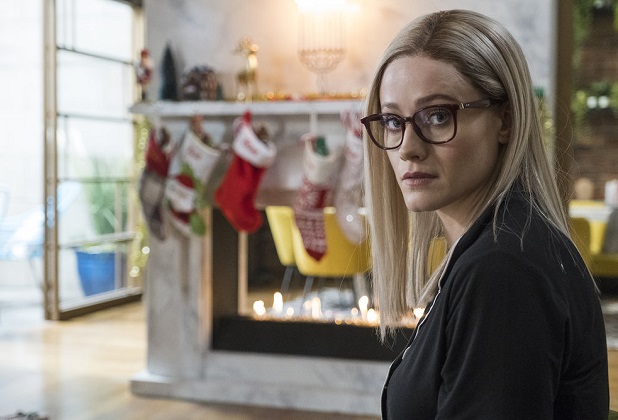 TVLINE | I actually, for a moment, thought that maybe Alice might take on more of a leadership role in this new Fillory. Was there any debate about who should be High King?
GAMBLE | Not really. I think it’s clear that there’s more than one way to be a leader. There’s plenty for everyone to do, there’s plenty of work to go around. Neither of the Pennys has ever been King on this show, but it would be hard to argue that he hasn’t, at times, really stepped up and been a leader. With Alice, selfishly as fans of the character and fans of the show, we wanted her to be a master magician by the time we were done telling the story. So for us, that really important moment for her in the episode is when Zelda looks her in the eye and tells her that she can be one, and she can be one now. That really affects everything that she does from then on.
MYERS | Alice’s arc this whole season is to live through her grief, and the thing that I love about where she ends is she has a realization that grief is not something you move past. The grief is you. It’s something that you have to learn to live with, and it becomes a part of you. And in the end, the story is about her accepting that broken piece of herself, and in accepting it, she finds her true power. That’s as perfect an arc for a character over five seasons as I can imagine.

TVLINE | Are we to assume that Penny and Julia and baby Hope are traveling to this new Fillory?
GAMBLE | They’re looking for it. Everyone’s trying to find each other, and if you listen closely at the beginning of that scene, they have a number of places that they want to look, some of which have been supplied by Brakebills’ new professor, Eliot Waugh. What we wanted to do was give you the general idea that this is the next quest: for our people to find each other. 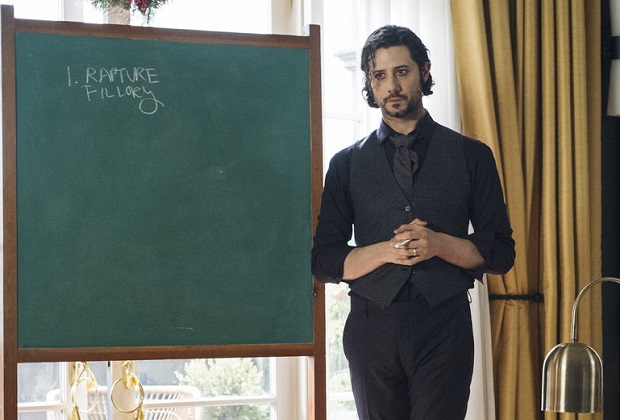 TVLINE | Can you talk about Eliot becoming a teacher and possibly finding the perfect person in Charlton?
GAMBLE | All of us talked a lot about where our characters began when we first met them in Season 1. We had that in mind all season, in addition to the more immediate arc that everyone went through that was very much about grief and learning how to continue in your life after a deep loss. But when you meet Eliot in Season 1, he’s certainly charming. There’s pretty much no one who doesn’t want to hang out with him all the time, but there’s also something very guarded about him. Over time, we’ve seen the ways that he is afraid to pursue what would really make him happy, and that this has always been really complicated for him. But we wanted to see what he has learned over all this time. He’s learned a lot of lessons the hard way over the course of the show. We kind of always had this in mind as a possibility for him and Charlton. We talked about it when we cast the character, God, a couple years ago now, that we knew that they would be stuck inside of Eliot’s mind together, and we thought that that was kind of an interesting way to meet someone — a very intimate, very deep look at someone, living inside their own mind. We wanted to just invoke the possibility of really what Eliot is capable of now inviting into his life, what he’s ready for, what he’s ready to let go of that hasn’t been serving him, the way that he has been unkind to himself that he’s outgrown now, and now he can be kinder and more open for himself.

Magicians fans, what did you think of the series ender? Grade it below, then hit the comments!