The Voice’s coaches love to act like settling on the winner of a Battle is the equivalent of Sophie’s Choice. But sitting on our couches at home, it always seems pretty easy, no? We can pick the better of two singers in the time it takes us to wish we hadn’t thought a half-glass of wine was gonna hold us till the next commercial break. I can prove it, too — read on, and we’ll pick the victors, or at least the contestants who should’ve been the victors, in Monday’s Night 2 of Season 18’s Battles.

Team Blake: Toneisha Harris (Grade: B) defeated Jacob Daniel Murphy (Grade: C) on “Good as Hell” | “What the hell was that?!?” exclaimed Blake after he heard his team members run through Lizzo’s hit in rehearsal. “A duet that wasn’t gelling,” I replied to the TV. And it didn’t seem likely to get a whole lot better after Blake and advisor Bebe Rexha instructed Jacob to start using the falsetto that he wasn’t super comfy with. On stage, the twosome had so much fun that it would’ve been hard, maybe even impossible, not to have fun with ’em. Competition-wise, though, the Battle belonged to Toneisha. Lizzo’s hit wasn’t the best showcase for the power of her pipes, yet she still managed to sound, ahem, good as hell. When Jacob was in his vocal comfort zone, he was fine; he had what the coaches love to call a nice tone. Trouble was, he often left his comfort zone to go for that damn falsetto, making me wince every time. That was never gonna beat a singer who was so kickass that her coach went to the trouble of trying to decide whether she was phenomenal, a phenomenon or a phenom. 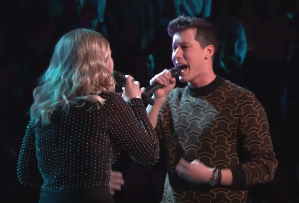 Team Kelly: Micah Iverson (Grade: B+) defeated Gigi Hess (Grade: B-) on “Someone You Loved” | “Gigi and Micah should date!” declared Kelly after seeing the way the duo ignored her and advisor Dua Lipa as they sang Lewis Capaldi’s ballad to one another. And they certainly did make beautiful music together, so to speak. Before the session wrapped, Gigi admitted that, having once weighed 300 lbs., she still struggled with her confidence; later, Micah told us that he was feeling insecure, too, having noticed how much better at runs his teammate was. Beneath the spotlight, Gigi bumped into a pitch issue right out of the gate — who the hell left that there? — but rebounded quickly. She and Micah sounded as terrific together when it counted as they had when they were just practicing (although I did kinda miss the sweeter, gentler quality of their run-through). For my money, this was Micah’s win; he was rock-solid throughout — in the moment and in the pocket. Then again, as John noted, the song was so right for Micah’s voice, it could’ve been written for him.

Team Legend: Mandi Castillo (Grade: B-) defeated CammWess (Grade: B) on “Seniorita” — CammWess stolen by Kelly | As the teammates entered the rehearsal room, their coach acknowledged that they were probably the two most different singers that he’d paired. I didn’t have high hopes for CammWess, seeing as the only thing I could recall about him from the Blinds was that the coaches tried to sing him “Happy Birthday” — and forgot his name. After the duo’s first run-through, their tentativeness with one another became a big issue. John and advisor Ella Mai reminded the twosome that Shawn Mendes and Camila Cabello’s hit was, you know, hot. But “it’s too sexy,” said Mandi; she’d just met CammWess, for Pete’s sake. Post-rehearsal, they worked overtime — and no, that’s not a coy euphemism — to surprise their coach with how high they’d managed to turn up the heat. And how high was that? Um, they reached about the same temperature I eat my soup at — tepid. Mandi sounded OK but seemed especially reluctant to interact too much with her partner. CammWess, on the other hand, not only set his bedroom eyes on “come-hither,” he sang with a seductive swagger and a tone that was so rich, it could’ve been drizzled over ice cream. I could only guess that John stuck with Mandi over CammWess to keep Kelly from stealing her “musical crush.” 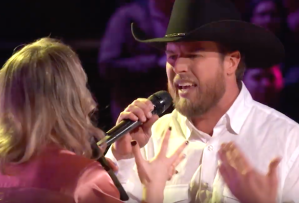 Team Blake: Cam Spinks (Grade: B) defeated Kailey Abel (Grade: B) on “What Ifs” | Hmm… I suspected it didn’t matter what happened during this Battle, because with country singers being so few and far between this season, Blake wasn’t going to let go of Cam for anything. That said, man, did Cam struggle. Bebe Rexha went so far as to physically shake him to try to get him to relax. The guy looked as anxious as I feel every time I think about, “Um, what’s gonna happen when The Voice runs out of pre-taped episodes?” When he and Kailey hit the stage, I could almost hear them cursing Blake in their heads for sticking them with the Kane Brown/Lauren Alaina song that wasn’t quite right for either of them. That said, they got pretty good as they picked up steam over the course of the number. Kailey got to rip out that fantastic growl of hers, which would’ve put her right over the top, had Cam not roared right back, spitting gravel like a pickup tearing down a back road. When they were done, I’d have picked Kailey for the victory. A modern-day Bonnie Tyler, she seemed a hundred times more comfortable than Cam. But I couldn’t fault Blake for going with his country boy. His vocal was strong, and his dubious stage presence wasn’t necessarily going to be a hindrance; just ask Jake Hoot — winners needn’t be showmen.

Team Nick: Tate Brusa (Grade: B+) defeated Anders Drerup (Grade: C+) on “Circles” | I thought this odd couple sounded pretty good in rehearsal, but the Jonas Brothers felt that their duet was “disjointed.” If only I could’ve told ’em, “Guys, we’ve heard worse. Just tonight, even.” After Tate got advice on dealing with his changing voice and the difference his posture could make when singing, he hit the stage ready to kick some rasp; from the first note, he was on, demonstrating better control than I’d remembered from the Blinds. There was no way Nick was going to dump him for Anders, a decent singer but one who’s more memorable for his quirkiness than his vocals. Hilariously, the coaches agreed that the teammates should probably never sing together again. Anytime they tried to sync up for a few lines, it became what Kelly called “a little chaotic.” Yeah, chuckled John, “you should not go on the road as a traveling duo.”

Team Legend: Darious Lyles (Grade: A-) defeated Nelson Cade III (Grade: B+) on “Come Together” — Nelson saved by John | After everyone remarked on one another’s jackets, Darious “leaned into” the Beatles’ classic the same way I do a pint of ice cream — wholly and enthusiastically. For his part, Nelson unleashed a vocal that was so spectacularly shredded and raspy, it was like the sonic equivalent of a Brillo pad. Which I mean as a compliment, to be clear. There was definitely going to be a Steal or a Save going down after this performance. (And OK, it was the last one of the night — that didn’t hurt the odds of neither singer going home, either.) On stage, Darious hurled notes like he was throwing fireballs. Nelson responded by scratching his vocal across the song so hard, it could’ve drawn blood. I didn’t necessarily love the way the guys sounded together — it was, what would Kelly call it? “chaotic” — but separately, they were super. This actually was a tough call. I’d probably have gone with Nelson, even though I thought Darious slightly outsang him. Nelson, it seemed, could fit in neatly in a greater variety of genres than his teammate. But there was no wrong answer to this one — they were both impressive. (Wonder if John had a strategy about sending Nelson to the four-way Knockout over Darious — like maybe Nelson has a bigger social-media following?)