An avalanche of rash decisions led to bloodshed this week on Homeland — and might’ve driven a permanent wedge between Carrie and Saul.

Haqqani gets hauled out of his prison cell and put in front of a firing squad, but his life is spared when Hayes makes an emergency call to G’ulom, informing him that Max is being held hostage by Haqqani’s son Jalal, and will be killed if Haqqani dies. While Carrie and Yevgeny wait outside where Max is being held, Saul heads into an emergency video briefing with Hayes, where a CIA official tells Hayes their plan is to send in a small special ops group at night to rescue Max… but the odds are “at best, 50-50.” Hayes storms out fuming, and Zabel follows quickly behind, reminding him that America doesn’t negotiate with terrorists, and that a failed rescue would be much worse than just losing Max. 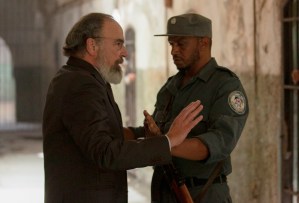 Saul visits Haqqani in his cell, but soon Haqqani is yanked out again and placed back in front of the firing squad. Saul angrily confronts G’ulom, but the Afghan VP tells him to take it up with Hayes. The gunmen shoot Haqqani several times in the chest, and miraculously, he’s able to struggle back to his feet. They reload and shoot him again, this time fatally. And that’s bad news for Max: Carrie and Yevgeny spot his captors piling into trucks as news of Haqqani’s death goes viral… and Jalal shoots Max three times before he and the others drive off. Carrie screams and sprints down to Max, checking his pulse. But it’s too late. He’s dead.

Carrie calls Saul and unloads on him, blaming him for not protecting Max: “I told you where he was. You did nothing.” Yevgeny helps her take Max’s body back inside to wait for someone to pick it up. There, he tenderly asks her who Max was, and Carrie launches into an impromptu eulogy, saying that Max “would do anything for me. Absolutely anything.” But she realizes now that she took him for granted, “and now he’s dead,” apologizing to his dead body through sobs. Oh, and Jalal drives to a Pakistani town and interrupts a rally by local Taliban leaders, crowing that he was the one who shot down the President’s helicopter and even brandishing the rocket launcher that did it. 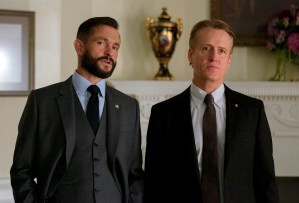 Back in D.C., Wellington spots an aggressively hardline speech on Zabel’s desk, and the two bicker about how the President should approach this. Hayes orders them to come up with a speech they can both agree on, and Zabel reluctantly complies — but then he calls a lady friend of his and asks her to dig up some “kompromat” on Wellington and Saul to get them to back down. She gets back to him with… Saudi intelligence video of Jalal confessing to shooting down the helicopter. She warns him it’s unverified, but his eyes light up, and he rushes to Hayes with the news and hands him a freshly rewritten speech.

Hayes addresses the nation, pointing to Jalal as the President’s killer and urging Pakistan to help the U.S. apprehend him. Wellington tells Zabel he’s “pushing us into a war we don’t want and can’t win,” but that particular horse is way out of the barn at this point. And when Saul arrives with some troops to pick up Max’s body, Carrie tells him she has a lead on finding the President’s flight recorder. But the troops want to search Carrie and put her in handcuffs, and she freaks out, pulling a gun on them. Saul stands in the way, but Carrie turns on him, calling him a liar and sprinting away to join Yevgeny instead. She and Saul exchange significant looks as Saul’s copter takes off, and Carrie drives off with Yevgeny — and tells him about the flight recorder: “I know where it is.”