It’s one step forward and three steps back for Beth, Ruby and Annie on Good Girls, and in Sunday’s episode, Max certainly doesn’t help their cause. The women are lucky to be alive after Beth’s attempted murder of their mob boss, but to wheel-and-deal him so soon after? That’s one risky play. Let’s see how it all pans out.

As we saw last week, Beth is skimming 10 percent off the top of Rio’s cash. Ruby thinks it’s a dangerous ploy, but Beth is tired of Rio calling the shots. After all, he stole from them first, she reasons. He’s just way scarier and, you know, armed and dangerous.

We check in with Max, who’s going all Beautiful Mind, trying to track the mystery behind Lucy’s disappearance. Dead center on his bulletin board is a note that reads: “Mrs. Boland.” (Though, I’m not sure what asteroids, a satellite launch and a plane crash have to do with it, but he wrote those down, too.) Based on the state of his house, the destroyed look on his face and the handgun he now possesses, it doesn’t look like Max is in a good place.

Stan gets a wad of cash from Krystal for working a private party with her. He’s shocked she’s pulling in that much dough until he witnesses a screaming match she gets into with a rich guy who accuses her of emptying his wife’s jewelry box.  Shady, indeed, but at least she’s sharing the (stolen) profits?

The ladies meet with Max to clear up a few things, but he’s got his gun inside a paper bag, demanding to know where Lucy is. Beth tells him about Rio and the van. “What do we do about this guy?” he asks, but of course, the women don’t have an answer. Max doesn’t want to go to the cops; he wants to kill him. “I’ve got nothing left to lose,” he says. Poor guy. Max then mentions a cousin who’s a former Navy SEAL and can do the job for $30k. Uh, I guess it’s nice to have options?

At the next cash hand-off, Rio tells the women he feels they’re robbing him blind. Beth plays it cool, but Rio is adamant: He doesn’t trust his partners. How much longer can Beth get away with this? 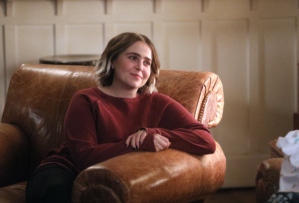 The trio then goes to see JT at the loan office. Annie spills that the money’s for a hit man hire, which ruins their chances of getting the advance. Annie then suggests they rob her convenience store, but Beth and Ruby want no part of it. JT, however, is intrigued by how easy she says it would be (“Lionel Richie-easy!”), so he’s all in.

The job takes longer than it’s supposed to, and when Beth and Ruby go inside to investigate, another man is holding JT at gunpoint. He asks the women to call the cops, but after Beth claims to have no service, JT takes off running and the man accidentally shoots Ruby in the knee. Annie wraps up the leg with a tourniquet, sponges, ice scrapers, and other convenience store odds and ends. It looks super janky, as if the leg is wrapped in literal garbage and cellophane, but according to a paramedic, Annie saved the leg and maybe even Ruby’s life. And you know what? Annie really needed a win!

Ruby and the women then go to Plan B: They decide to let “tampon boy” take his shot at Rio, but the kid can barely hold his gun, let alone fire it. Beth takes him to school, and after a bit of practice, Max gets in touch with his inner Rambo, dainty earmuffs and all.

Beth introduces Max to Rio as “her ink guy,” but all of that John Nash/Sylvester Stallone realness goes up in smoke. Instead, he apologizes for raising his (non-existent) ink prices, screwing Beth over in the process. Even after she eggs him on, Max can’t muster up the chutzpah. “It wouldn’t have made you feel better,” she tells him afterward. “It just makes you feel nothing.”

When the Boland family returns home later that night, they find that every single item in their house has been hijacked. On the counter is a note for “Elizabeth.” It reads: “Don’t ever steal from me again.”

Will the ladies ever get a leg up on Rio? And am I the only one who wants to see more of JT? Tell us your thoughts in the comments below!