American Idol began finalizing its Top 20 on Sunday, sending eight hopefuls through to the live shows — and leaving one fan-favorite singer’s fate hanging in the balance.

Let’s start with that cliffhanger: 26-year-old Dillon James, easily one of the more #blessed contestants to grace the Idol stage, charmed the audience with an authentic rendition of Bob Dylan’s “The Times They Are A-Changin’.” It was hard to get a read on what the judges thought of Dillon’s performance, with Katy Perry offering a single vague critique about wanting him to tap into the emotional side of his voice more. Check out his Showcase performance below:

Sadly, we’ll have to wait another week to find out whether Dillon makes it through to the Top 20; his fate will be revealed along with the remaining 25 singers still awaiting their Final Judgment results. In the meantime, let’s break down the eight singers who will be singing for America’s vote — you know, whenever this whole “coronavirus pandemic” decides to clear up.

NICK MERICO, 24 | There was nothing especially amazing about Merico’s performance of “When I Was Your Man,” but let’s be honest, this kid was destined for the Top 20 from the moment he entered — sorry, make that re-entered — the audition room. And I’m glad that he and Lionel Richie have put their faux feud to rest so we can just focus on the music. That said, I had to laugh to myself when Merico mentioned that his mom is a big fan of Bruno Mars. Duh, of course she is. She’s a mom. Click here to watch.

DEWAYNE CROCKER JR., 23 | The judges lauded Crocker’s decision to put a reggae twist on Lil Nas X’s “Old Town Road,” almost as much as they loved his family. Now I hope the live episodes end up happening just so Crocker’s great grandmother has an excuse to get all dressed up! Click here to watch. 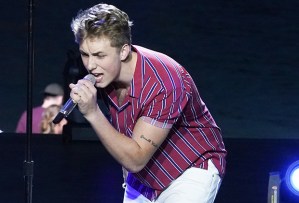 LOUIS KNIGHT, 19 | Though Louis’ delivery of Ed Sheeran’s “Castle on the Hill” was better during the actual Showcase than it was in rehearsal, the judges agreed that it wasn’t his best performance. Still, as Katy explained, they like to roll the dice from time to time — and that’s what they’re doing by sending Louis through to the Top 20. (He may not have delivered this time, but he’s always been a shoe-in, even if he didn’t bother wearing any tonight.) Click here to watch.

FRANCISCO MARTIN, 19 | No doubt about it, this was a star-making performance for Martin. He shed every last ounce of his shyness for a killer rendition of Harry Styles’ “Falling,” which he began by apologizing to everyone he lost touch with while he was going through “a lot.” (Why are some of these contestants so vague about their backstories?) Anyway, the judges clearly agreed with me, because they were thrilled to send him through to the Top 20. Click here to watch.

JOVIN WEBB, 29 | Jovin is the kind of guy you can’t help but root for — and he makes that even easier by delivering polished performances, like this take on Ray LaMontagne’s “You Are the Best Thing.” On top of his talent and charm, Jovin remains impressively humble for a guy who can get a crowd that excited. Click here to watch. 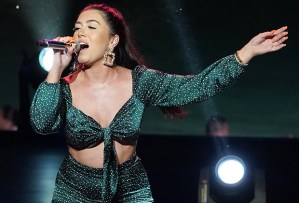 FAITH BECNEL, 20 | Not only did Faith choose the perfect song for her Showcase performance — Rufus and Chaka Khan’s “Ain’t Nobody” — but she was totally in her element throughout. She feels like one of the more professional contestants this season, which has benefited her to this point, though I’m having a hard time getting a sense of who she is as an artist. Click here to watch.

JUST SAM, 21 | The official word of the week is “metamorphosis,” and it applies to no contestant better than Just Sam. I try not to invoke the O-word too often, but I’m truly obsessed with every aspect of this performance. The bold song choice (Selena’s “Como La Flor”), the elegant transformation and, of course, the solid vocals. For someone I’ve never met, I’m oddly proud of Just Sam, and I can’t wait to see what the future holds for her. Watch her incredible performance below:

JONNY WEST, 23 | Margie Mays has always been by her boyfriend’s side throughout this competition, but he was forced to stand on his own two feet this week — and he soared. He performed The Fray’s “You Found Me” like he wrote the song himself, as Margie imploded with excitement from the audience. Click here to watch.

Unfortunately, not every contestant received good news this week. Even a few of my personal favorites were unexpectedly given the boot after what I thought were pretty decent Showcase performances.

* Makayla Brownlee, 17, knew she was taking a risk by changing up the rendition of Ingrid Andress’ “More Hearts Than Mine.” But if she knew it would be her undoing, she might not have taken such drastic measures.

* God has a plan for Camryn Leigh-Smith, 16, but that plan does not include a spot in American Idol‘s Top 20. Her performance of Tasha Cobbs’ “Break Every Chain” was deemed too “safe” for this stage of the competition.

* Devon Alexander, 23, ended Demi Lovato’s “Tell Me You Love Me” on a high note, but the rest of his performance was a hair underwhelming for the judges’ taste.

* Given his smooth, confident rendition of Childish Cambino’s “Redbone,” I was a little surprised to see Jordan Jones, 26, get the boot this week. But that just goes to show how stiff the competition is becoming.

* Unfortunately, Bruno Mars didn’t work as well for Geena, 27, whose performance of “Finesse” wasn’t enough to earn her a spot in the Top 20.

* I was most gutted to say goodbye to Amber Fiedler, 23, whose performance of Lake Street Dive’s “Good Kisser” was (I thought) pretty good, albeit a bit schmaltzy. After everything she’s been through, this just didn’t feel like a fitting end to her journey.

Time to weigh in: How did your favorites fare on Sunday? Which elimination hurt you the most? And do you think Dillon will be sent through to the Top 20? Drop a comment with your thoughts below.