Brita might want to change her name to Bitter after Friday’s episode of RuPaul’s Drag Race, which ended with a particularly nasty vocal assault against Season 12 dark horse Aiden Zhane.

Though several queens expressed their surprise at Aiden’s success — Jackie Cox, for example, admitted that she didn’t expect Aiden to end up in the top — Brita pulled out the big guns when she called out Aiden as the next queen who should be sent packing.

“I’m just shook that I’m in the bottom again when I’m serving looks every single time, compared to other people,” she said during Untucked. “It sucks to be up there with your sisters and have to say who should go home when you think that someone else in this room who is safe should be going home instead.” When asked for a name, she gave Aiden’s without hesitation.

Brita continued, “When I came into this competition, I said I was not going to compare myself to anybody because I’m only in a competition with myself. I’m working so hard, and I’m really giving everything that I have to do this, and I don’t think that Aiden should have been safe.” She then picked apart Aiden’s two acting challenges, claiming that she had to be carried every step of the way, before once again complaining that Aiden had time to squeeze in a nap after finishing her looks early last week.

Nicky Doll — who was sent home this week, and rightfully so — also chimed in, saying, “When I see you sleeping for two hours when I’m working my ass off on an outfit, of course I’m going to be mad!” 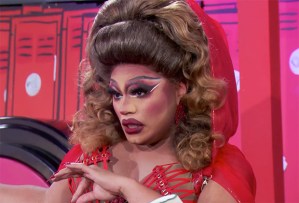 I’m no therapist, but for someone who claims she isn’t comparing herself to other queens, Brita sure loves doing exactly that. As for Nicky, her looks weren’t what landed her in the bottom. If she still doesn’t understand that, even though she’s had it explained to her countless times, I’ve got nothing.

Fortunately, Aiden surprised everyone by sticking up for herself in the midst of the onslaught: “Can I say one thing to get this out of the way for the rest of the f–ing season? From day f–ing one of this competition, I have had pretty much everybody in this place coming for me. I was the first to be picked out with [Heidi N. Closet] as the weakest, and I was the one who was dragged by my own teammates. I have been taking it from all directions.”

Find. The. Lie. Aiden showed up to compete in Season 12 with nothing but manners and moxie, and while I admit to not immediately “getting” her, she’s done nothing to earn this barrage of attacks. If anything, Brita should be apologizing for practically drowning Aiden in spit during their Gay’s Anatomy scenes. Besides, it’s still early in the season; if Brita is getting this petty about who may or may not end up in 11th place, I fear for how insufferable she may become in the weeks ahead.

The only queen who really stood up for Aiden while the cameras were rolling was Heidi. “The girls are just being so petty and messy,” she said in her confessional. “The constant verbal assault is starting to really piss me off. These girls keep going and going and going. It’s frustrating. Focus on your damn selves!” She then addressed her fellow queens directly, keeping her message short and sweet: “At the end of the day, it doesn’t f–ing matter! The bitch is safe. Leave her alone.” Amen.

(Side note: I completely lost count of the number of times the queens said “at the end of the day.” I felt like I was watching an all-drag production of Les Miserables — which, honestly, doesn’t sound like the worst idea for a future Rusical.)

To her credit, Brita went on social media after watching Untucked to apologize for what went down. “Instead of embracing my faults, I tried to hide it with overconfidence and aggressiveness,” she admitted.

Well Untucked just happened… 🤦🏽‍♀️I feel good about what I did in the challenge and I stand by my look on the runway; however, it is obviously not okay to bring one of my sisters down just because I was feeling a certain way. In the moment, I definitely let my sadness… pic.twitter.com/DmFLd3GvOE

A very intense #Untucked! I agree with many of you that we were coming down too hard on @Aiden_Zhane !! We love her AND her drag. In that moment a lot of feelings were flaring up, since then we’ve had time to grow closer as sisters which we hadn’t yet during filming ❤️ #DragRace

Tough episode. REALLY entertaining. Talent, compelling stories, vulnerability, & humor. I will say it again, but we love our sisters. We love Aiden, we love Brita, and we are messaging each other and talking about how gaggy it all was. We’re all good, so y’all should be too!

The saddest part about this whole situation is that, prior to the big fight, Aiden was finally feeling confident in her own abilities. “This is my first time to be put in the top of a challenge, and I am feeling good about myself and good about my performance and good about giving the judges what they asked for,” she said. “In this moment, I couldn’t ask for anything more.”

OK, time to weigh in: Do the girls need to lay off Aiden, or are Brita’s criticisms valid? Drop a comment with your thoughts on the Season 12 drama below.