This week on Hawaii Five-0, in the CBS series’ penultimate hour, everyone was wondering, “What’s wrong with McGarrett?” And by episode’s end, Danny had the answer.

After Steve accepts hand-delivery of what is later revealed to be a coded letter/cypher from Doris, we cut to a gang of goons pushing a woman and her wee kid into her home. They just robbed a bank, where one of their guys got shot, so they need a place to lay low. Luckily for the lady, the busboy (played by MacGyver alum Lance Gross) from the diner she and her son were just at shows up to return a lost trinket. The busboy gleans that something is amiss, and moments after bidding the woman adieu, he comes barging in through the back, whaling on the assorted robbers. One gets away, though — and the busboy, too, vanishes once the mother turns her back to call the cops.

Having caught this case — because “there’s always another case” — Danny tracks down Steve at his father’s grave. It’s been almost 10 years since the elder McGarrett died, while Steve himself has been through quite a tough year, with Joe, Doris and all. Producing the cypher, Steve grumbles, “Last thing I need right now is another mystery.” So they report to the scene of the skirmish with the robbers, getting the download from Tani and Quinn on the remarkably skilled busboy who saved the woman and child. Back at HQ, Five-0 realizes that said busboy was living under an assumed identity. It’s only when Adam scouts out the guy’s mailing address and finds a toothbrush/DNA that they learn who he actually is: Lincoln Cole, a Marine gunnery sergeant with the FAST (anti-terrorist) team. And, most curiously, one who went AWOL after being bestowed with a Purple Heart following a big mission. 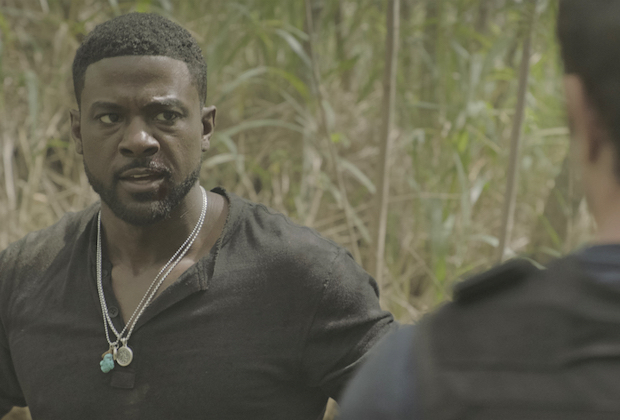 Steve and Junior pay a visit to Sergeant Major Phillips (aka blink-and-you-missed-him guest star Chuck Norris), who they know Cole had called earlier in the day. Phillips plays dumb, but Junior marches right past into his home, where he spies Cole escaping out the back. A chase ensues, during which Cole and McGarrett trade blows, strikes, kicks, what have you. Junior breaks things up with a gunshot, after which Cole gets hauled into the rendition room at HQ.

Cole stays mum, but Steve eventually gets through to him a bit, recognizing the guilt he probably feels for having lost men during the mission that branded him a hero. Cole confesses that he feels terrible guilt, having let his zeal for a big “win” lure his squad into an obvious ambush.

When masked men force a ransom video onto the TV airwaves, demanding Cole in trade for the now-kidnapped woman and child from before, McDanno debate using Cole to flush out the baddies. Steve calls the kidnapper, Hector, to report that they have Cole in custody but are about to turn him over to the MPs/prison. That’s not good enough, for Hector, though. MPs do in fact show up to claim Cole, and Steve turns him over. Cole, though, somehow escapes the transport and makes a beeline for the meet-up. There, he ensures the woman and child’s safety before turning himself over to Hector, who then promptly puts a gun to Cole’s head… before getting zinged by Junior’s sniper rifle. With all of Five-0 emerging from the nearby brush, a shootout ensues, and eventually every baddie is taken down. ”I think this guy might be crazier than you,” Danny says to Steve of Cole’s own capacity for derring-do.

Afterward at HQ, Steve informs Cole that he is free to go — that the MPs are busy with the formal review, plus no one is in a hurry to bring charges against the war hero who just saved a woman and child. Cole in turn offers to call in a favor to help Steve decode the cypher on his desk. Danny then calls, and summons Steve for a tete a tete at their beach chairs. Steve at first tries to deflect, but Danny wants to have a serious conversation about what is affecting his longtime partner.

“Something changed…,” Steve admits, adding that he came to realize that for 10 years he has been “protecting everybody except myself.” Danny suggests he simply take a break, but Steve counters, “It’s more than that.” He at one point thought the restaurant (hey, remember that storyline?) would offer “balance,” so when it stalled, he got to thinking about other ways to have a normal life.

“Do you think you’re capable of being done?” asks Danny. “Maybe,” says Steve. With Five-0, he says, “I hit the ground running, and have been running ever since,” and now he is considering “time away to get perspective.” Danny suggests that New Jersey would be a fine place to gain such perspective! Steve at first defers, “It’d be full of people like you!” And yet… now he feels almost challenged to indeed get away to the Garden State.

Danny heads into the house to fetch more beers — only to find a masked man rifling through Steve’s office. A fight breaks out, a gunshot goes off, Steve races into the house, but the burglar has escaped, and Danny is merely a bit banged up. The thief was after the cypher, Steve surmises, but unwittingly made off with just the empty envelope it came in.

To be continued, during the April 3 series finale.

What did you think  of “Part 1” of H50‘s series finale? Would you have welcomed Lincoln Cole as a new team member/leader, if there had been a  Season 11?