Superstore‘s Ben Feldman is the first one to acknowledge just how surreal it is to do an interview about his NBC comedy amid a worldwide pandemic.

“I glanced back at the episode that’s airing on Thursday, and I felt so silly looking at it,” he says. “This is so crazy that this is what I’m talking about today.”

But it’s not just any episode. For Season 5’s 19th installment, Feldman stepped behind the camera for a second time as director of the workplace sitcom. In “Carol’s Back,” Amy struggles with employees who refuse to work with Sandra’s nemesis upon her return. Meanwhile, Jonah and Cheyenne venture outside the store to attend a Raise the Wage protest.

TVLINE | How are you holding up during quarantine?
Great. Having a lot of fun. We just had a huge dinner party last night. I’m taking my kids to swim class in a little bit, and then my wife and I are going to foam party. [Laughs] No, we’re going insane. We’re losing it.

TVLINE | It’s a weird time to be doing this interview…
I had a conversation with my dad yesterday about what the government considers “essential workers” — plumbers, nannies, health care workers, stuff like that — and I was joking about how Hollywood’s kind of the opposite of essential, but we were the first ones to close down. Before my parents or anyone else thought their jobs were going to be on hold, we were already clearing off the [Universal] lot. And I think that’s funny, because when I walk my kids down the street in a stroller, and I pass a neighbor, there are only two questions: “Where are you getting your food?” and “What are you watching?” In a way, we’re the essentials right now in this bizarro land, because the only thing there is to do is [watch television].
People are going to start running out of whatever they had on their watch lists. We’re going to look back on this as the Great Catch-Up of 2020, where everyone finally gets their DVR to zero percent. And they need publications like yours to steer them in other directions.

TVLINE | I don’t think anybody is looking for a dark show to get invested in at the moment. It’s a great time for people who might not watch Superstore to catch up on Hulu.
A lot of people are looking for something light and happy. The last thing I’d want to watch right now is, like, The Handmaid’s Tale. So I’m happy [our show] is part of the “escape” category. 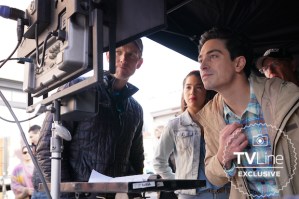 TVLINE | This week’s episode marks your second time stepping behind the camera (following Season 3’s “Lottery”). How did this experience differ from your previous directing stint?
This was definitely less challenging, because I already had done one and I knew what to expect and how to do it… The first time I directed, I spent the entire time scared to death that I was doing it wrong. This time around, I got to actually sit back, know that we were going to make our day and know that we were going to get it right, and really get to focus on the scenes and be entertained by my cast. 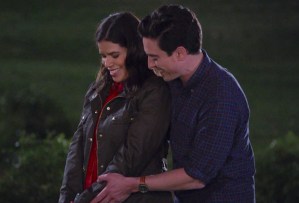 TVLINE | Superstore doesn’t venture outside Cloud 9 very often. And yet, in both of the episodes you directed, you have multiple scenes either out on the Universal backlot or on location. Total coincidence, or was that something you sought?
When you direct Superstore, for the most part, you’re getting a pretty easy thing where essentially we’re a bottle episode of a show and we don’t really go anywhere. But for some reason, every time I direct, I get a full day of outside location [shooting], establishing a completely different aesthetic. The one I did a couple of years ago was on a golf course, which is like, the opposite of what Superstore looks like. And on my second day, there was a stunt and a night shoot. And then [during] this one, the final day of shooting was a full day on location, so we were outside on the backlot.

TVLINE | And it coincided with America Ferrera’s big announcement that she was leaving at the end of this season…
That was a real crazy day on set. Listen, if you had asked me the week before if I wanted to shoot on location all day long, I would say absolutely not, no way, I’m not even considering that. And then both [times], I come out the other side being glad I did [it]. 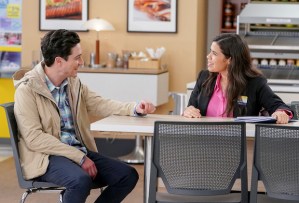 TVLINE | Jonah has really committed to the cause of workers’ rights this season, while Amy, who is still supportive of what Jonah is doing, has softened her anti-corporate stance a bit this year. Have you been surprised by that divergence and their respective evolutions?
As a fan, yes, but [America and I] have been in so many different discussions with the writers, just constantly sitting in a room and going over all the general arcs of the characters. I’d argue that Amy hasn’t necessarily softened her stance on corporate greed and fighting the man and all that stuff, she’s just in a more nuanced and complicated situation. She finds herself on this track that is pulling her towards that side, [and it’s] finally giving her the responsibility, and the paycheck, and the upward mobility that she’s always looked for, and she’s a single-ish mom of two… And then Jonah doesn’t have [kids]. He comes from this more privileged, idealistic world. [He’s] a little more Bernie Sanders, I think, and maybe Amy’s a little more Joe Biden. [Laughs]

[Amy’s storyline] is one of the things that I’m really going to miss with America being gone: juggling what is right for you versus what you think is right for the world or for your family or for your friends. 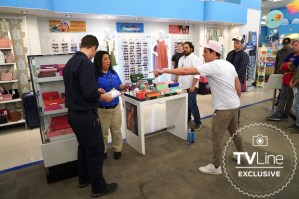 TVLINE | While much of the episode takes place at a “Raise the Wage” event, the A-story is actually focused on Carol, who has not been back at work since she nearly derailed Carol and Jerry’s wedding. What’s the mood like back at Store 1217?
Everybody is pretty horrified by [her return]. It’s the sort of thing that ripples throughout the whole store, and you see everybody’s reactions to it. Some people’s reactions are a bit bigger and more ridiculous than others, and you can probably figure out which characters those are going to be.

TVLINE | Does everyone at least try to hide from Carol how they really feel?
[They] kind of coddle her and make her feel welcome [to] keep her from doing something psychotic. So there’s a lot of that, and it’s a really funny thing to watch.