Warning: The following contains spoilers from Thursday’s revealing Station 19. If you’d prefer to watch first, read later, leave this recap like it was a house on fire.

Thursday’s Station 19 began with a collective groan from the firefighters, whom Maya was making stay after their shift to sit through a “critical-incident stress debriefing” in the wake of Rigo’s death. Travis was so tired, he grumbled, “My eyes are starting to move independently of each other.” But by the time the episode concluded, he and his fellow first-responders’ exasperated sighs were drowned out by gasps as they shared more than we — or they — expected with their therapist, Diane Lewis (Tracie Thoms, whom you’ve seen on everything from 9-1-1 to Grey’s Anatomy). Read on, and we’ll go over her session notes in detail. 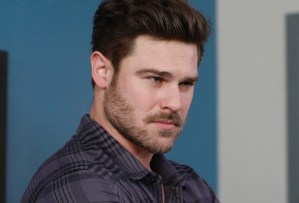 ‘YES, I AM HOLDING YOU HOSTAGE TODAY… AT EMOTIONAL GUNPOINT’ | As “Something About What Happens When We Talk” began, the B team kicked the A team out of the kitchen… unless they wanted to stay and watch as Rigo’s pals endeavored to “filet Gibson for breakfast.” Moving to the gym, Maya & Co. were told by Diane that “I know you, because I am you.” Not only had she been a firefighter, she’d been the kind who jumps out of helicopters — so the most daring of daredevils. First to have a private powwow with Diane was Jack, who couldn’t really say why he kept sleeping with Eva even after he learned who she was. And as bad as he felt, having broken the firefighters’ code, “I’ve lived through worse,” he insisted. What? When he wouldn’t answer, Diane shared that she no longer leapt from choppers because she’d shattered her leg doing so — which had led to a family losing their house and their dog. Her openness moved Jack to confess that he was sitting there thinking of the family he’d almost had, the parents who’d wanted to adopt him and his foster siblings. Then, on a dime, he switched to an anecdote about the worst call he’d ever gone on, one in which he helped a drunk old woman whose Christmas tree had caught fire. Which didn’t sound that bad. But “it was the worst,” he explained, “’cause she was all alone… She had nothing but that tree.” The recollection hitting Jack hard, he started to cry. But Diane wouldn’t give him a tissue — that would imply that she wanted him to wipe them away. She didn’t; she wanted him to get them all out. 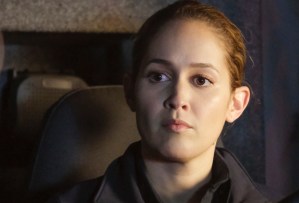 ‘WHY ARE YOU TALKING ABOUT MY SEX APPEAL?’ | Next on Diane’s couch — OK, it was an office chair — was Andy, who allowed that she was pissed at Jack for breaking the code, pissed at Maya for stealing her promotion, pissed at Sullivan for giving Maya that promotion. But “other than that, I’m pretty good.” Somehow, this led Diane to ask if Andy had been a cheerleader in high school. No, dance quad, and she preferred salsa — she’d been state champ, even. Diane was taken aback: Salsa dancing took grace, rhythm, sex appeal… Wait, said Andy. Sex appeal? “Did someone say something about me and Sullivan?” Oopsie. Nobody had. However, since she had therapist/patient confidentiality, she admitted that she was in love with Robert, even though being involved with the battalion chief made her, in her estimation, “a blight on the plight of female firefighters.” Yet she wasn’t about to give him up. With Sullivan, “I feel electric, awake all the time… This man undoes me,” she exclaimed. Mm-hm. But love by itself is calming, Diane countered. It only gets electric when it’s combined with guilt, sneaking around, stuff like that. Could Andy’s relationship have something to do with the fact that she was basically raised at the firehouse by a single dad who had been captain? “This has nothing to do with my father,” insisted Andy in a way that forced us to think that maybe, on some level, it did. Switching gears, Diane asked about Rigo. “I barely knew him,” Andy said. Yet she was able to flash back to a scene that showed his nicer side — yes, he’d had one — when he’d laughed about her over-the-top reaction to a raccoon while they’d been saving a woman from choking. Yeah, this firehouse has more issues than a magazine rack. 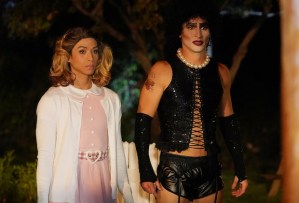 ‘I HATE MY PET RABBIT’ | When the B team was called away to a four-alarm fire, Travis picked up where they’d left off cooking food to bring Rigo’s widow. Diane was happy to talk with him in the kitchen… but not with Emmett around. So Travis sent the probie away — harshly. What’s up with that? Diane asked. “He’s in the closet, and I have no respect for him,” Travis spat. Hey, hey, Diane said. Public space. She wasn’t cool with him outing anybody. So he started using code. “My pet rabbit likes his cage,” Travis said, adding that the bunny was bullied by his father and probably didn’t even really want to be a firehare. And he couldn’t stand that his pet rabbit didn’t fight to be who he is. Maybe Travis was just extraordinarily brave, Diane suggested. He was, after all, the only out gay firefighter she’d ever met. “I shouldn’t have to be brave to be out of the closet in 2020,” he replied. When she asked why he became a firefighter, he turned the question back on her. She hadn’t wanted to go into the family business, she said. Her family ran an Irish pub, and she’d been raped in the back room when she was 17. After that, she didn’t want to go there, much less take it over. So, she told Travis her story. Would he do the same? Fine. Travis recalled an incident in which he and a friend were going to see The Rocky Horror Picture Show dressed as Frank-N-Furter and Janet when they saw through the window of a nearby house a woman being beaten by her husband. Acting on instinct, Travis had bashed in the door and tackled the guy — while dressed as a sweet transvestite from Transsexual, Transylvania. After that, he got hooked on playing the hero, and that was that. Could Travis take no pride in himself? Diane wondered. Who had given him so much shame? Travis was a brave hero, and his rabbit… he was just someone who was figuring it out, she said. When tears began to run down Travis’ cheeks, he lied that it was because of Rigo’s death. 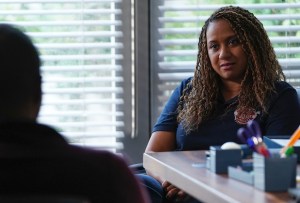 ‘I AM A HUMAN BEING!’ | During Ben’s session with Diane, he shared his upset over Vasquez’s demise. Thanks to the PRT, “I saved Rigo, and then… he threw a clot. It was like God’s ‘Screw you!’ to guys like me.” Did Ben believe in a punishing God? No, he insisted. He thought that God only punished the wicked. But what did that mean, was everyone wicked? Because Bailey sure as hell wasn’t, and she’d miscarried their daughter. Did Ben think the tragedy was his fault, then? Diane asked. Was he wicked? What was the angriest he’d ever been? In response, Ben told her about an evening that he’d been pulled over by a cop for a broken tail light… and made to lie down on the ground. Instead of enact any of the revenge fantasies he’d entertained afterwards, Ben had merely reported the incident and donated to the ACLU. So, Diane concluded, he was the opposite of wicked — righteous. 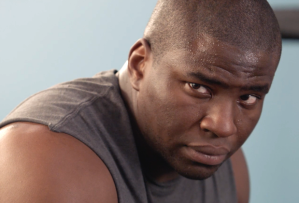 ‘GUNS LIKE THESE DON’T GROW ON TREES’ | Next up was Dean, who wanted to talk in the gym while he finished his workout. And Hughes could stay. “Anything I have to say, I can say in front of Vic,” he insisted… which gave Diane the idea that there was something he wanted his roomie to hear. And, in fact, there was. His Nigerian mother so disapproved of him having a child out of wedlock that she and his father would never meet Pru… and they were cutting him off, emotionally and financially. Vic’s reaction prompted Diane to ask if she and Dean were friends or something more. Just friends, Vic insisted. “Why is that so hard for everyone to believe?” Dean’s roomie, he added, was “the closest thing to family that I’ve got anymore.” That being the case, there was something else he needed to tell Vic: He felt that she’d sabotaged her relationship with Jackson because she’d felt guilty about moving on so quickly after Ripley’s death. In response, Vic shared that her best friend growing up had been a 90-year-old named Milton in her grandma’s assisted-living facility. When he’d died, she’d cried a lot, then she’d gotten a new best friend and hadn’t felt at all guilty about it. Same with Ripley. “I don’t feel guilty for moving on so fast,” she said, “I feel relief from the unbearable pain of losing him.” She then called Dean backwards for thinking that she should’ve asked Jackson’s permission to move in with a friend, and left. By then, Diane was convinced that there was more to the roomies than met the eye. “When we fall in love with our friends,” she said, “we often try to set them up with other people” — like Dean, in a way, had been doing with Jackson. “My gut is never wrong” about these things, she added.

‘I DON’T WANT TO BE A WIDOW’ | As Diane’s day at Station 19 neared its conclusion, Jack asked why she thought he’d broken the code. She believed that it was because he’d had a family for a year, followed by years alone, then he’d joined his firehouse family. So his body was wired to expect comfort and love to be followed by a loss as sudden and shocking as that of his parents’ deaths in a fire. In this case, he deduced, “Eva was the fire, and I burned down the family.” Only his firehouse family was still alive, Diane noted. And he hadn’t gotten Rigo killed — he’d disobeyed orders, so his own psychology had done him in. During a subsequent conversation with Maya, Diane learned that the captain blamed herself for putting Jack and Rigo together that fateful day. She further admitted that she’d thought about dying since she was 12. “It soothes me when I can’t sleep.” The way she’d been raised, to keep her “eyes forward at all times… it’s exhausting.” She wasn’t suicidal, though. “It’s an escape” — so much so that she was “a little jealous of Rigo right now.” Maybe, Diane suggested, she could learn to let herself rest now and then in this life? Apparently she got through to Maya, because that evening, she asked Carina if she could take a few days off to get away with her. #progress Elsewhere, Jack brought groceries to the Christmas-tree lady, Ben played basketball with Tuck and Joey, Vic and Dean played house but just as friends (mm-hmm), Andy and Sullivan salsa-danced, and after Eva rejected the food Travis and Emmett brought her, the probie showed up at his one-night stand’s door and kissed him like that one night was about to extend to two.

So, what did you think of the episode? Do you believe Diane is right about Dean and Vic? Do you hope she is? Hit the comments.