Picard is being held captive while Soji and the synthetics build that transmitter to summon the higher synthetics to battle the imminent Romulan invasion. He pleads with Sutra (“Don’t let the Romulans turn you into the monster they fear”), but she’s tired of having her life controlled by “organics.” Meanwhile, Narek sneaks back to the Borg cube and tells Narissa to bring the weapons system back online while he recruits some reinforcements. To that end, he approaches Rios and Raffi on their ship and asks for their help to “stop what’s coming for us.” What’s coming for them? Well, the end of all life, basically. 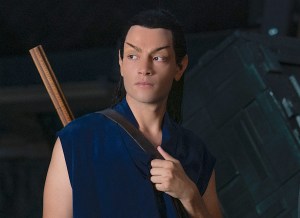 Elnor doesn’t trust Narek, since his sister killed Hugh, but Narek convinces them by recalling an old Vulcan legend about a crack forming in the sky and “a thousand days of pain.” They bring Narek back into the synthetic community as a “prisoner” so they can destroy the transmitter with a grenade. Plus, Agnes uses poor Saga’s severed eyeball (ew) to access Picard’s room and bust him out, and they return to Rios’ ship, with Picard desperate to stall the synths and fend off the Romulans long enough for the Federation cavalry to arrive. Should be a cinch, right?

Soji and the synths are ready to switch on the transmitter, but Dr. Soong knows it was Sutra who killed Saga, not Narek, and he deactivates her while Rios prepares to hurl the grenade, tucked inside a soccer ball. Soji catches it, though, and tosses it safely into space. It’s getting crowded up there, too: Hundreds of Romulans arrive, with Oh commanding them to “sterilize the entire planet,” and Soji sends out those floating orchids to keep them at bay. Back on the Borg cube, Narissa is about to zap Picard’s ship… but Seven of Nine stops her, and they duke it out, with Seven of Nine finally kicking her into a gaping void and telling her, “This is for Hugh.” 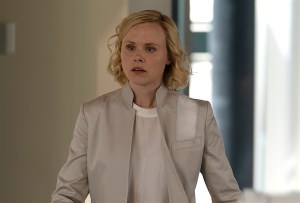 Agnes buys a little time by conjuring up hundreds of fake ships to distract the Romulans, as Jean-Luc begs Soji to change her mind, even offering up “my life” in return. But just as his ship is sent spinning and he goes pale… a massive fleet of Federation ships arrive, led by acting commander Will Riker! He informs Oh that the synth planet is now under Starfleet protection and orders her in no uncertain terms to stand down. She wants to fight, though, and Soji’s transmitter summons a black hole with terrifying snake-like synth ships crawling out of it. Jean-Luc, grimacing in pain, makes one final plea to Soji, urging her to show the Romulans she’s not the Destroyer after all: “That’s why we’re here: to save each other.” She listens… and shuts down the transmitter, sending the synth ships crawling back into the hole as it disappears.

The Romulan and Federation ships call a truce, and Riker exchanges warm words with Jean-Luc (“I’m supposed to sit around in the woods making pizza while you have all the fun?”) before he and his fleet zip away. But Jean-Luc is still struggling, and he finally collapses. The others gather around him as he croaks out some final words to Elnore and Raffi before shutting his eyes. They all weep. No! He can’t be… can he? While the others mourn, Jean-Luc finds himself back in his French chateau with Data, who’s wearing his Starfleet uniform and notes that they’re both wearing what they had on when they died. So it really happened: Jean-Luc Picard has died. Whoa. 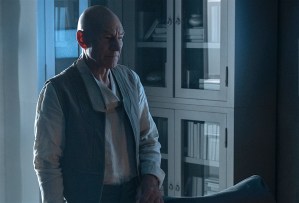 He and Data reminisce about old times as Data tells him they’re not actually in a dream, but in a simulation. Agnes and Soji scanned and transferred Jean-Luc’s brain before he died… so he’s an android now! As he regains consciousness, Dr. Soong explains he won’t have any superhuman powers, but he no longer has that brain abnormality, so he’ll live as long as he normally would’ve as a healthy human. Jean-Luc honors Data’s wishes and holds his hand as Data’s consciousness is terminated, before he reunites with Soji and the rest of his crew on Rios’ ship. The ban on synthetics has been lifted, which is good news for her… and now for Jean-Luc. So they set off on a brand new mission together — one that Jean-Luc kicks off by saying, “Engage.”

Alright, Trekkies, it’s your turn: Grade the finale, and Season 1 as a whole, in our polls, and then beam down to the comments below to share your thoughts.