One Day at a Time kicked off its inaugural season on Pop TV by reflecting on its past and looking towards the future.

After a not-so-subtle jab at its former streaming home, in which Alex declared that “there’s nothing good on Netflix anymore,” the Season 4 premiere turned its attention to a special visitor: sitcom veteran Ray Romano, who played census taker Brian. His arrival prompted everyone to reflect on their relationships, as well as what else the future may (or may not) have in store for them.

For Penelope, that meant realizing that she doesn’t want to be alone. After an unsuccessful date in which she kept thinking about Max, she decided to go visit her ex-boyfriend at the hospital, only to find out that the hunky EMT has accepted a job overseas. Meanwhile, Schneider asked Avery to move in with him, Elena and Syd contemplated what it would be like to be apart, and Alex let slip that he has a girlfriend — much to Lydia’s chagrin.

Below, co-showrunners Gloria Calderón Kellett and Mike Royce break down the aforementioned Netflix jab, as well as obtaining Ray Romano’s services. They also preview what’s ahead for the Alvarez family…

TVLINE | Talk to me a bit about the the tongue-in-cheek reference to Netflix. Did you always intend to address the cancellation in some way?
KELLETT | One of the writers pitched that.
ROYCE | We weren’t even going to do [it], to be honest. I think it was [executive producer] Dan Signer [who pitched it], I could be wrong… We filmed a couple different versions. We had one joke that didn’t have anything to do with [Netflix], but you know what? [We decided to] have a little fun.
KELLETT | I was just going to say that we’ve seen everybody in the year [since we were cancelled]. We’ve seen [Netflix’s Chief Content Officer] Ted [Sarandos] and [Vice President of Original Content] Cindy [Holland] and all of our executives… It’s all fine. We were more delighted by how the media covered it. 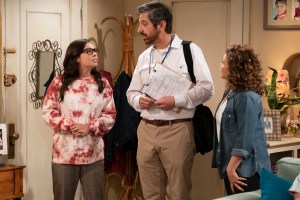 TVLINE | Mike, you previously worked with Romano on Everybody Loves Raymond and Men of a Certain Age. Was getting him on board as simple as calling in a favor?
ROYCE | He f—ked up. [Laughs] He called me about something completely unrelated, and I was just thinking I should call him, and I was ramping up my whole speech… I was like, as long as we’re talking, “One scene, you come in, you hit us some home runs, you get out and send our show off with a high rating from the start.” He was very gracious to come do it, and he had a blast.

TVLINE | What was it like being back on the set of a multi-camera comedy with him, nearly 15 years after Raymond ended?
ROYCE | We were going to give him the courtesy of shooting him out without the audience there, just because we were trying to get him in and out as quickly as possible. But then he showed up at the table read, and he had such a good time that he was like, “Yeah, I should film in front of the audience maybe, right?” So, then he came for our first studio audience [taping], which was an even bigger deal, and [he was] pitching jokes. He was right back in that mode again.

TVLINE | Romano’s census taker is used as a conduit to introduce the Alvarez family to new viewers, but the census is also the sort of issue that ODAAT has been known to discuss…
KELLETT | It was very important to us [to discuss the census], and it was on a list of a bunch of issues we had hoped to talk about. Latinx people are very underrepresented and have a lot of fears surrounding the census, especially those that are undocumented, and they don’t know that they don’t have to reveal whether or not they’re a citizen for the purposes of the census. Vincent Brown, one of our writers, is the one that really put it into context [as] a great way to introduce the family very quickly and the relationships they have with one another. 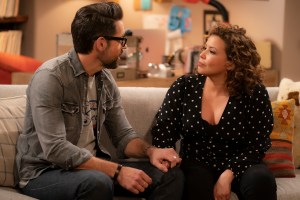 TVLINE | In the Season 3 finale, Penelope told Berto that she didn’t need to find someone to be happy. But in tonight’s premiere, she put herself back out there and went on a date, then tried to reconnect with Max. Why the change of heart?
KELLETT | I don’t know if it’s so much a change of heart as it is a realization as a woman that you can have everything you want without a man, but that doesn’t mean you don’t want to kiss boys anymore. You know what I mean?
Penelope was somebody who got married young and had kids. Speaking as a woman this age, I think that you are taught that you go to high school. You go to college. You graduate. You meet your husband. You get married. You have a boy. You have a girl. You pursue your dream, right? Like, these are the things we’re told to do, and divorce is not something she saw in her life, especially as a Catholic Latina woman, never. And so she had to sort of reframe [her life]. And then over the course of three seasons, we see that she’s able to do it. She’s able to be mother to these children, to care for her own mother, to live out her dream of being a nurse practitioner, and now what? Right? So it seems like just a natural progression of now she’s gotten everything she wanted. 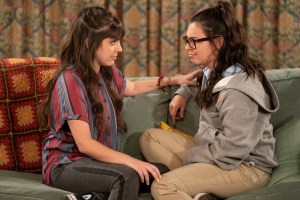 TVLINE | The first episode also revealed that Elena and Syd intended to break up before Elena goes away to college, before they ultimately realized that they’re incapable of spending any significant amount of time apart. What’s in store for that relationship this year?
KELLETT | I think it’s just going to be tested… They’re the longest relationship on the show right now, and relationships do get more complicated. As these two young people are about to venture out into the world, they’re going to be faced with things that people deal with in relationships when you’re together for a long time, [and] it’s exciting to see these they’re going to be put through the paces and how their relationship will take that.

TVLINE | And then there’s Alex, who revealed to Penelope, Elena and an eavesdropping Lydia that he has a girlfriend. How’s that dynamic going to play out moving forward?
KELLETT | Raquel Justice, who plays Nora, is pretty gosh darn charming… There’s a little fun that we have [in Episode 2], but ultimately, she’s a pretty great partner to Alex.

TVLINE | How long is it going to take Lydia to warm up to this new woman in her grandson’s life?
KELLETT | Not long. [Laughs] 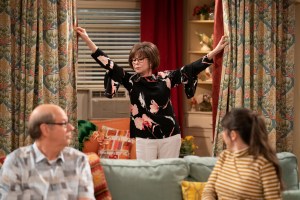 TVLINE | We never found out what happened during Lydia and Dr. Berkowitz’s trip to Cuba. Will that be addressed in a subsequent episode?
KELLETT | We talk about it about halfway through the season. It’s a very, you know — for the Cuban community, going to Cuba is not a vacation. It’s a very heavy thing. My parents will never go back. For the family members of ours who have gone back, it’s sort of a personal and spiritual experience for them, and we are very respectful of the process that they have to go through before sharing what that journey was for them. So that’s what the [Alvarez] family does.

What did you think of ODAAT Season 4, Episode 1: “Checking Boxes”? Grade it via the following poll, then hit the comments with your reactions.