NBC convened its Council of Dads this Tuesday night, with a sneak preview airing more than a month ahead of its Thursdays-at-8/7c premiere. Will you (remember to) follow the family drama to its regular home?

Inspired by Bruce Feiler’s book of the same name, Council of Dads‘ verrrrry table-setty pilot opens up in the summer, where we meet Scott and Robin Perry (played by Tom Everett Scott and Prison Break‘s Sarah Wayne Callies) and their already sizable Georgia family: Luly (Love Is___‘ Michele Weaver), Scott’s daughter by another woman, who is waiting to hear about a New York City internship; Theo (Emjay Anthony), who is rarin’ to get his driver’s license; Anne Frank-obsessed Charlotte (Thalia Tran), whom Scott and Robin adopted; and JJ (Blue Chapman), who is hoping to brave a rope swing into the lake before braving the first grade.

And then the phone rings.

Scott has an aggressive cancer in one of his legs. He undergoes surgery, at the hands of his longtime friend/OBGYN Robin’s colleague, Oliver (Agents of SHIELD‘s J. August Richards), after which he hobbles around on crutches. As the seasons pass, one by one, we learn a bit about the kids — but mostly Luly, who goes from “reuniting cute” with a former high school classmate, Evan (13 Reasons Why‘s Steven Silver ), whom she winds up working with at the crab shack her Dad owns. Along the way, we also meet Scott’s other friends: Anthony (Taken‘s Clive Standen), who after college went to culinary school abroad while Scott stayed in the States to raise Luly, and Larry (everything’s Michael O’Neill), whom Scott met and sponsored at AA (and who at one point counsels Theo to let go of his pent-up anger before getting behind the wheel of the family pick-up). 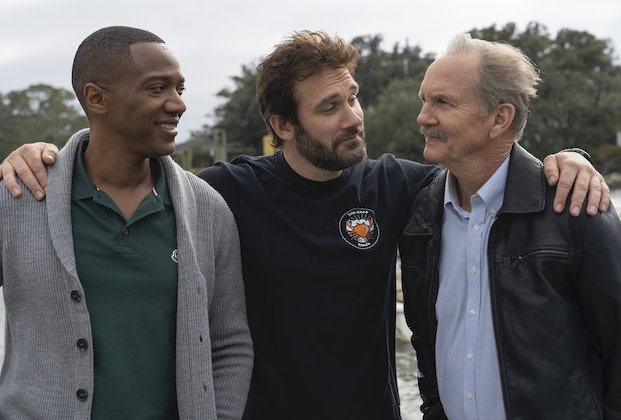 Around the house, we see Scott labor to impart heavy dollops of wisdom on the kids, which irks Robin a bit; he, though, simply recognizes that his future is an uncertain one. In fact, to that end he wants to assemble a “council of dads” to hypothetically help Robin if the cancer comes back. Robin scoffs at the notion, but in nixing one of Scott’s early nominees accidentally appoints herself the head of said “council”!

The Perrys then discover that any potential council will have no fewer than five kids to lord over, seeing as Robin is pregnant via much “life-affirming” sex she and Scott had following his initial diagnosis/surgery. As another season passes, she gives birth to a daughter, Hope — literally right before Oliver drops a bomb: Scott’s cancer is back.

And this time, it would win.

We cut to the Perry home following Scott’s funeral, where Robin assigns “council” members Oliver, Anthony and Larry some of their first tasks. That includes cheering up a hiding Charlotte and setting straight a grandma, who — contemporary-but-somewhat random plot point alert — insists on calling/dressing JJ a girl, even though the first-grader identifies as a boy.

Another season passes and Luly is marrying Evan (soooo much plot being burned through!), with her “dads” taking turns walking her down the aisle. At the backyard party after, Robin worries aloud about replacing Scott as the “fun” parent, but Oliver reassures her that she will do just fine.

What did you think of Council of Dads? Will you follow it to Thursdays on [checks calendar] April 30?