SEAL Team‘s Sonny is about to be dealt a blow after nearly trading blows with a poser at a posh bar, as seen in this exclusive sneak peek.

When last we tuned in, Sonny (played by AJ Buckley) and Full Metal (and apparently also Trent!) had unexpectedly turned up at the bar where Clay was hanging out with Rebecca and some D.C. biggish-wigs. When Sonny caught wind that some pretty boy was regaling ladies with his faux SEAL status, he did what Clay wouldn’t and entrapped the bro in his lies. Verbal push then came to shove, but luckily the skirmish was snuffed before it got brutal.

Nonetheless, this Wednesday at 9/8c, Sonny is called on the carpet this week by Captain Lindell, and in the sneak peek above, you find out that he has been benched from Bravo’s imminent three-month deployment to J-Bad, to instead attend advanced armory school, back in Texas. 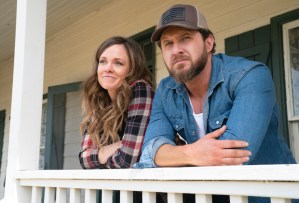 What does Sonny think about his unplanned trip home, and Jason (David Boreanaz) letting it happen? Press play above for the intense exchange of words.

Among the faces we will meet during Sonny’s upcoming return to the Lone Star State are his childhood friend Hannah (played by Witches of East End‘s Rachel Boston) and his father (I presume) Emmet, played by Carnivale‘s John Savage.

Elsewhere in the episode “Last Known Location,” Clay considers a new career path and Jason faces pressure from Capt. Lindell to consider the next phase of his career.