A brash, inexperienced President thrust into an unimaginable crisis… hmmm, that does sound a little familiar, doesn’t it?

Homeland‘s current season (airing Sundays at 9/8c on Showtime) was filmed and wrapped well before the coronavirus pandemic brought the world to a screeching halt, of course, but VP-turned-President Ben Hayes — played by True Blood veteran Sam Trammell — is facing a pretty dire situation himself after Beau Bridges’ President Warner was killed in a helicopter crash in Afghanistan, forcing Hayes to take on a role he clearly was not ready for. And Hayes’ stubborn, tough-talking demeanor was inspired by some of today’s politicians in Washington, Trammell tells TVLine.

“I think [executive producer] Alex Gansa wanted to reflect a little bit what’s happening currently, without being obvious about it,” he says, adding that Gansa told him the character of Hayes is based on several unnamed Congressmen. “This is somebody who’s come in, and he doesn’t have a lot of experience. He’s a little naïve. He’s a little out of his league.”

To be fair, Hayes was suddenly propelled into the Oval Office in the midst of an international tragedy; while Carrie and Saul scramble to find out what really happened to the President’s helicopter, many — including Hayes — believe it was an act of aggression by the Taliban. Hayes, who is “definitely more of a hawk,” is “honestly shaken and angry about it, and scared,” Trammell notes. “But he’s also thinking politics, too. He’s thinking: What do the American people want?… How does the United States look to the rest of the world? Are they going to fight back, or are they just going to take it?”

Hayes’ lack of experience has been evident in recent weeks, as he turned to his chief of staff David Wellington, and later Afghan VP G’ulom, to advise him on which tactics he should take to stem the crisis. “He probably feels like the emperor with no clothes,” Trammell says, “but he doesn’t want to appear that way… He’s sort of a lone wolf right now, where he is. He doesn’t have a lot of support.” 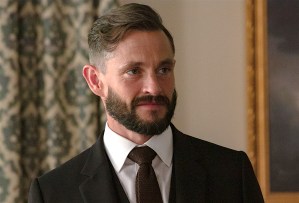 He gets some support, though, with the arrival of Hannibal star Hugh Dancy as John Zabel, a slick political consultant whose hard-line views closely align with Hayes’. (Dancy makes his Homeland debut in this Sunday’s episode.) Zabel is “somebody that [Hayes is] going to be bringing on, who does share [his] views and [his] opinions,” Trammell hints. “He’s going to be somebody [Hayes] can confide in, and he’s someone who might be a little threatening to Wellington… there’s going to be a little bit of conflict there.”

Zabel is also not a fan of Saul Berenson, which puts Hayes and Zabel directly in opposition of Carrie and Saul’s mission to retrieve the black box recorder from Warner’s helicopter and exonerate Taliban leader Haissam Haqqani. As Trammell points out, Saul and Wellington both shared an agenda with Warner since they started out in his administration… “so there are definitely conflicting agendas happening.”

Homeland fans, drop your thoughts on the final season so far in a comment below.