Will The Flash learn that Iris is a phony? Is Manifest about to board some VIPs? What is Legacies‘ Landon up to? Is Brooklyn Nine-Nine gonna make you bawl? Read on for answers to those questions plus teases from other shows!

Is The Flash‘s Barry going to figure out that that’s not his iris? Especially after Wally’s warnings and Joe’s suspicions? –Noya
“Yes — and the audience won’t have to wait until the end of the season for this to happen,” showrunner Eric Wallace tells the Inside Line. But wait! Here comes the Be Careful What You Wish For part. “However, there will be tragic consequences to learning the truth about Mirror-Iris,” the EP warns. “Consequences that will send the season in a new, even more dangerous direction for Team Flash.” (Reminder, The Flash is now set to resume Season 6 on April 7.)

Is there any scoop you can share about Manifest? Particularly about Grace and Ben? –Alyssa
“The strength of Ben and Grace’s marriage and partnership will be tested in the [April 6] season finale more than it has been since we first met them,” showrunner Jeff Rake previews. “As will the friendship between brother and sister Ben and Michaela. The s–t is going to hit the fan.” Until then, he teases, “We’ve yet to meet three of the most important characters of the season. But we will next week.”

Anything on Chicago P.D.’s Atwater? –Sophia
Remember the officer who put a gun to Atwater’s head while he was undercover last season? Well, “Atwater is forced to work with that character during an assignment,” showrunner Rick Eid previews. Also on tap for this season, as hinted in a brand-new promo: “Somebody from Rojas’ past presents himself.”

Can we expect any emotional Brooklyn Nine-Nine episodes? –Brenna
I delivered your Q to show boss Dan Goor, and he shared, “Let’s just say I cried multiple times.”

Anything on Brooklyn Nine-Nine? –Eloise
There’s this highly specific spoiler, again from EP Dan Goor: “Scully’s fart candle will help save the day.” As it should.

Are Ben Ryn and Maddie still together in Siren Season 3 (premiering Thursday, April 2 on Freeform)? –Ashley
“As we saw at the very end of last season, Maddie is already sensing that Ben and Ryn might not be telling her the full truth about what happened when reporter Ian Sutton died,” EP Eric Wald reminds. “This will create complications in the relationship. While they all are very much in love and deeply connected, their romantic bond will be affected — which opens the way for a new romantic partner in Maddie’s life.” 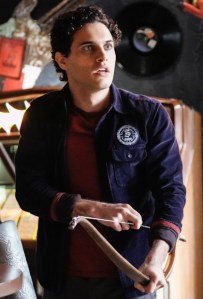 I missed Landon on last week’s Legacies. Was he really off “training”? —Toni
Not only was he indeed learning how to master his new power of flight, but Landon was also preparing for what could be a very reluctant showdown with someone he cares about. “Landon is very much wrestling with what these powers mean and how he can use them for good,” executive producer Brett Matthews says. “In an episode where you have Josie going dark and using her powers for ill-intent, I think Landon only ever wants to use his powers for the greater good. That’s the interesting dichotomy between those two characters, and it’s definitely something that will come into play in the coming episodes.”

Is there hope for Chicago Med‘s Will Halstead and Natalie Manning to get back together? –Carlynn
“I don’t think either of them ever really get over [their feelings],” executive producer Andrew Schneider says. “They’ll always carry feelings for one another. Whether they’re able to blossom again is another issue.”

On Chicago Med, Are we going to get anymore information about Crockett’s past? –Meem
“His past will be revealed going forward. We’ll understand him much more,” EP Andrew Schneider promises. In the meantime, the doc’s dynamic with Natalie is “progressing. That also will be part of the rest of the season, their relationship and what it might or might not turn into.”

Anything new on Good Trouble? –Becky
Now that Davia and Dennis have acted on their feelings for each other, “there’s a lot of interesting things we’re dealing with,” executive producer Joanna Johnson says. “These are two people who are kind of both broken in many ways, especially when it comes to relationships. So they’re going to have their struggles.” Plus, the pair both reside at The Coterie, which brings up the question of, “How do you how do you sort of date someone that you are already living with? Suddenly, the boundaries change, and all the complications of that.” 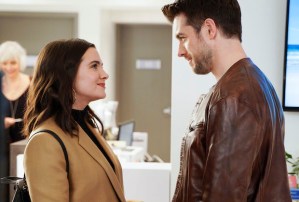 I’m a little worried about The Bold Type‘s Jane and Ryan. I feel like Ryan isn’t saying something regarding his time on the book tour when he kissed that girl. Will we get more insight on that soon? –Stephanie
Showrunner Wendy Straker Hauser promises, “Things will become much clearer for Jane and Ryan this week.”

Do you have any information on when Bulletproof Season 2 is going to show, or where I can find it? –Lucy
Across the pond, as they say, the UL cop drama drops Season 2 this Friday. Stateside, Season 2 was likely to hit The CW not until this summer, just as its freshman run did last year, though in these coronavirus-altered times, scheduling is very much “up in the air,” I’m hearing.

On Charmed, Mel and Maggie have both received their new witch powers Molecular Manipulation and Foresight, will we finally see Macy getting her new witch power? –Remon
I relayed your Q to co-showrunners Liz Kruger and Craig Shapiro, and this is what they came back with: “Magic Eight Ball says…outlook good 🙂 .”

How many episodes will Karla Souza be in when HTGAWM returns? –Terry
No one is parting with the slightest detail, but sources assure me the original cast member will be seen during the ABC drama’s final six episodes (which kick off Thursday, April 2), and that Laurel’s storyline will wrap up in a “satisfying” way.

Real questions from real people get real answers! If you want the Inside Line on a favorite show, email InsideLine@tvline.com! Questions left in Comments will not be read and may count against your final score. (With additional reporting by Vlada Gelman and Andy Swift)