The list of TV shows you can watch during self-quarantine is already plenty long… but Hulu has added another title, just in case.

The streamer’s new drama Little Fires Everywhere debuted late Tuesday night with three episodes; future installments will drop every Wednesday. Before you tell us what you thought of Episode 1, though, let’s recap what happens in the series premiere.

An adaptation of Celeste Ng’s 2017 novel (which I read, loved and, regrettably, wish was honored a bit better by Hulu’s version), Little Fires Everywhere stars Reese Witherspoon as Elena Richardson, a Type A mother of four who plans and gossips her way through life in Shaker Heights, a suburban Ohio town. When Little Fires begins, Elena is tearfully watching her family’s gorgeous mansion go up in flames. Later, the authorities tell Elena and husband Bill (The Affair’s Joshua Jackson) that the house fire didn’t just happen; it was set intentionally, and whomever did it actually started little fires everywhere around the house. Immediately, the cops suspect Elena and Bill’s rebellious daughter Izzy.

The show then jumps back four months earlier. On her way to work — Elena is a part-time reporter for a local newspaper, and a part-time landlord for a duplex in town — she spots a parked car that’s packed with stuff, and it looks as though a woman is living out of the vehicle. Claiming the best of intentions, Elena reports the car, which we learn belongs to Mia Warren (Scandal’s Kerry Washington) and her teenage daughter, Pearl. Mia makes her living as an artist, which prompts her and Pearl to move around quite a bit whenever Mia’s finished with her latest project. This time, they’ve landed in Shaker Heights… and things get off to a bumpy start when a cop arrives, asking them to drive off.

Coincidentally, Mia and Pearl end up touring the very duplex that Elena manages, and the entire visit is coated with tension between Mia and Elena; Mia doesn’t know that Elena reported her car, but she’s also not here for Elena’s chipper, kinda-judgy demeanor while presenting the duplex. Mia and Pearl nearly walk away from the property when they learn they can’t rent month-to-month — but when Elena spots Mia’s car and realizes it’s the one she reported, she bends the rules a bit and rents to them on the spot. (Pearl is elated to have her own bedroom for the first time, and Elena guiltily picks up on her joy.)

The awkwardness between Mia and Elena doesn’t dissipate much throughout the first hour. When Elena realizes that Mia is working nights at a local Chinese restaurant, she offers Mia a housekeeping job at her own home, which she changes to “house manager” after Mia insinuates that the offer is insulting. (And she turns it down, of course.)

Pearl, on the other hand, is a big fan of the Richardsons. She forms a fast friendship with Elena’s son Moody — and Moody is obviously crushing on Pearl hard, while Pearl seems more interested in his brother, Trip — and she starts to spend more and more time at the Richardsons’ house after school, much to Mia’s chagrin. 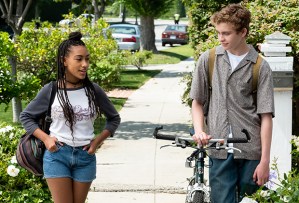 The tension boils over near the end of the episode, when Pearl and Moody are caught trespassing in a nearby junkyard. They aren’t in any real trouble; in fact, the man who escorts them home isn’t a police officer, but a member of Shaker Heights’ neighborhood watch. Still, Mia is furious that Pearl could be so careless when she and Moody would likely have very different experiences with the cops. Elena assures Mia that “there’s no reason to be this upset,” but Mia has had enough. After the Richardsons go home, Mia and Pearl blow up at each other, with Pearl implying that Mia doesn’t care about her happiness nearly as much as Elena cares about her children’s. There’s a lot of yelling and crying… but, on a happier note, Pearl and Mia still do their secret “I love you” knock through the wall that separates their bedrooms. (Aww.)

Meanwhile, Elena has her own issues with daughter Izzy, who refuses to fit the perfect suburban mold that Elena, Bill and the other kids do. Izzy’s only 14, but she’s already furious about the world’s many injustices, including the fact that her parents enrolled her in orchestra camp. About halfway through the episode, Izzy burns off an entire chunk of her hair (just for fun, it seems), and a scandalized Elena takes her to the salon to get it evened out.

Later, just before taking the stage for her orchestra camp’s big performance, Izzy is called a freak by one of her former friends — and, having reached a breaking point, Izzy writes the words “Not Your Puppet” on her forehead and goes on stage that way. Instead of playing her violin during the concert, Izzy merely sits and stares daggers at her family in the audience, showcasing the words on her face. (That night, Elena almost enters Izzy’s bedroom to have a talk with her, but she thinks better of it and walks away. Izzy notices her mom’s shadow approaching the door, standing outside of it for a moment and then walking away, and she seems disappointed that Elena didn’t come in.)

The next day, Pearl and Mia resolve their fight more thoroughly. Mia offers to paint Pearl’s entire bedroom, indicating they’ll be in Shaker Heights for a good long while, then presents Pearl with a bike she made from spare parts. Mia even extends an olive branch to Elena, accepting her offer to be the Richardsons’ new housekeeper… but, in a worrying turn of events, Elena later calls one of Mia’s references, only to hear that the man has never heard of a Mia Warren.

Throughout the premiere, Mia has a recurring nightmare. In the first one, she’s on a subway train, and a man (played by Grey’s Anatomy’s Jesse Williams) keeps staring at her, making her uncomfortable. In the next, something similar happens: Mia is on the subway again, with her head in the lap of a woman played by The Good Wife’s Anika Noni Rose. Both of them look content, and Mia kisses the woman’s hand.

But on the other side of the train, a different Mia — this one looking very worried — watches them sadly, before catching the eye of Williams’ character once again. The man stares at Mia hard, and then he briefly turns into Elena, who looks at Mia with a concerned expression before breaking into a wry grin. On both occasions, Mia wakes up in a cold sweat, crying.

At the end of the hour — with no idea that Elena is currently calling her references and having second thoughts — Mia gets to work in her darkroom. She develops a photograph: a candid shot of Elena leaning out of her car window, smiling.

OK, your turn. What did you think of Little Fires’ first episode? Grade it in our poll below, then drop a comment with your full reviews.