A big secret is finally out in the open after Chicago Med‘s milestone 100th episode, leaving one couple’s fate up in the air.

After doubling up on her IVF hormones and falling sick, April tells Ethan that she really wanted to give him a baby. “I just wanted to make up for…” she trails off from her hospital bed. When he rejects the idea that she has anything to be sorry about, April reveals that she kissed Crockett the night that her beau left for deployment.

“I’m sorry,” April tearfully pleads. Needless to say, Ethan is shocked and hurt. When he starts to angrily get up, April adds, “It wasn’t his fault. It was mine. He had nothing to do with it.” But that doesn’t stop Ethan from confronting Crockett and shoving him several times before Chicago P.D.‘s Platt steps in — because Platt can always be counted on, even when it’s not her show.

Later at Maggie and Ben’s wedding, April looks around for Ethan, but he’s nowhere to be found. She and Crockett, however, do spot each other in the crowd. He stands next to Natalie, who whispers, “You hit on April? I was beginning to think you were a good guy.”

“Whatever gave you that idea?” Crockett replies, after which Natalie very pointedly steps away from him. 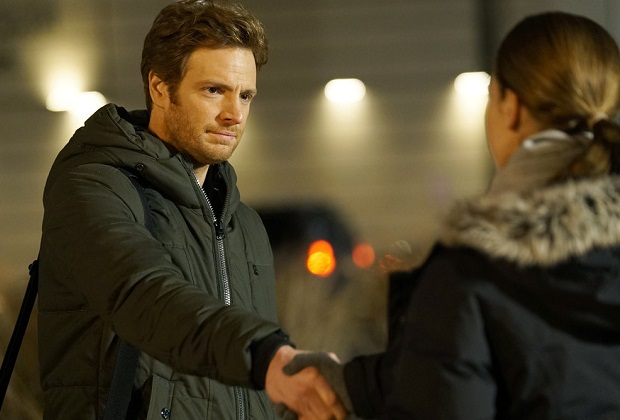 Elsewhere in the episode, Hannah returns to work after completing rehab, prompting Will to try to make amends by requesting her services on April’s case. Initially, Hannah gives him the cold shoulder for so publicly outing her addiction.

“You’re an excellent doctor. I believe in you,” Will tells Hannah. “I wasn’t about to let you throw your life away. And if I had to do it over, I’d do the same thing.”

Eventually, Hannah admits that she was in too deep and that he was right to turn her in. “If I’m honest with myself, what you did was what I needed,” she confesses to him. “It has not been easy. You gave me my life back.” Then Will invites her to the wedding, and she accepts.

Also at the ceremony, which is moved to a bowling alley (fun!) after Maggie and Ben’s initial venue springs a sewer leak (eek!): Dr. Charles and his adolescent daughter (Better Things‘ Hannah Alligood), who’s been feeling neglected by her dad.

What did you think of Chicago Med‘s 100th episode? Grade it below, then hit the comments!