This week on The Flash, Cisco and Cecile endeavored to exorcise Eobard from Nash, while Barry, Joe and Mirror-Iris encountered Black Hole’s sunny new assassin.

After Barry was outfitted with a SpeedGauge with which to monitor his now-limited levels of exertion, he, Cisco and Caitlin paid a visit to the Pipeline, where they thought Nash had reclaimed control of his body. ‘Cept he hadn’t. Instead, Thawne tricked Cisco into overloading a gizmo that allowed him to escape his cell. Barry caught up to Thawne and was rarin’ to hand-vibe him to death, but he just barely held back as an aghast Caitlin arrived on the scene.

Cisco set out to exorcise Thawne from Wells, using Cecile to “monitor” what the strapped-down Wells was feeling/ sense when Nash was back. Inside Wells’ mind, Thawne taunted Nash with the memory of how he lost daughter-figure Maya, during some sort of year-ago treasure hunt. When Nash refused to enter a cave and confront that memory, Thawne was able to tap into his Negative Speed Force and as such nearly escaped his shackles at STAR Labs — but Cisco/Cecile just barely managed to subdue him. 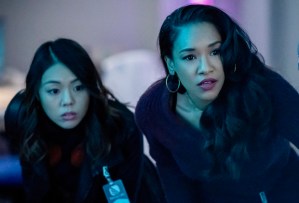 Barry meanwhile got involved with Black Hole’s new light-based assassin, Sunshine aka a former military gal who can bend sunlight and melt steel. Sunshine first appeared when Mirror-Iris and a newly mirrored, not-dead Kamilla went to Mercury Labs to steal a Prismatic Refractor for Eva. Frost showed up to handle things, but got distracted/waylaid when Barry ignored her advice and also raced to the scene, hopped up on Velocity-X. Nonetheless, the robbery was foiled, and Joe took custody of the evidence, much to Mirror-Iris’ chagrin. Later, Sunshine tried to intercept the refractor’s transfer to ARGUS, but Joe and Barry set a trap by luring her into the CSI lab, where Barry quickly shuttered all the windows, rendering her an “ordinary thief.” (Taking advantage of a metahuman’s “limits” was an idea Barry got earlier from Mirror-Iris, who had to fumble her way through another wifely pep talk.)

Back at STAR Labs, Cecile realizes that Nash is caught in “a loop of remorse and sadness,” and thus is unable to seize control. Barry gets the idea for them to “go inside” Wells’ mind, using that forehead thingy from the Thinker days. There, Cisco urges an apoplectic Nash to confront the cave memory, which he does — and we/he realize that it was his fault that Maya/Allegra’s doppelgänger died, slipping from a ledge instead of letting go of the “prize” they sought. Barry meanwhile refused to let Thawne taunt him any further about being a bad father to Nora, by stifling her powers during her visit. That, coupled with Nash’s escape the remorse loop, expelled Thawne from Wells’ body (though Nash must still share it with all the other Wellses). Coming off that mission, Barry realized that to create his own Speed Force, as Thawne had taught Nora to do, Barry could take a cue from his and Iris’ daughter’s journal.

Elsewhere this week, Eva, as mentioned above, tasked Mirror-Iris and -Kamila with retrieving the Prismatic Refractor, which they managed to do while Barry and Joe were busy trapping Sunshine. Eva grouses that while her husband may have stopped looking for her, he still seems to covet her “toys.” But now that she has the refract to power her R-CEM (?), “as long as we stick to my plan, success is assured,” and Eva will be one step closer to “liberation.”

What did you think of “The Exorcism of Nash Wells”?