The line for the Waverider’s lone bathroom will be a little less long, now that Legends of Tomorrow‘s Ray Palmer and his new bride, Nora, have bid the team adieu.

Much of this Tuesday’s episode saw Ray valiantly trying not to tell best buddy Nate that this latest mission would be his last. Helping matters, Nate at one point turned their stop in Elizabethan England into an impromptu bachelor party. Soon enough, however, Nate overheard Ray confiding in William Shakespeare his anxiety about telling his best friend his news. So, with the ring belonging to the Loom of Fate secured, and any semblance of superheroes erased from Bill’s Romeo and Juliet, it was time for emotional goodbyes. And make no mistake, the exchanges were truly emotional.

When asked if the tears we saw flowing on-screen were real, exiting original cast member Brandon Routh assured TVLine, “All of them. Everything.” Even when he was acting opposite air, in his scene with the ship’s AI, Gideon.

“Thank you for everything, Gideon.
And take care of the Legends for me.”

“There’s nobody there — I’m saying goodbye to an empty space — but I gave a lot of my heart and soul to the show and to this character,” Routh relates, “so just saying goodbye to Gideon, who has been a crucial part of our show, and knowing I wasn’t going to be back there was very very powerful for me.”

“Who woulda thought that we would still be here,
and that we’d be saying goodbye already?” 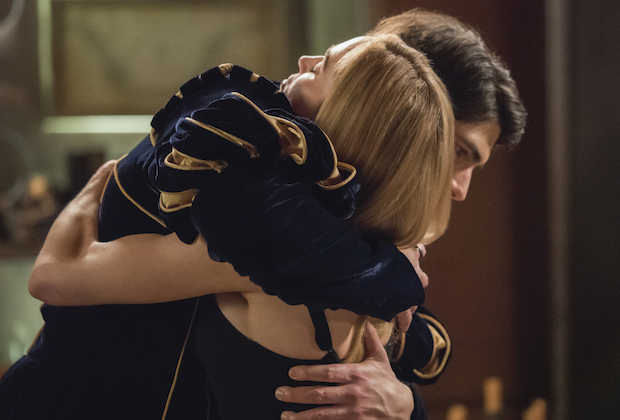 Earlier in the hour, Routh had his goodbye scene with Caity Lotz’s Sara Lance, though he had to rein things in a bit so he could go bigger, later. “That was kind of restrained because I still hadn’t said goodbye to Nate, plus she was trying to pep talk me…. That was a hard one because I had so much emotion that I couldn’t let out yet.”

Routh also laments that while he and Lotz shared one final scene, the CW series’ other original cast member was left out in the cold. “There was no real goodbye to Mick (played by Dominic Purcell) in there. Kind of a missed opportunity,” he notes.

“Ray, I am so sorry I lashed out at you. It was just a lot
to process and I didn’t know how to say it.
Thing is, I’m really sad, but I’m really happy for you guys.”

“I’m sorry that you found out the way you did. I wish there was
some way that everything, and nothing, could change all at once.”

“This totally sucks. I love you, too.”

Last but not least, Routh says that Ray’s goodbye with BFF Nate “obviously” was an emotional moment for him and costar/good friend Nick Zano — even though they had to splash around in those very real waterworks multiple times.

“One of the cameras went down and wasn’t working, so we had to do that scene two times more than we were supposed to, on both sides of the coverage,” Routh reports. “But thankfully we were both ‘in’ it, and both emotionally distraught about the whole thing.”

And as a result of the actors’ off-camera friendship, “There was so much truth in the scene,” Routh says. Along with the aforementioned Gideon goodbye, “I’m proud of both of those moments.”